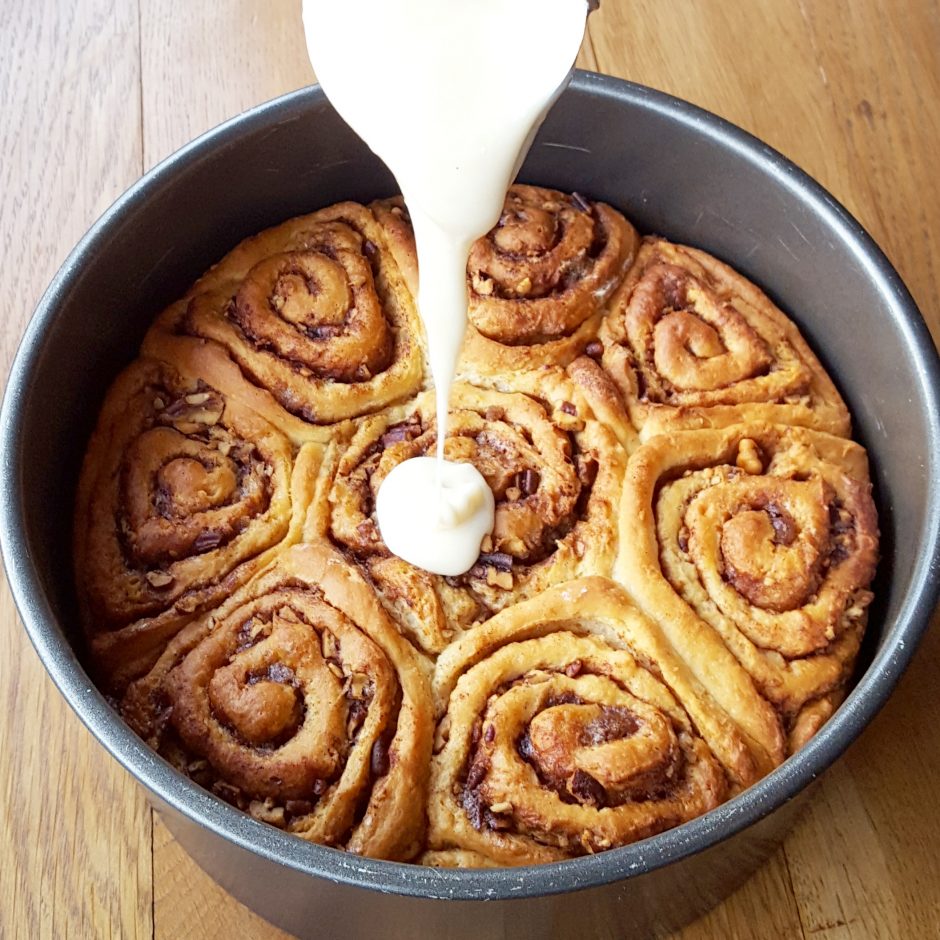 I recently saw this video for Cinnamon Buns on Tasty on Buzzfeed, and watching the video, my tummy immediately started rumbling and my mouth started watering. The video made it look so easy I popped straight to the supermarket to get a few ingredients I didn’t have in the kitchen, then set about making them. I did think the buns could be bettered with some chopped toasted pecans in the filling so I’ve added that in. Obviously, if you can’t eat nuts, take them out.

You can watch the video here…

In a large bowl, whisk together warm milk, melted butter, and granulated sugar. The mixture should be just warm, registering between 100-110˚F. If it is hotter, allow to cool slightly. 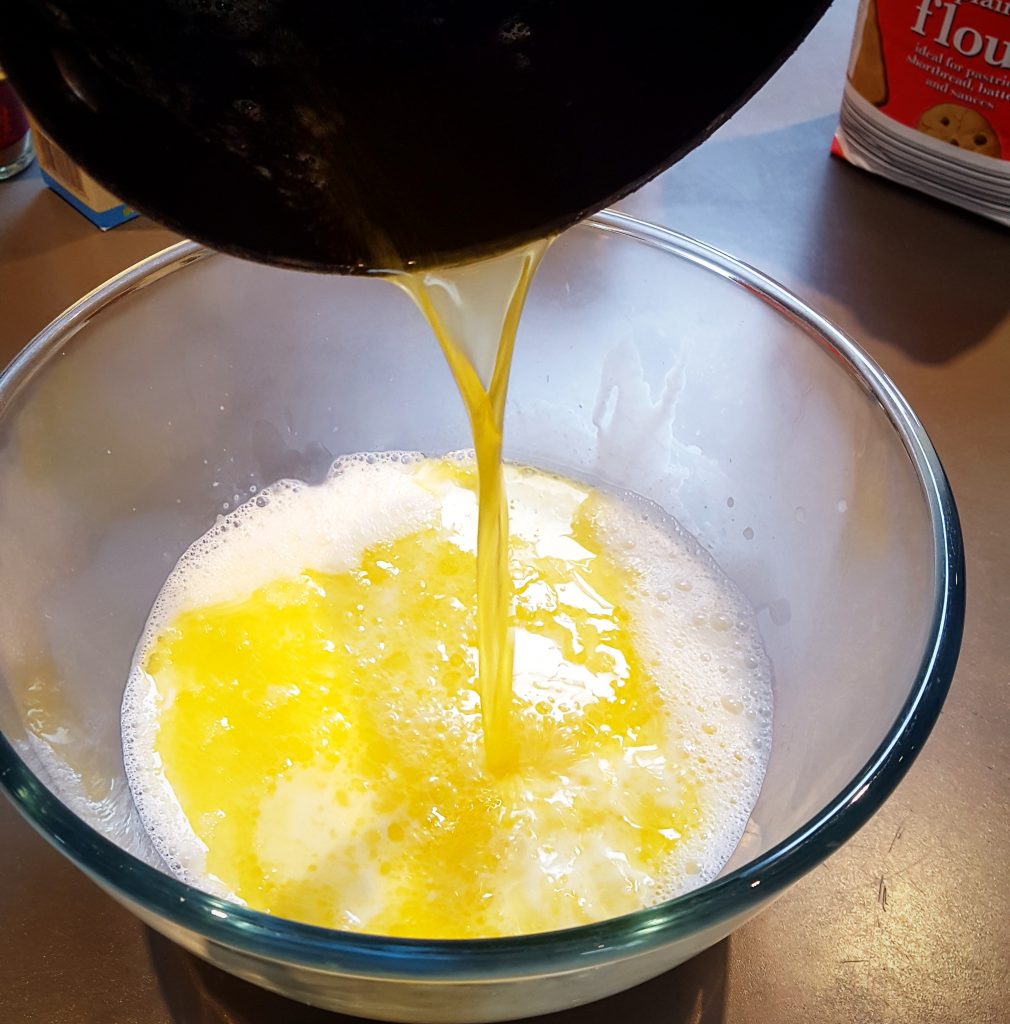 Sprinkle the yeast evenly over the warm mixture and let set for 1 minute. Then add 445g/4 cups of the flour to the milk mixture and mix with a wooden spoon until just combined.

Cover the bowl with a towel or plastic wrap and set in a warm place to rise for 1 hour.

Preheat oven to 350˚F/180˚C/ 160˚C fan. Once its at the correct temperature, place the whole pecans onto a baking tray and pop in the oven for about 15 minutes. Once removed from the oven, chop into small pieces. After 1 hour, the dough should have nearly doubled in size.

Remove the towel and add an additional ¾ cup of flour, the baking powder, and salt. Stir well, then turn out onto a well-floured surface. 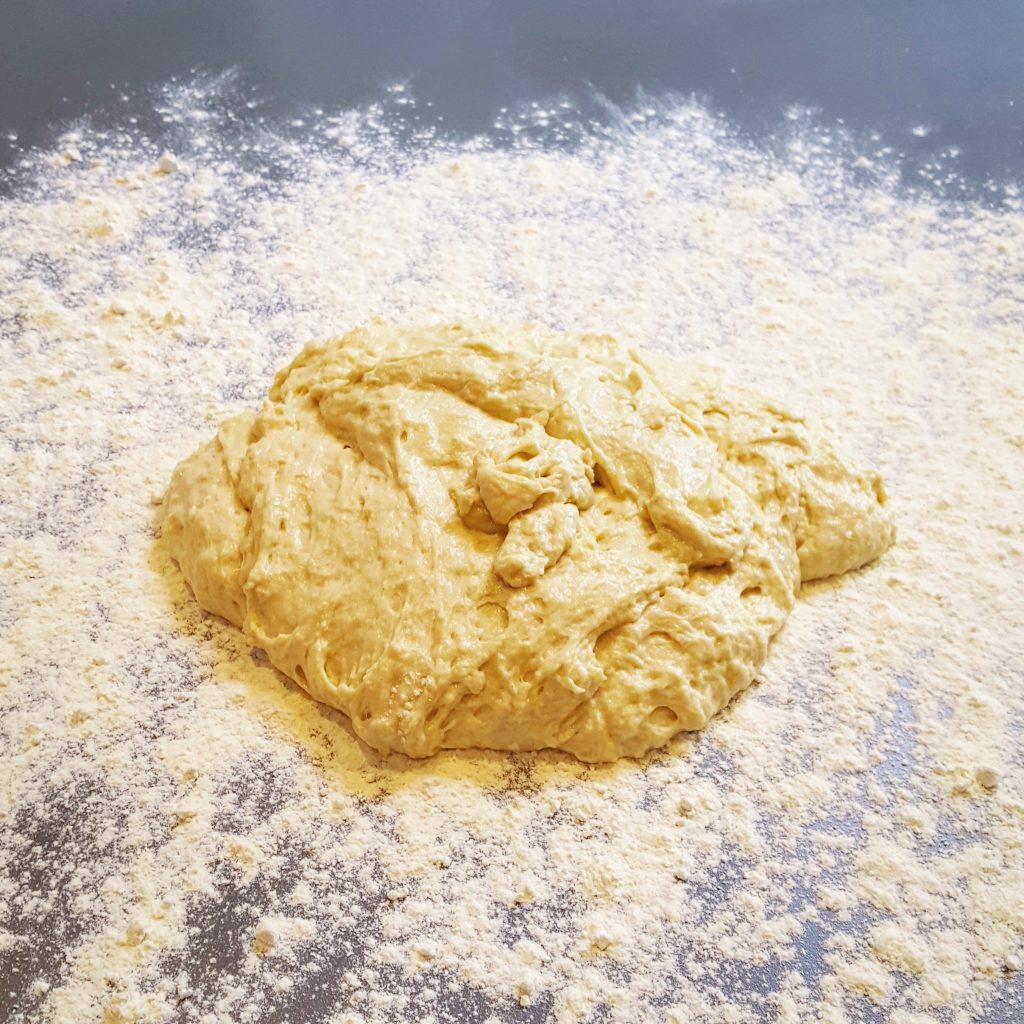 Knead the dough lightly, adding additional flour as necessary, until the dough just loses its stickiness and does not stick to the surface. 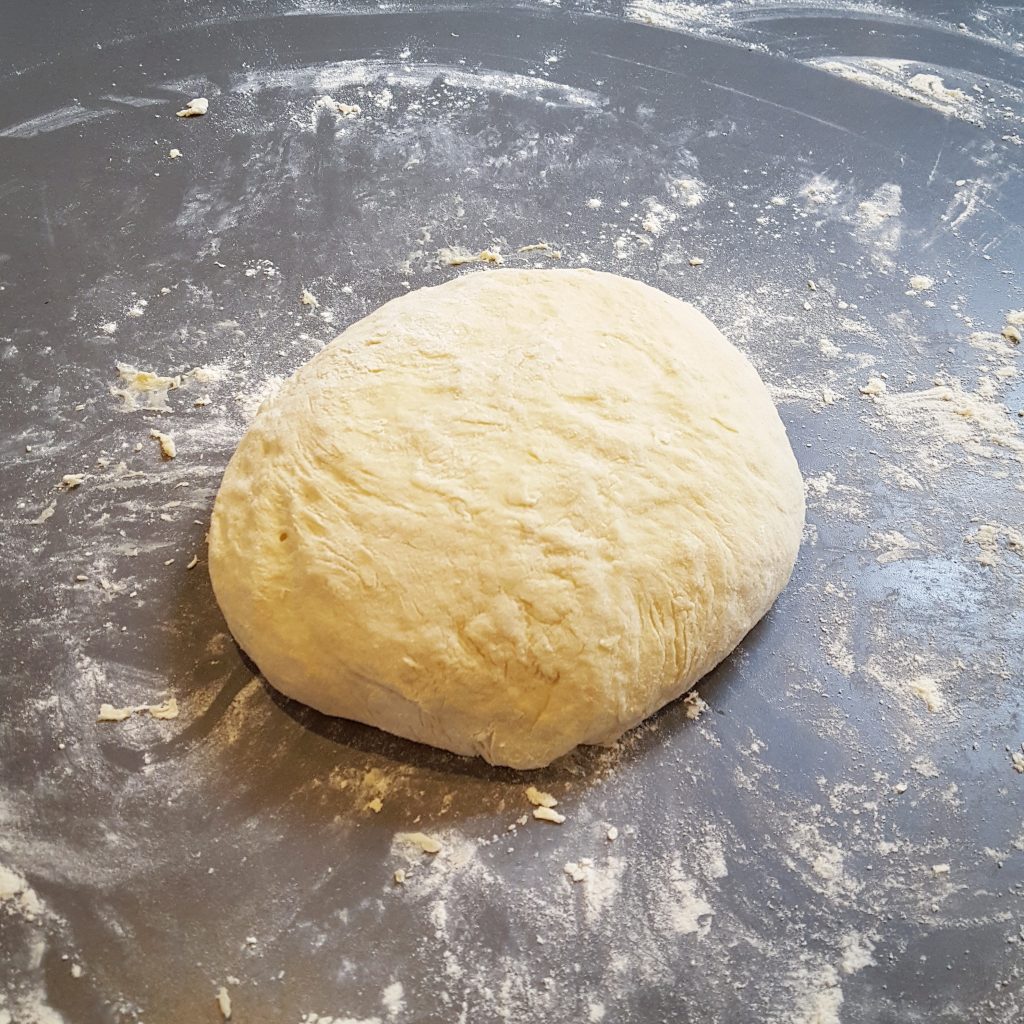 Roll the dough out into a large rectangle, about ½-inch thick. Ideally the corners should be sharp and even, but that isn’t easy so do the best you can! 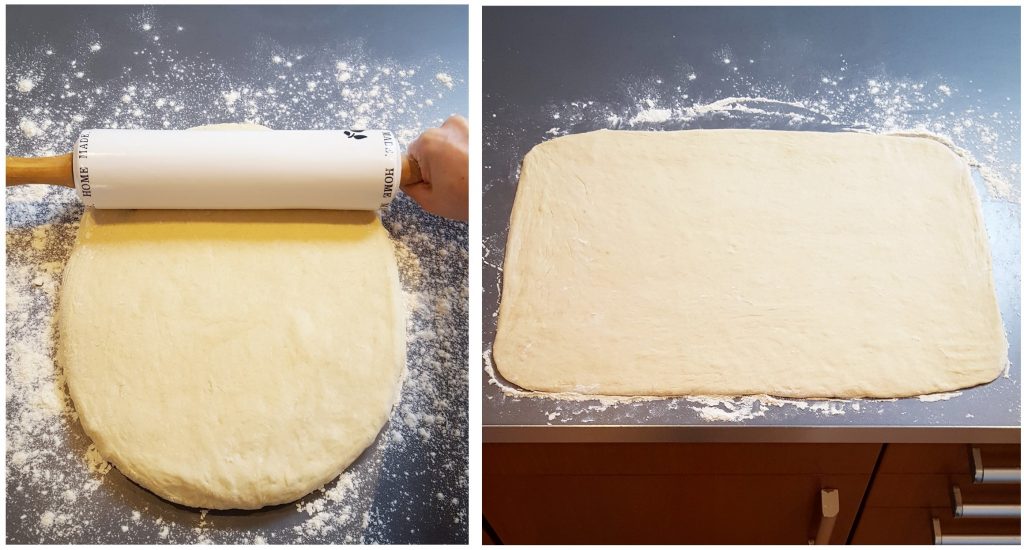 Spread the softened butter evenly over the dough. I started with a spatula but even though the butter was soft, it was still pulling on the dough, so I found it easier to do it with my fingers. But just do whatever works best for you. 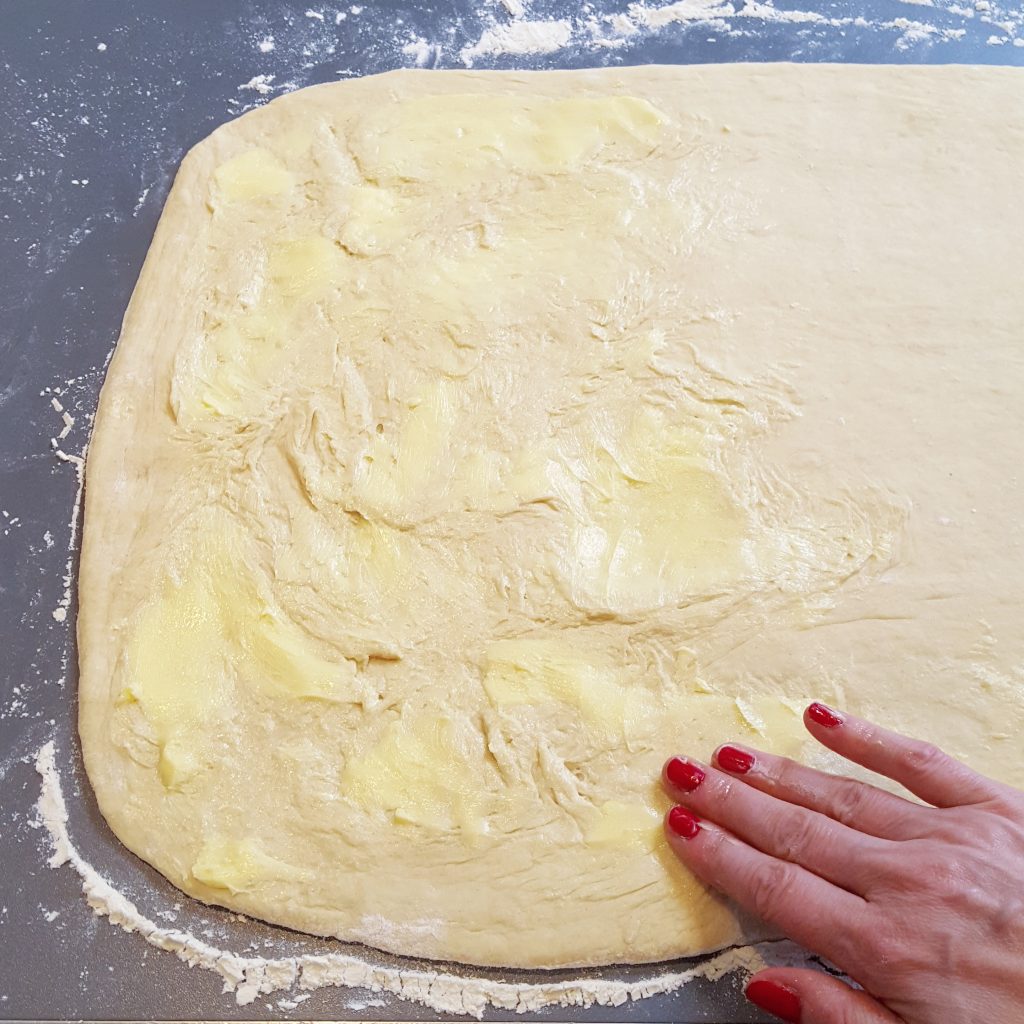 Sprinkle the dough evenly with brown sugar, a generous sprinkling of cinnamon and the toasted pecans, if you want to add them. Then gently press the mixture into the butter. 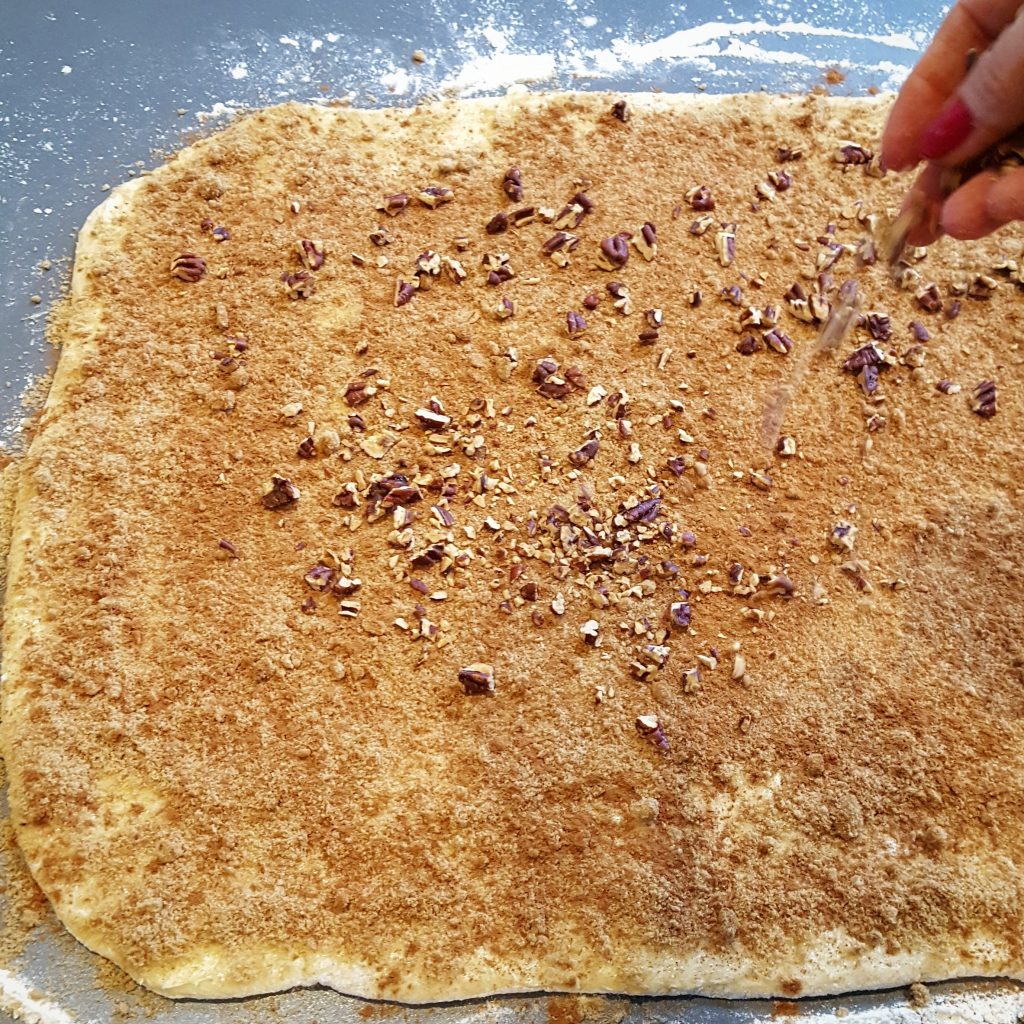 Roll up the dough, forming a log, and pinch the seam closed. Place seam-side down. Trim off any unevenness on either end. 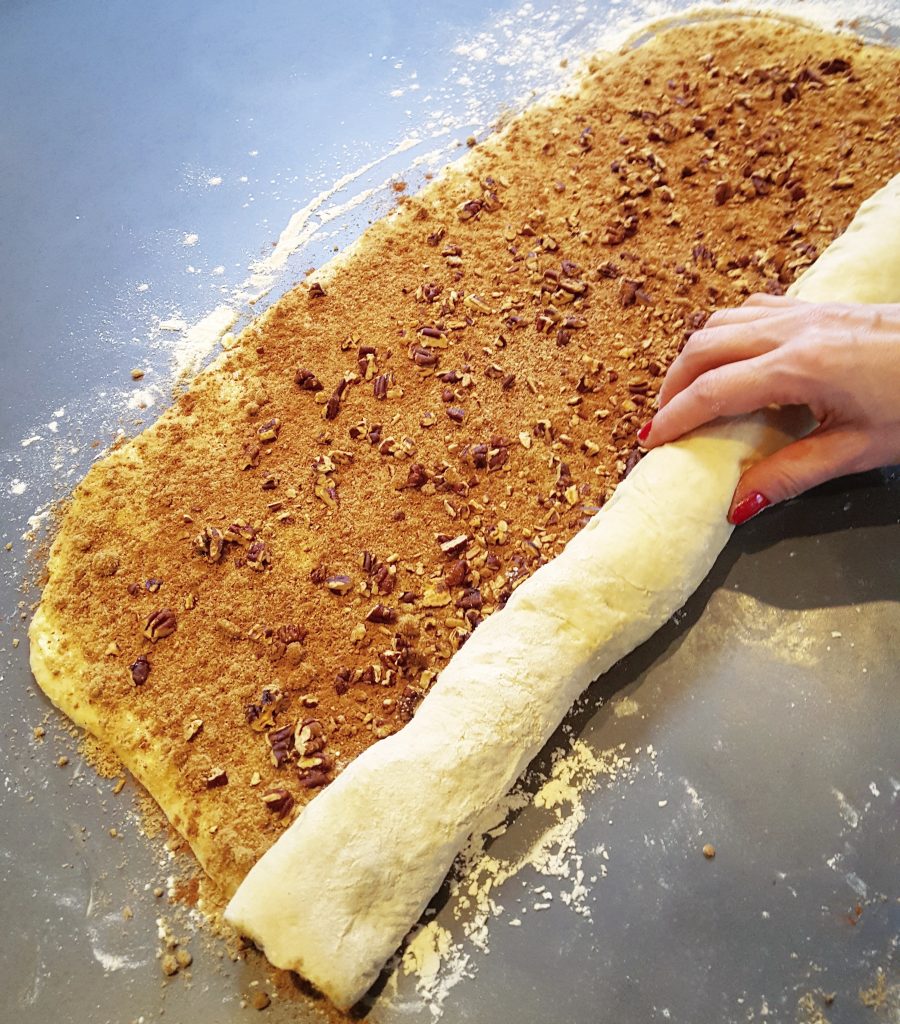 Cut the log in half, then divide each half into 7 evenly sized pieces (about 1½ inches thick each). Place 7 cinnamon rolls in each cake pan, one in the center, six around the sides. (As you can see below, mine ended up with 8 in one tin and 9 in another, just so what works for you). 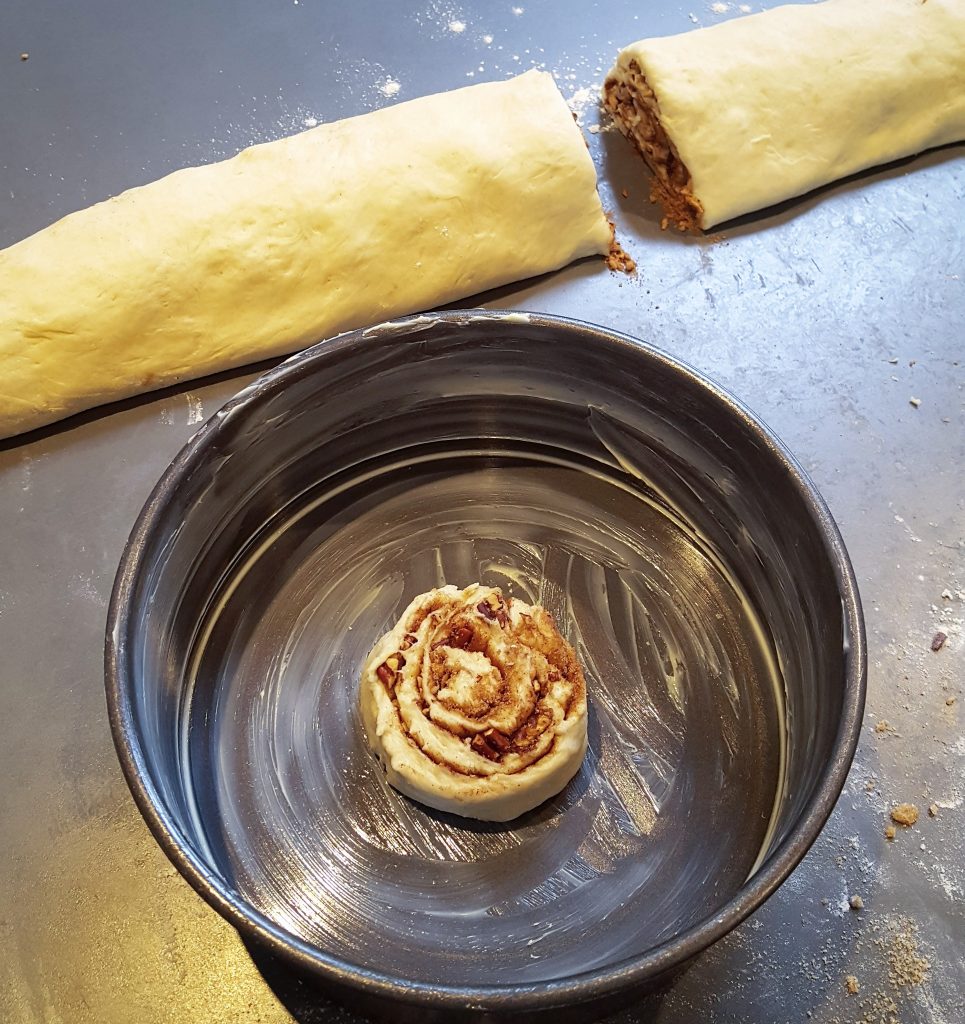 Cover with cling film/plastic wrap and place in a warm place to rise for 30 minutes. 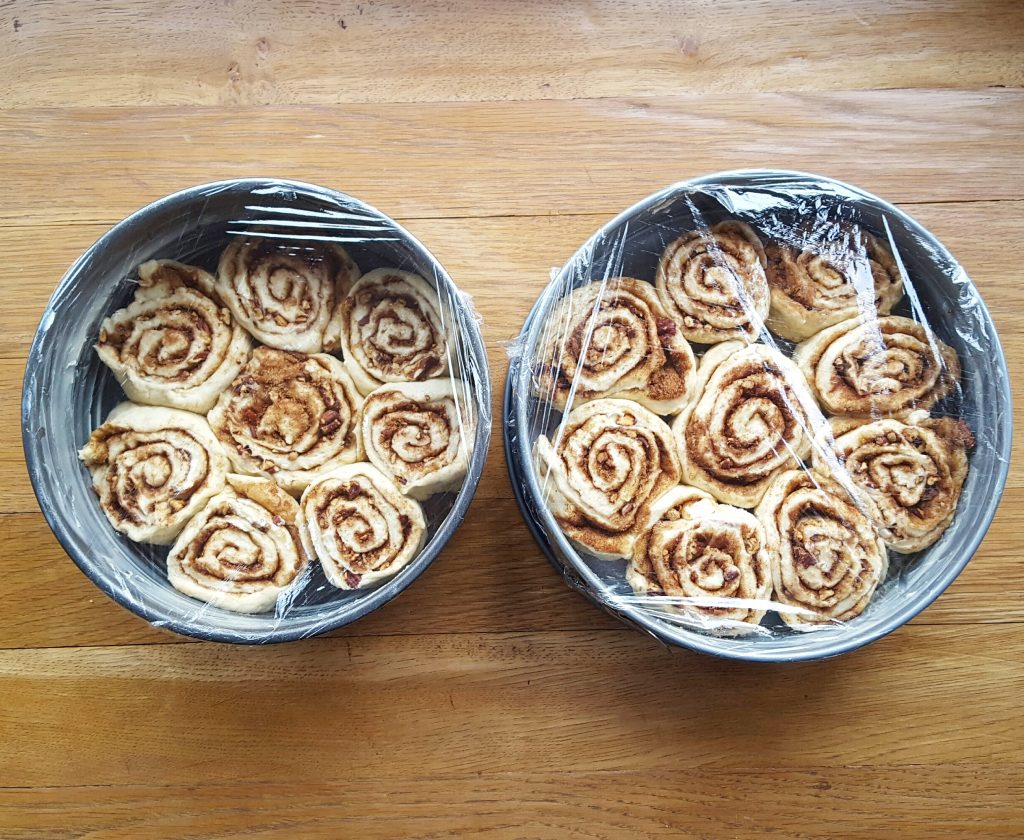 Remove the cling film and you’ll notice the buns have filled the space in the baking tins. 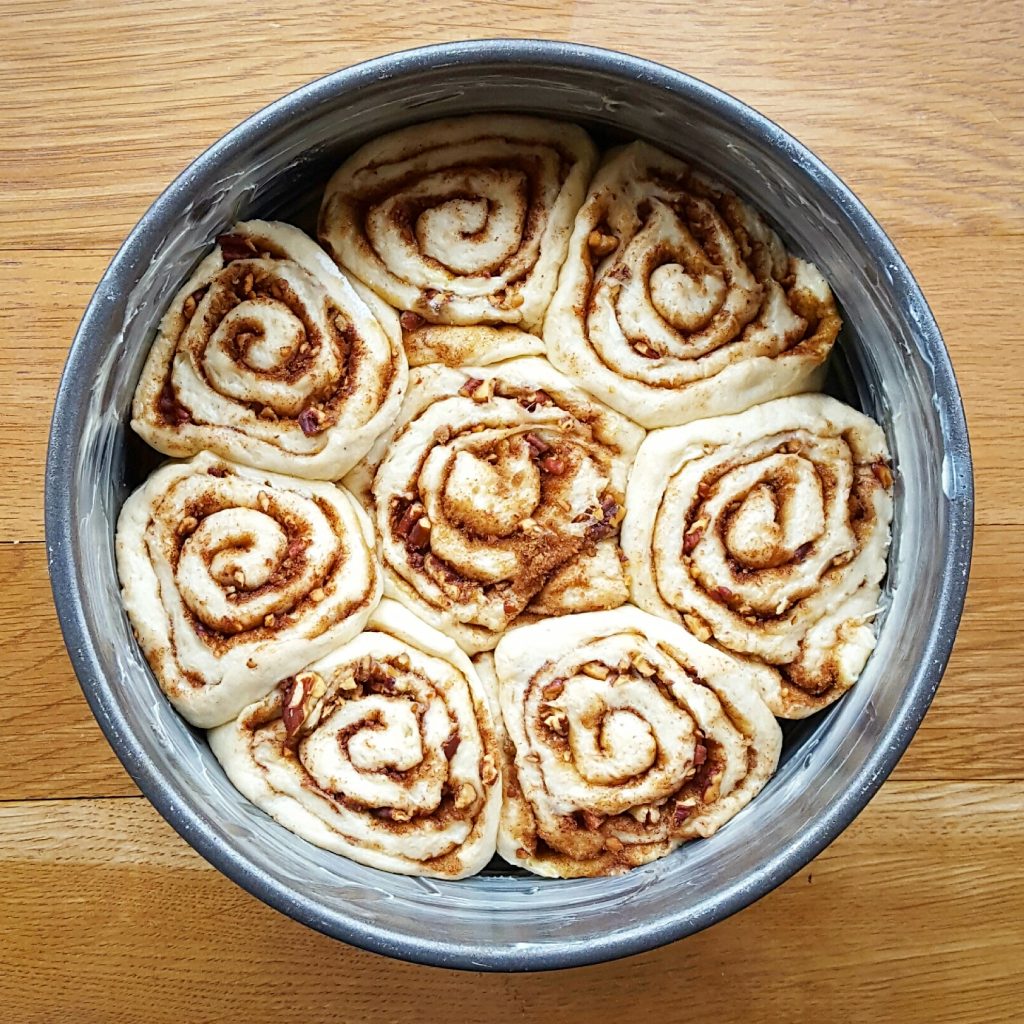 Bake the cinnamon rolls in a preheated oven for 25-30 minutes, until golden brown. 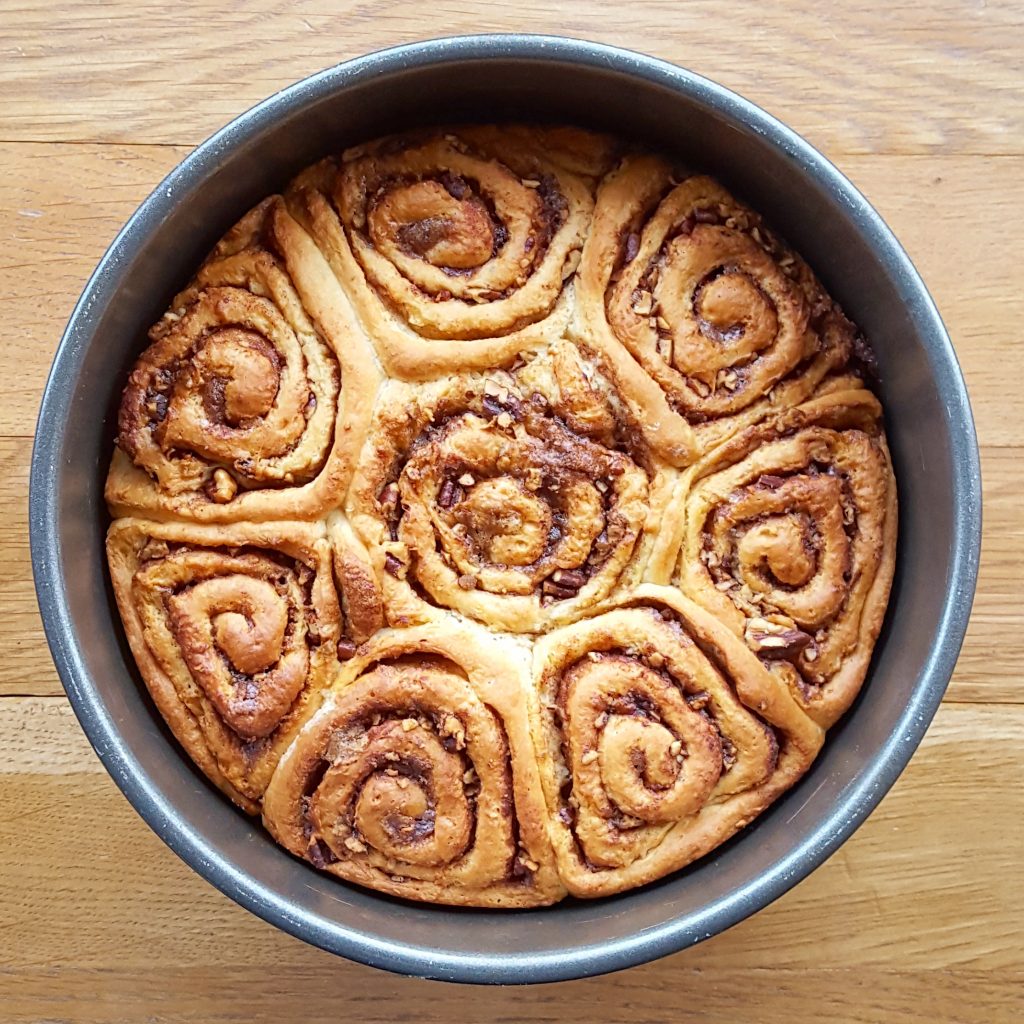 While the cinnamon rolls are baking, prepare the frosting. In a medium-size mixing bowl, whisk together cream cheese, butter, vanilla, whole milk, and icing sugar, until smooth. 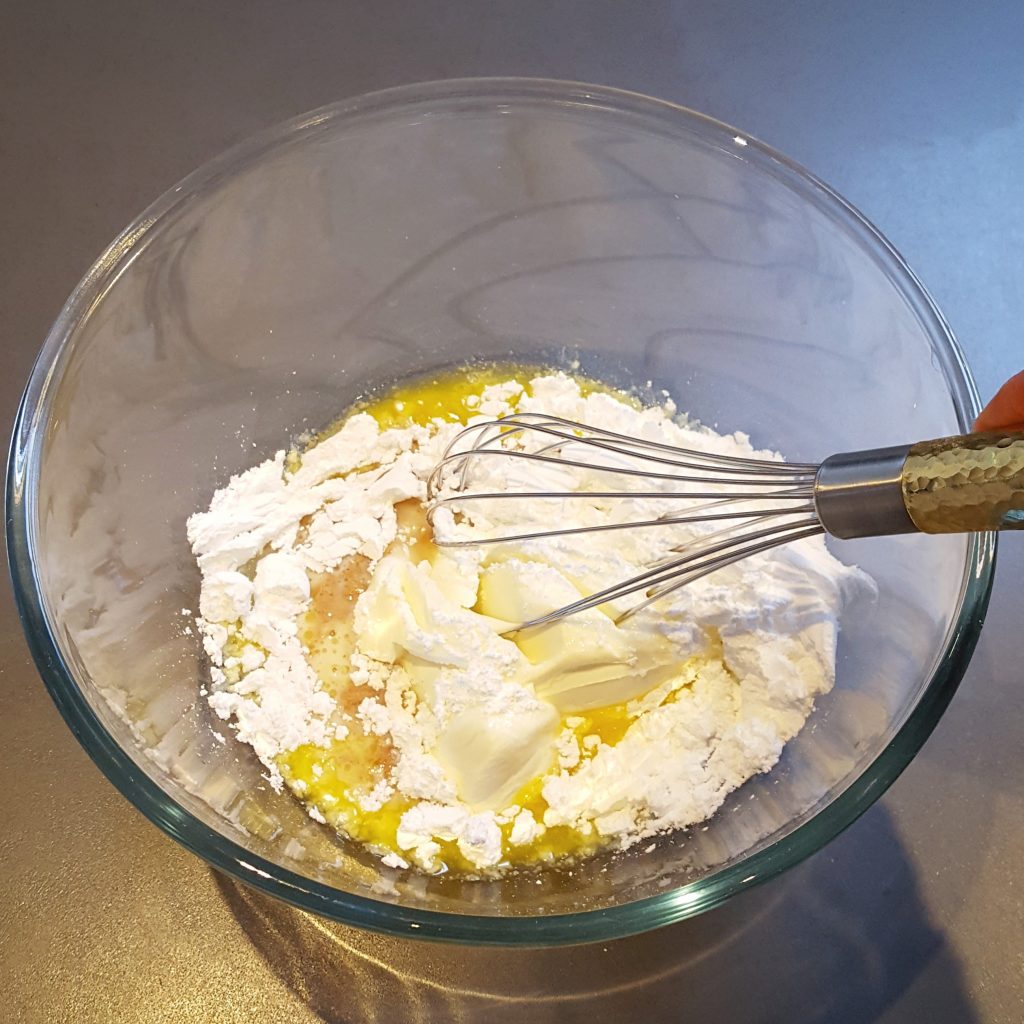 Remove the cinnamon buns from the oven. While still warm, slather evenly with the cream cheese frosting. 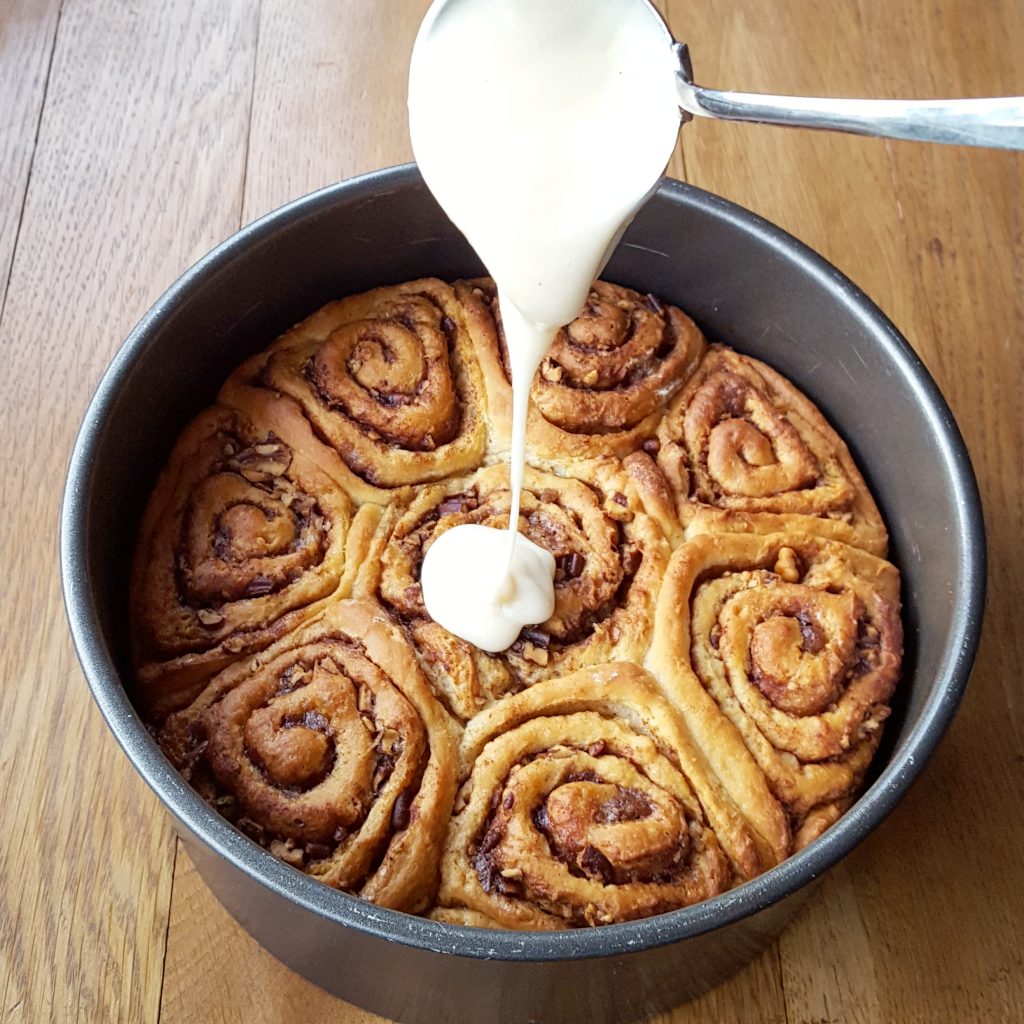 In my opinion you can never have too much cream cheese frosting. Even when you think you have enough, add a bit more. The buns suck it all up. 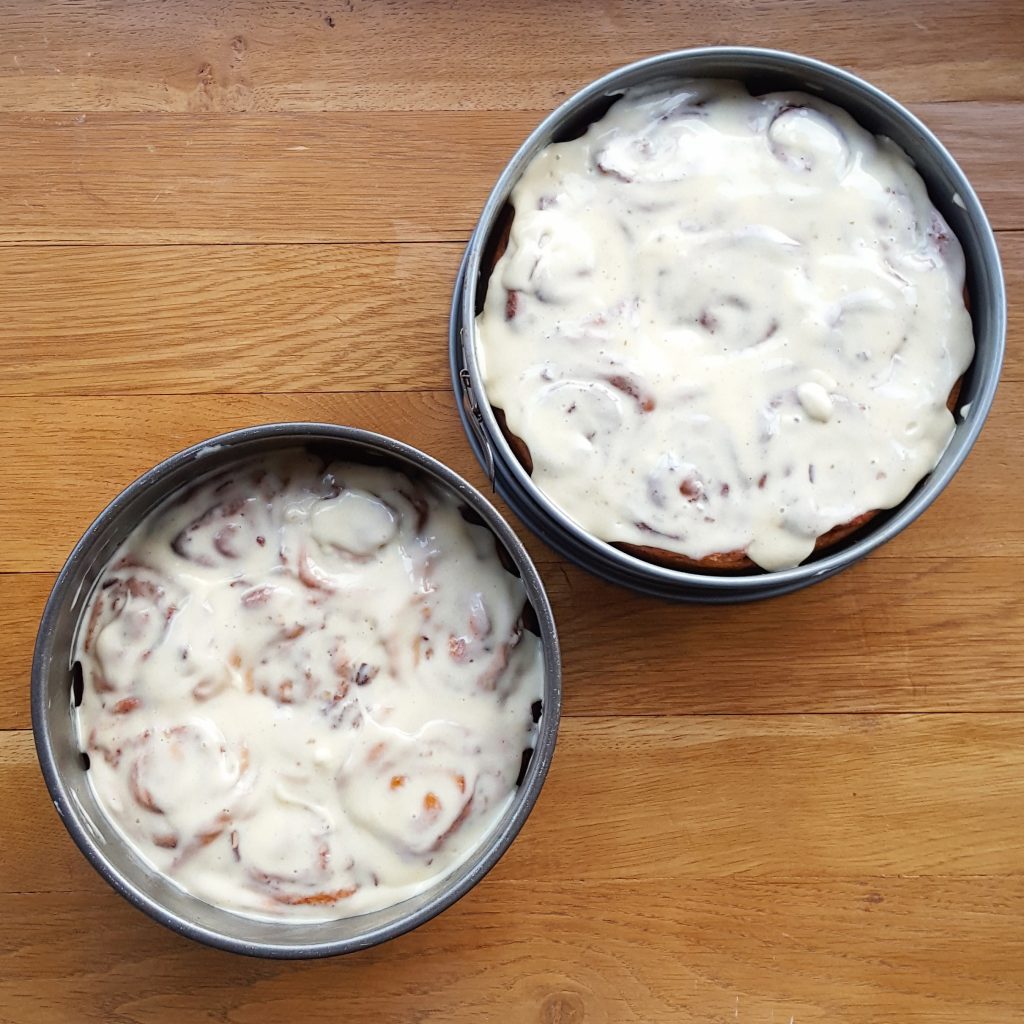 These really are so delicious. They’re best eaten when still warm from the oven, however they do keep for a couple of days. Personally, if eating them the day after making them, I like to make a little extra frosting and spoon extra on after the buns have sucked it up from the day before. 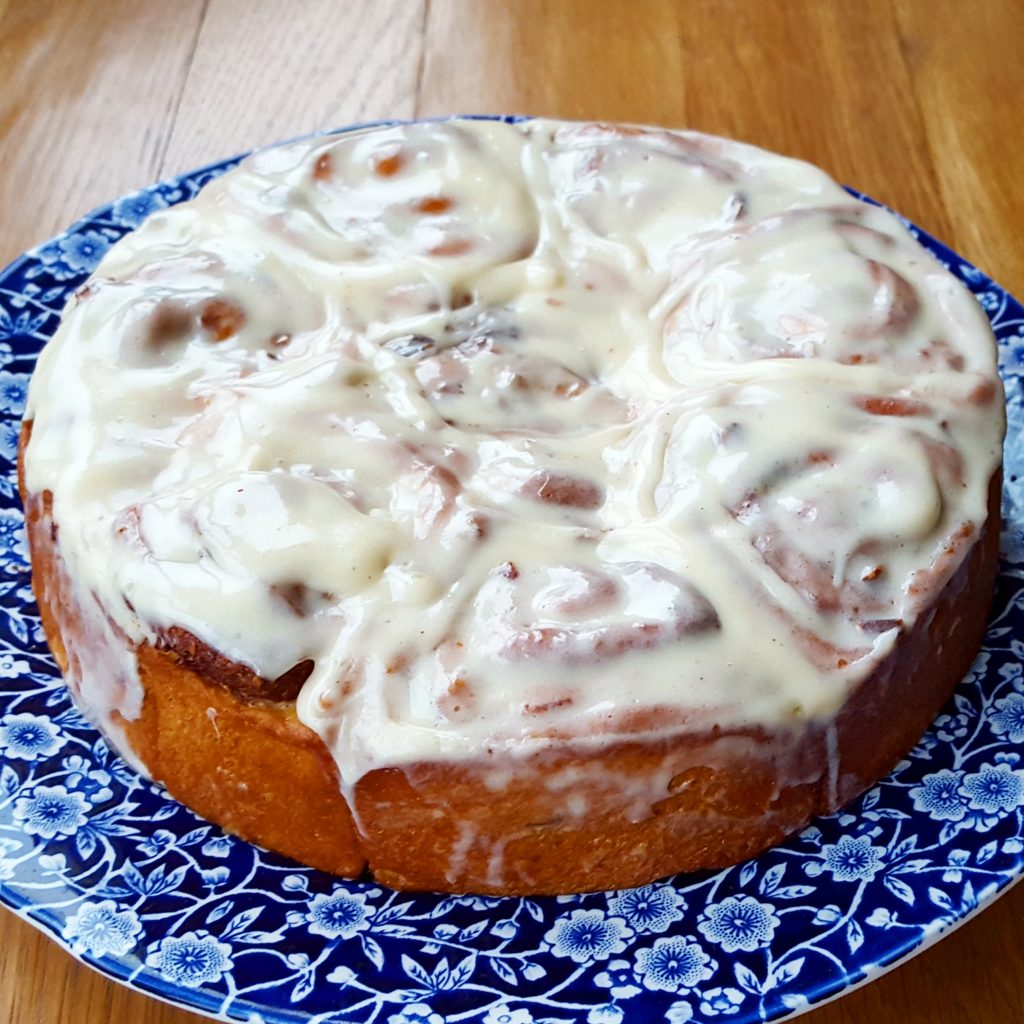