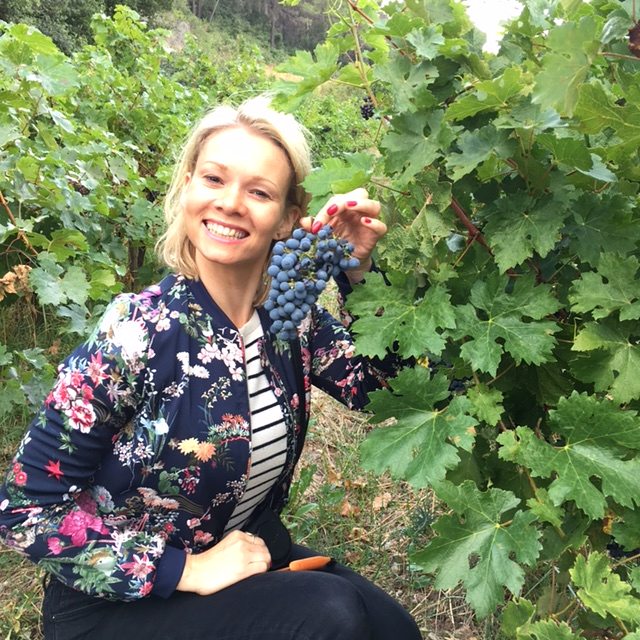 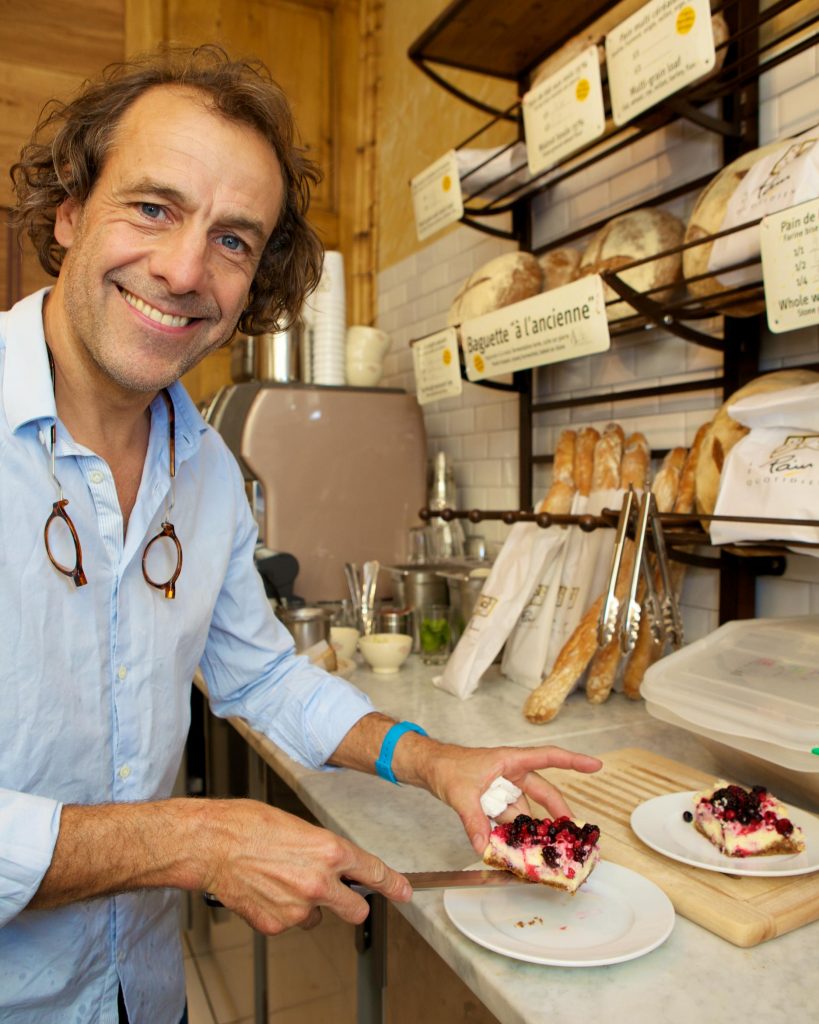 I was lucky enough to be invited to Montpellier recently, to visit the home of Alain Coumont, founder of Le Pain Quotidien, an opportunity I could not pass up. If you’re not familiar with Le Pain Quotidien, let me fill you in….it is a restaurant and boulangerie chain known for its communal tables, freshly baked bread, organic and locally sourced ingredients and simple but elegant dishes.

Founded by former chef Alain Coumont in Belgium 26 years ago, there are now 269 outlets across 20 countries, including America, UAE, India and Japan to name a few. Le Pain Quotidien means ‘the daily bread’ and was born from Alain’s frustration at the lack of good bread in his native Brussels. 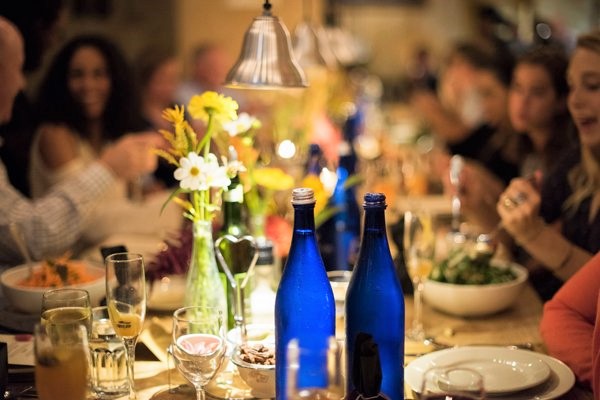 I was soon on my way to the Languedoc-Roussillon region of France to learn more about his passion for simple food, local produce and to find out where it all began.

On arrival, I find Alain – having just flown in from New York – busy inside a restored street food van, preparing the most wonderful homemade pizzas, cooked in a wood fired oven. 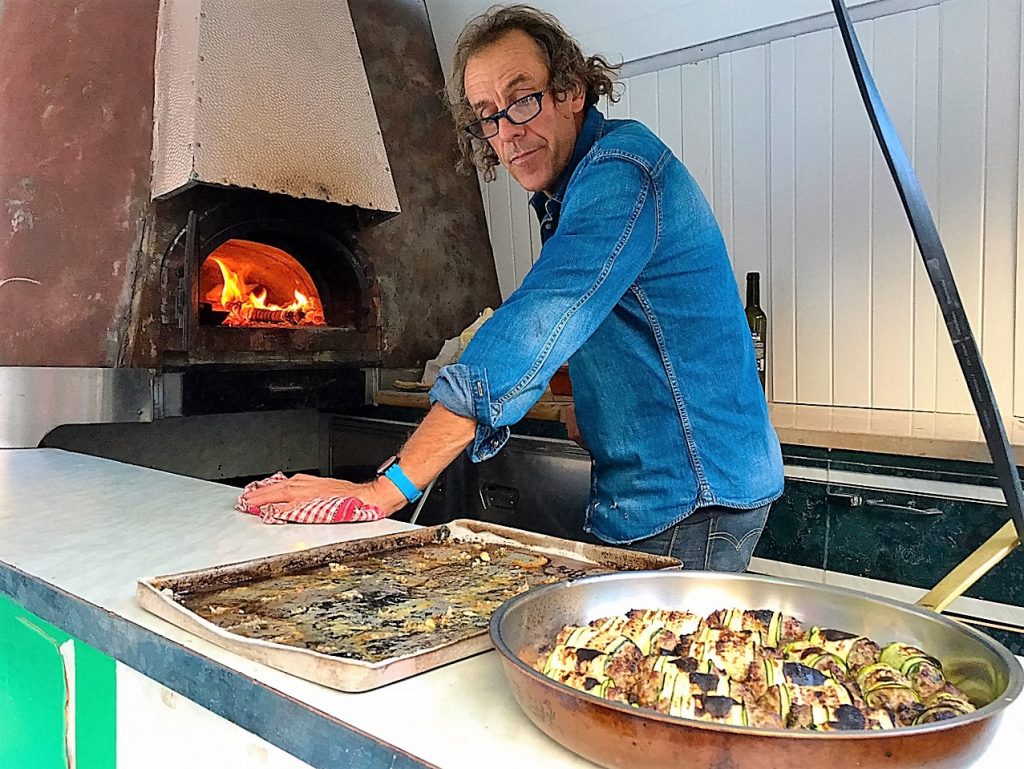 Cheeses, chutney, salad, cured meats, bread and his homemade organic wine were laid out on the side…I was in heaven! 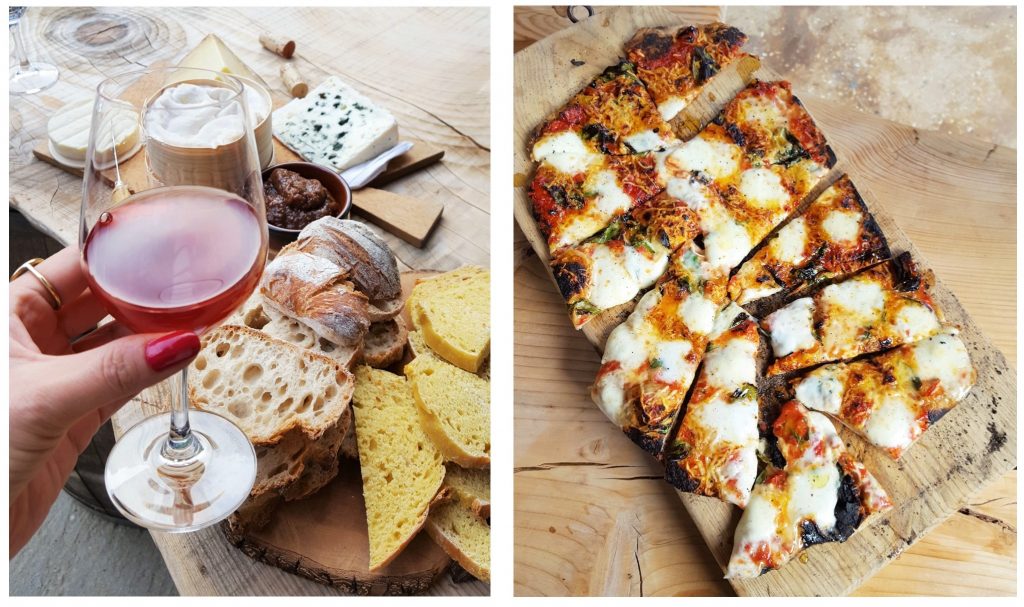 The setting was incredible…his house and its grounds are simply breathtaking. After filling up on cheese and pizza, I got the chance to do some grape picking in Alain’s very own vinyard. There is something very serene and therapeutic about being out in the fresh, clean country air, with the sky turning pink above and peaceful silence all around. I could certainly get used to that. However, there was such an abundance of grapes, it was a long process. No matter how many baskets were filled, the bunches of grapes didn’t seem to diminish! 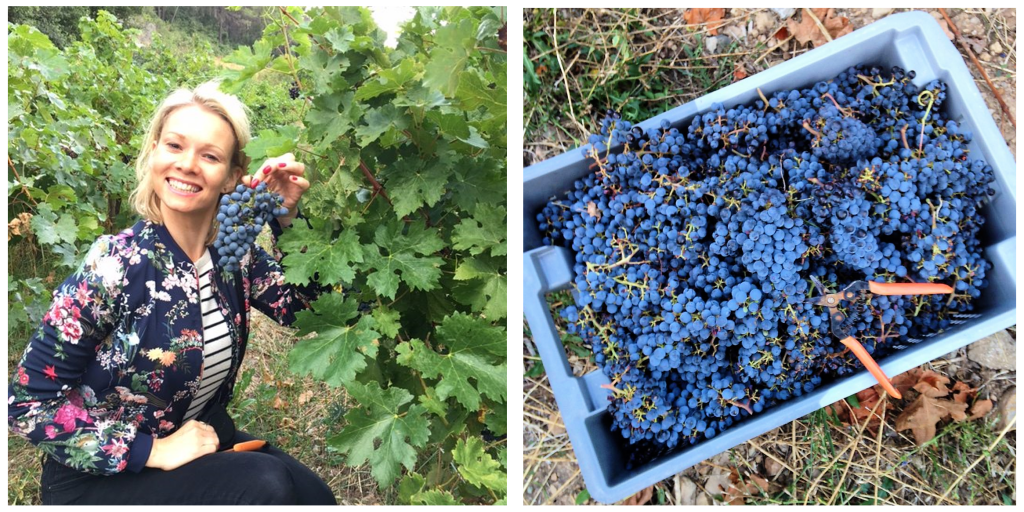 Grape picking was followed by the chance to sample the wine at different stages of fermentation…from sharp & cloudy to sweet, building up to the finished product…a beautifully crisp, dry white organic and biodynamic wine, which is actually served as the house wine in Le Pain Quotidien stores.

Later that evening, dinner was served in the most envy-inducing dining room, which allowed a peek into the kitchen of dreams! 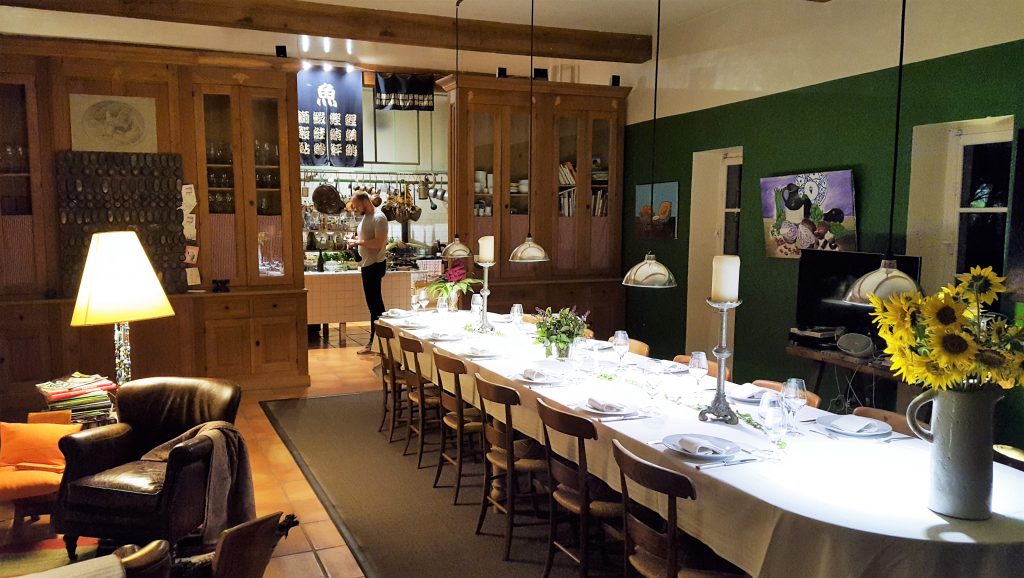 A myriad of pots and pans hanging over a central island, vases and jugs adorning shelves, antique scales, a meat slicer and bowls overflowing with fresh vegetables…it was glorious! Alain was beavering away, creating a tremendous feast using his local, seasonal produce. 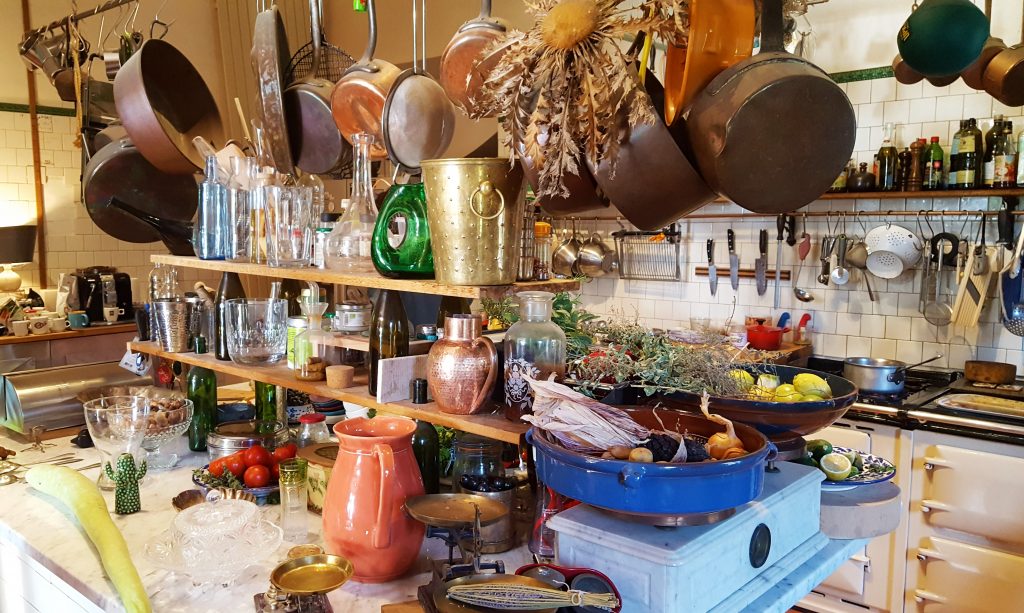 Foie gras and candied quince served with einkorn bread kicked off the evening’s festivities. (Einkorn is an ancient grain that’s been making a comeback in recent years due to it’s nutritional value. Its a particular passion of Alains and he will be introducing it into Le Pain Quotidien stores, starting with his Paris branches from January.)

Next up was a wonderfully fresh and zesty prawn ceviche served with tomato & coriander salsa and avocado, followed by delicious slow cooked lamb kofte wrapped in slices of aubergine and courgette served with spiced beluga lentils, tzaziki and a tomato and mint sauce. Dessert was utterly divine…figs roasted in honey and lavender and the best homemade vanilla ice cream I’ve ever tasted. The sheer quality of the produce shone through and proved that dishes don’t need to be complicated to taste incredible. 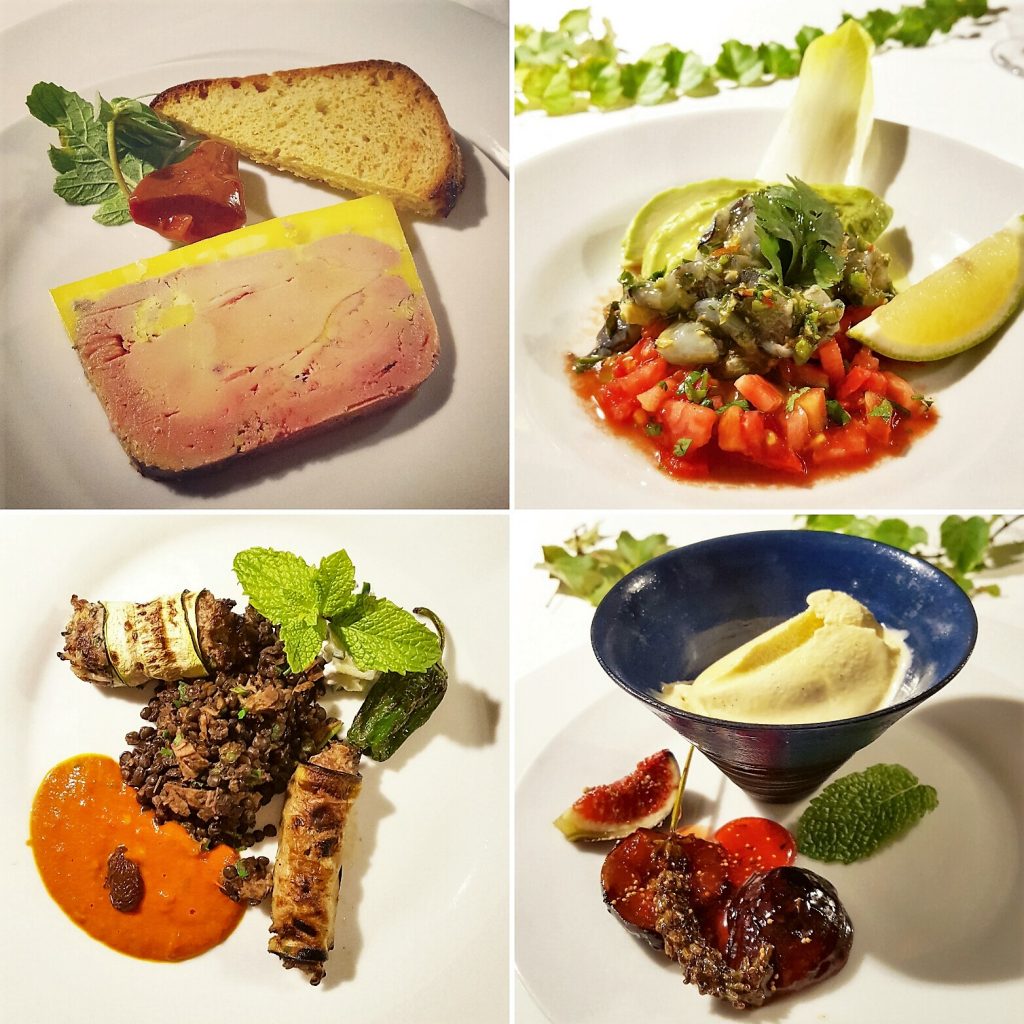 Waking up the next morning with the sun bursting into my bedroom and the sound of roosters crowing, I wandered outside to this little piece of heaven…

Breakfast was typically French…homemade jams, crusty bread, a variety of cheeses and leftover foie gras from the night before, all served with coffee and orange juice. Utter bliss.

After breakfast, Alain explained that he grew up above the grocery store his parents had inherited. He loved baking bread, especially pure sourdough, and he soon rented a small shop in Brussels, selling his sourdough through the window. He found a communal table in a local flea market and managed to get his hands on a coffee machine. With the help of a newspaper article about Alain’s new venture, the bread started selling “like crazy” and customers filled his little store, even sitting on the radiator when they ran out of chairs. Le Pain Quotidien was born and Alain’s passion for traditional baking techniques and organic, seasonal produce, as well as his love for communal tables can be seen in his stores around the world.

As food trends change, there is a very clear shift away from gluten at present. Alain believes there is a need to educate people in the differences between good gluten and bad gluten and is keen to bring back ancient grains, such as einkorn bread, and encourage people to live a healthy, balanced lifestyle. He explains that wheat has been developed over the years to have very strong gluten as it helps mass-produced bread keep its quality consistent. Unfortunately, this affects 1% of the population, with many more citing side effects from eating it. Ancient wheat is high in protein but it doesn’t translate to gluten. Its also very high in micronutrients. It’s harder to bake with but a lot better for your health. Alain is planning to start selling his ancient wheat loaves in his Paris stores next year.

Another project of his is Le Bontaniste, a 100% plant-based, 99% organic food & natural wine bar on the Upper West Side, New York and Ghent, Belgium. Its vegan and gluten free too…the clean eating brigade will love it!  A second branch in New York is already in the pipeline.

In the UK, LPQ have finally branched out of London, opening in Leeds a couple of weeks ago. Hopefully there will be more opening around the country in the near future.

LPQ stores also host a number of baking masterclasses so you can learn how to bake the Le Pain Quotidien way. Their pastry chefs will guide you through the baking process, from mixing the perfect dough to kneading, shaping and baking. More details can be found here.

Not even Alain could have forseen the success of Le Pain Quotidean when he started selling sourdough 26 years ago in that tiny shop in Brussels. But it just goes to show you that with love, passion and a clear focus, you can achieve anything.