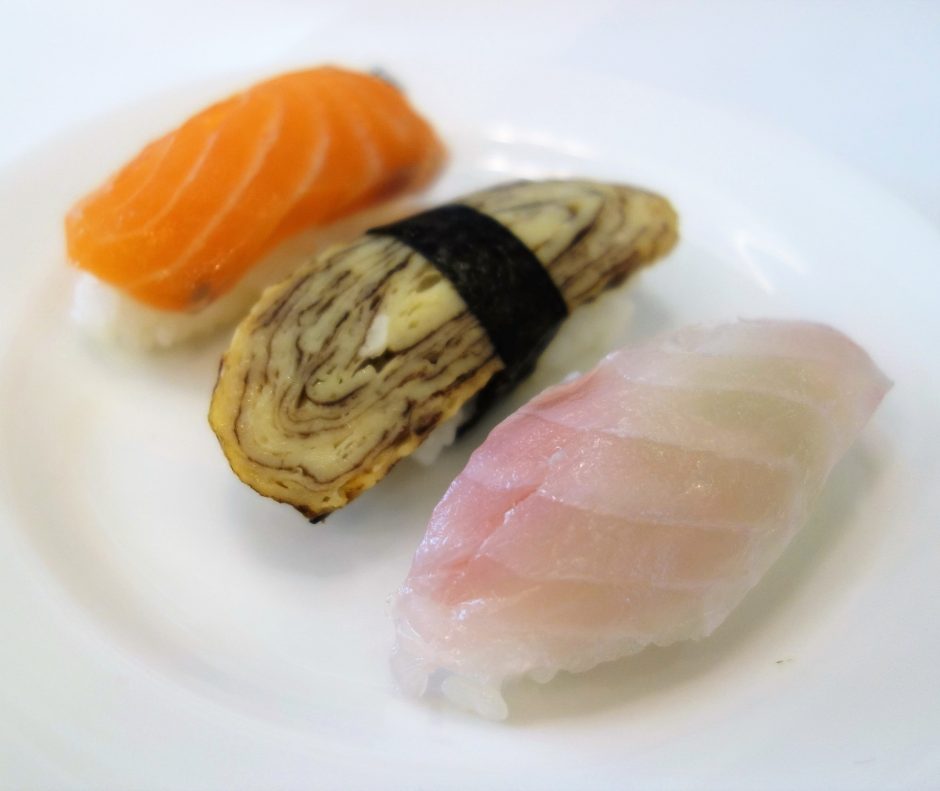 A couple of weekends ago, I had the pleasure of spending a wonderful afternoon learning how to make sushi. I’ve dabbled in a bit of sushi making at home with friends, but it has never turned out particularly well. So when I got the opportunity to attend Reiko Hashimoto‘s sushi masterclass at The Ivy, how could I possibly say no?

The class took place in the upstairs loft lounge space in The Ivy’s beautiful private members club, The Club at The Ivy, which actually used to be a sushi restaurant. On arrival I was offered a glass of champagne and once everyone was accounted for, Reiko introduced herself then invited us all to take a seat. 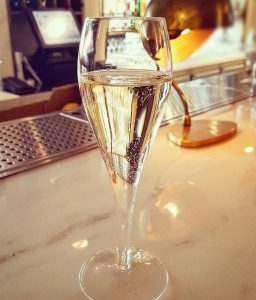 Reiko began by talking us through the ins and outs of sushi rice. She explained that sushi has to be made with short grain rice, but stressed that although it looks like risotto rice, the two are definitely not the same. Start by rinsing the rice a few times until the water is clear, then soak it in equal quantities of cold water for at least half an hour, preferably longer. Once that’s done, start cooking it over a high heat and once its reached boiling point, turn down to a simmer for 15 minutes, never opening the lid. After 15 minutes turn the heat off and leave the rice with the lid on for 15-20 minutes.

She then explained that the seasoning needs to be added to the rice when it is still warm, never let it cool before doing this. The seasoning she used is ½ cup rice vinegar, ¼ cup sugar, ½ tsp salt, ½ tsp concentrated dashi stock or powdered dashi stock simmered gently in a pan over a medium heat for about 5 minutes until slightly thickened.  (This is for 3 cups of sushi rice which has been cooked in 3¼ cups water).

We also learned that you need the correct instruments to make good sushi rice.  In particular, a Hangiri Wooden Sushi rice Bowl, a wooden spoon and a fan.  The Hangiri bowl is especially important as it absorbs excess moisture. Stainless steel or ceramic bowls cannot do this. Hangiris have large, flat bases allowing the cooked rice to be spread out evenly in order to release steam and cool down to the right temperature for rolling. Reiko used a wooden paddle to stir and fold the seasoned sushi whilst fanning it to cool it down. 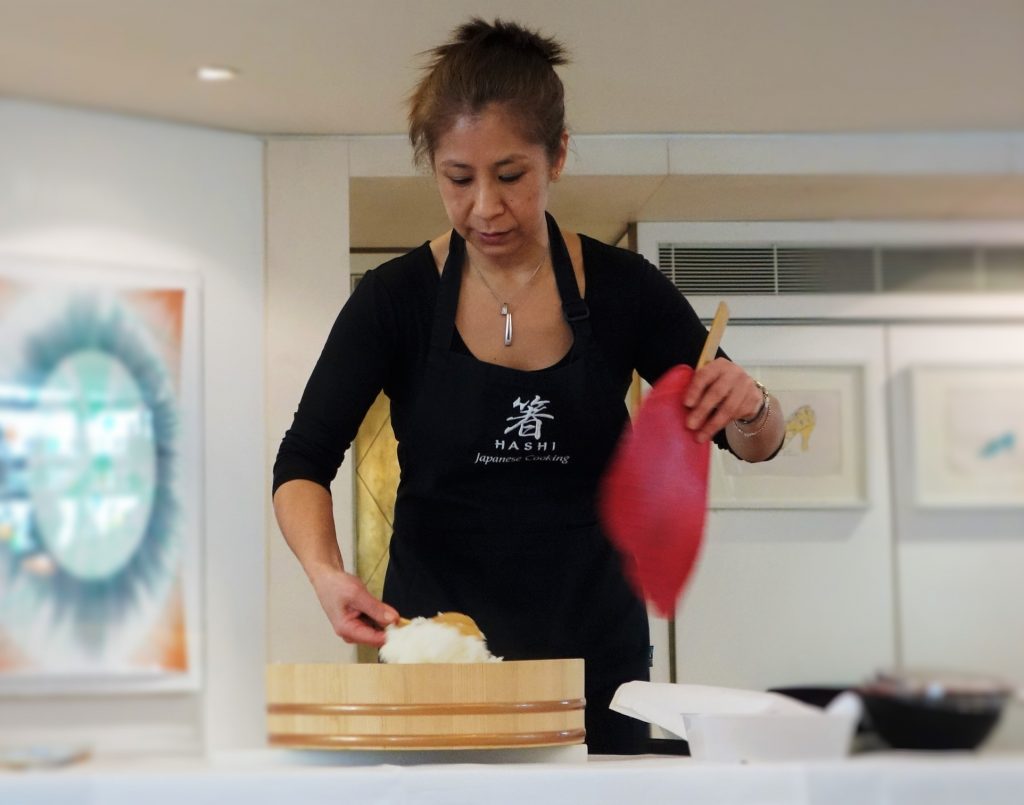 Next, she showed us how to make tamagoyaki, a Japanese sweet omelette roll, often used in nigiri. Using a special rectangular frying pan, she poured in about 15% of her egg mixture (4 beaten eggs, 1 tsp of dashi powder, 1½ tbsp mirin, 2 tsp caster sugar, ½ tsp soy sauce, pinch of salt) then tilted the pan to coat it evenly. When the mixture began to set, she rolled it up towards her with chopsticks, making sure to roll it while the surface of the egg was still wet (otherwise the layers won’t stick). 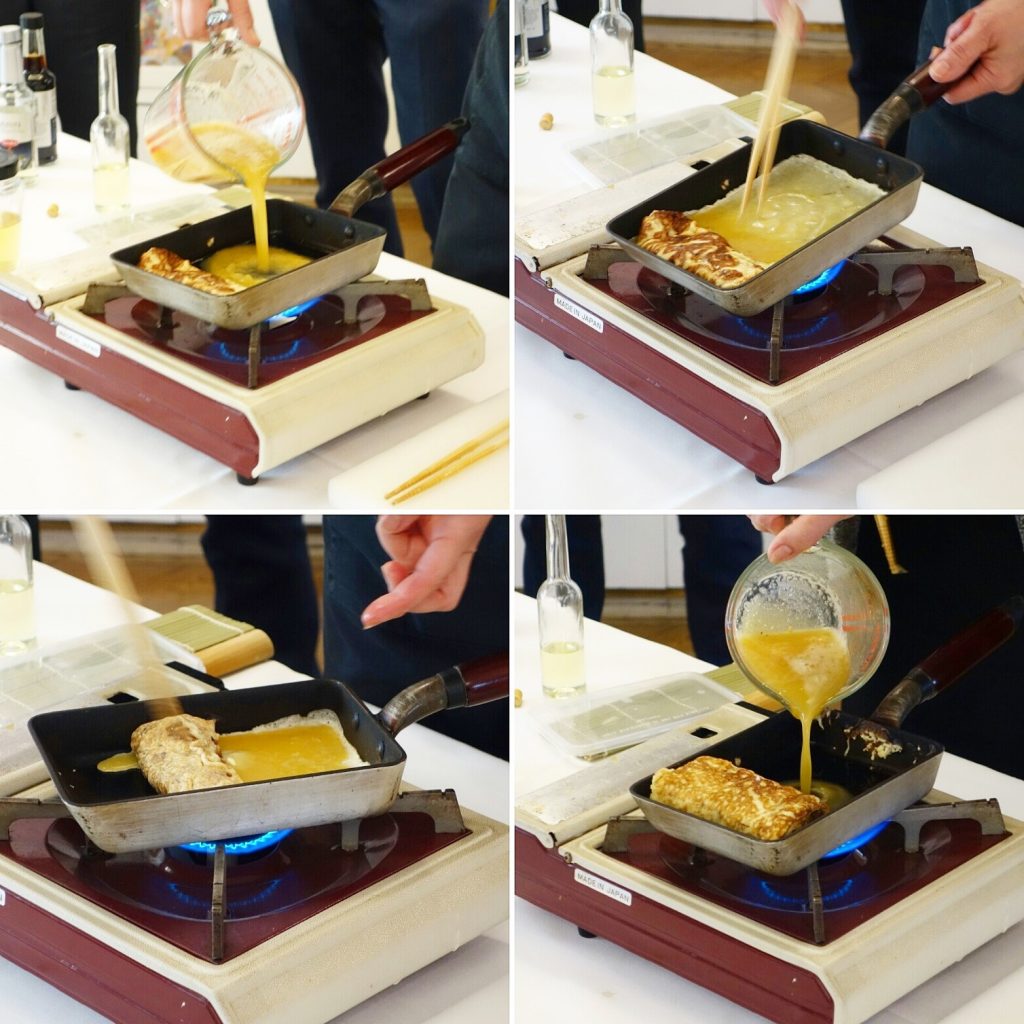 Keeping the rolled omelette in the pan, she pushed it back to the furthest side of the pan, greased the empty part of the pan again and poured another 10% of the egg mixture in at the empty side of the pan. She lifted the first roll with chopsticks and let the egg mixture run underneath. When it looked half set, she rolled the omelette around the first roll to make a single roll with many layers. Reiko repeated this until the egg mixture was used up, then once the omelette was fully and firmly rolled, she placed a plate on top of it to flatten the roll for about 10 minutes. Once set, she sliced the omelette into 5mm thick crossways to use for Nigiri.

Next, she demonstrated how to make the perfect sushi rolls. She evenly spread the sushi rice over a nori sheet, leaving a ½ inch in margin on the side furthest from her. Topped with a little wasabi paste, then she arranged the strips of fillings horizontally in a row across the centre of the rice. She held the sushi mat with both hands and carefully rolled it up, wrapping the fillings in the middle, then rolled it away from her. Once rolled, she held the sushi matt with both hands and squeezed gently to firm the roll.

Reiko then left the roll with the joining side bottom on the cutting board for at least 5 minutes so that the nori would glue naturally. (Nori will shrink slightly therefore it’s important to rest for a while before cutting.) 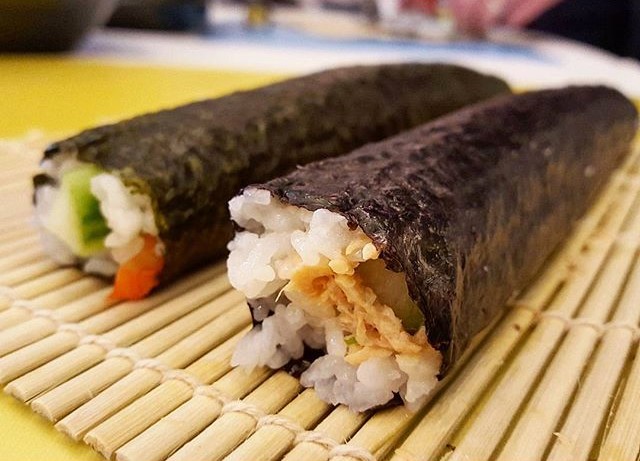 Once we had each rolled two rolls with the fillings of our choosing, Reiko demonstrated filleting a whole mackerel, and taught the class to roll the sushi rice into a nigiri base. Each person was then given two pieces of sashimi and one slice of tamagoyaki, (the Japanese omelette) at their workstation to create three nigiri…. 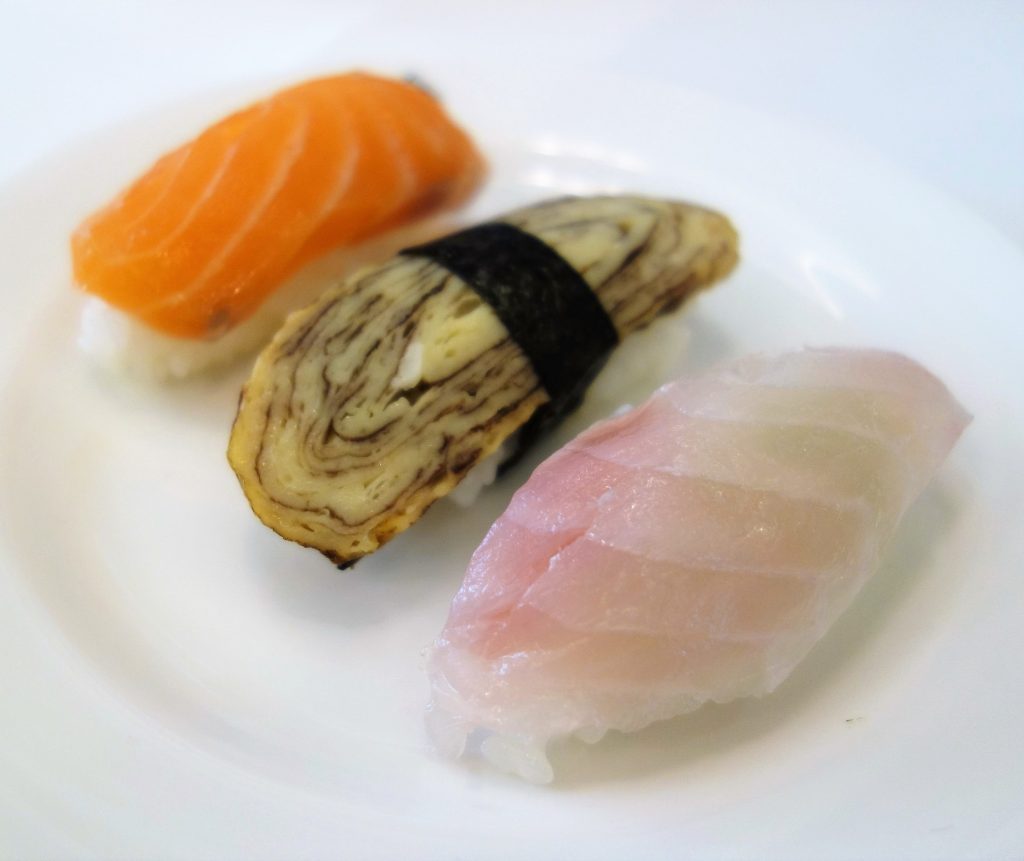 We were also shown how to make ‘inside-out’ rolls, also known as California rolls… 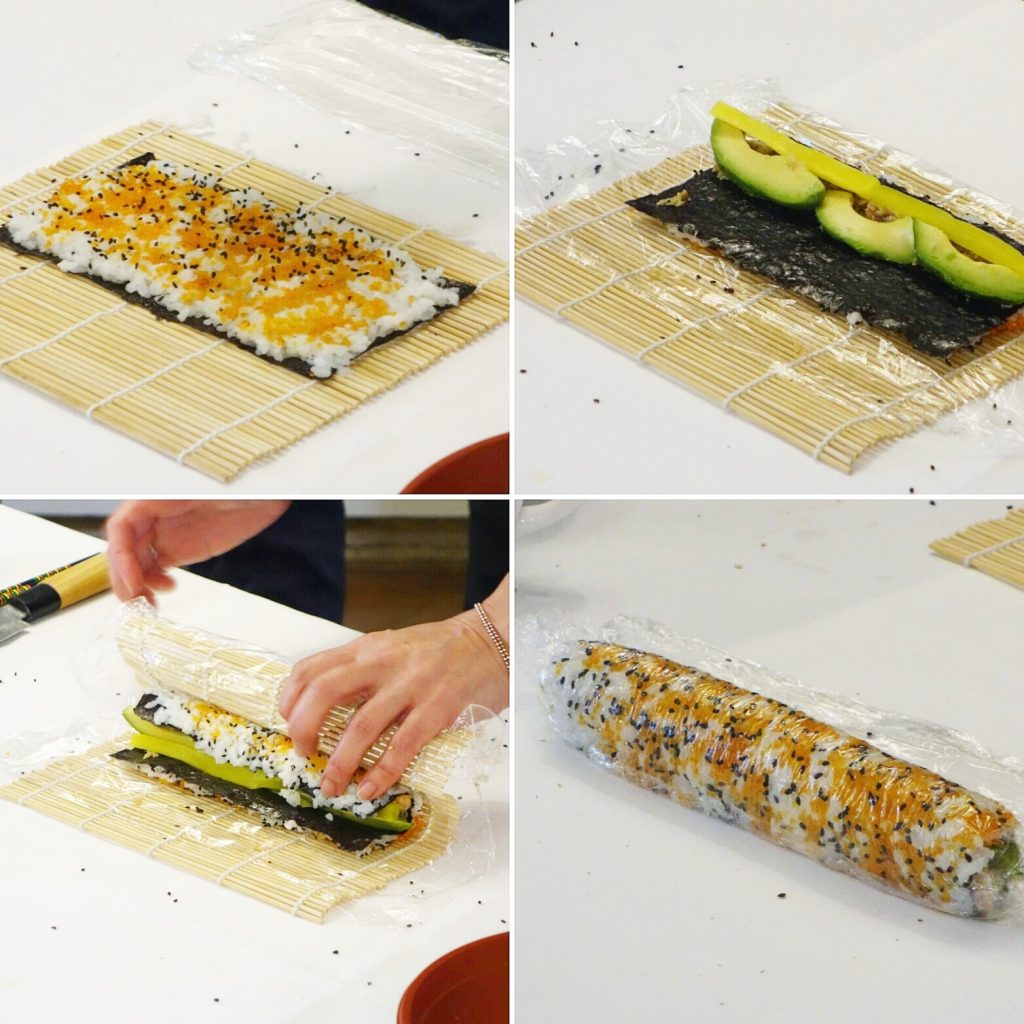 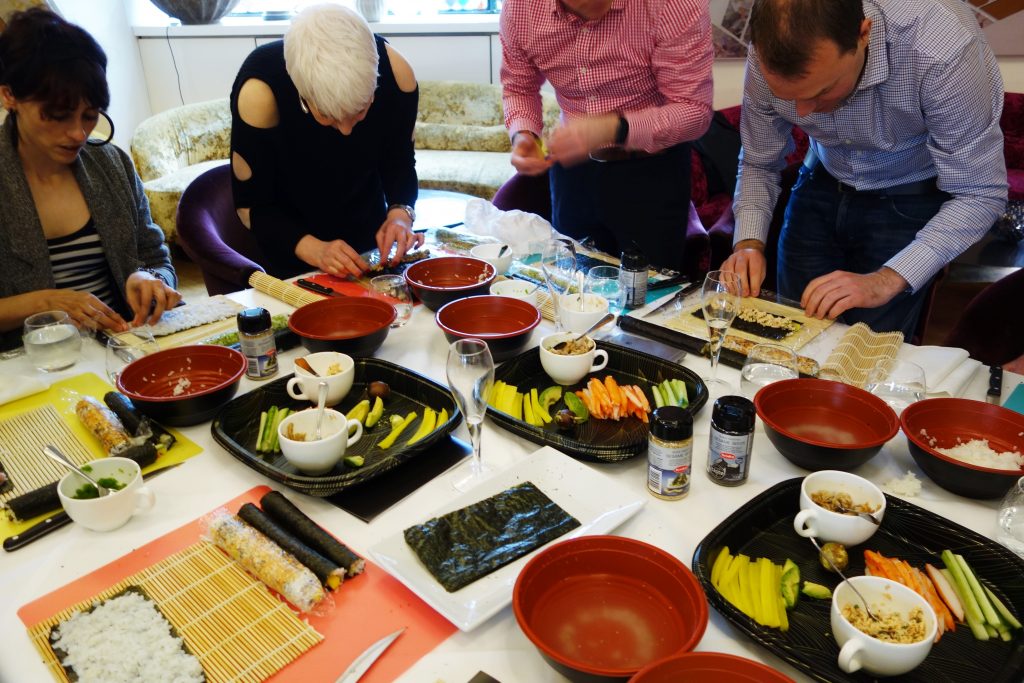 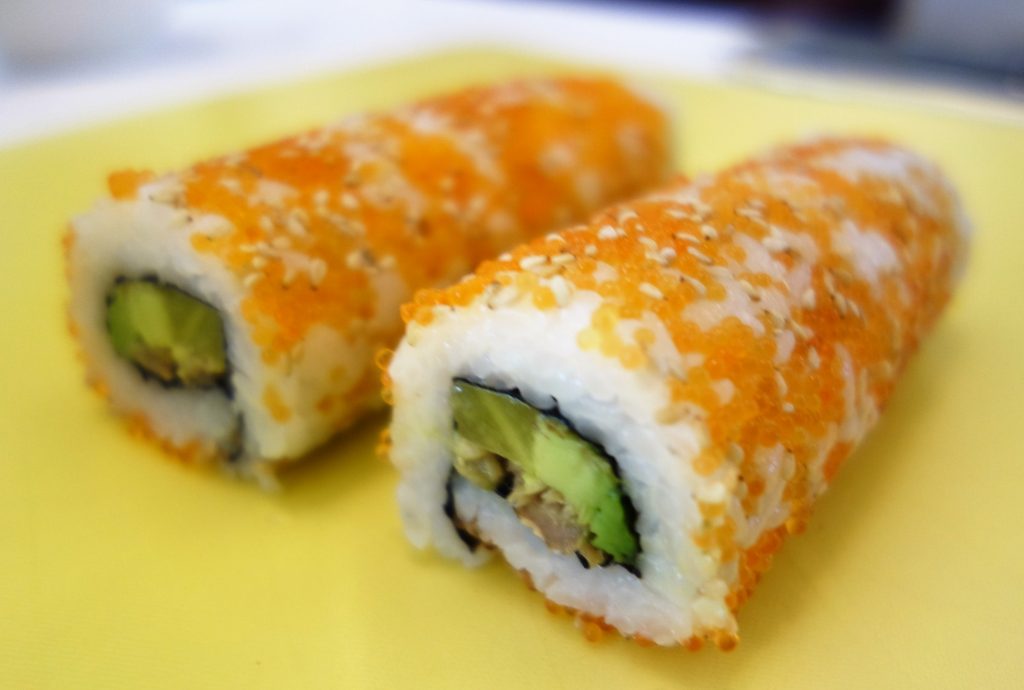 Once we had everything made and sliced, we finally got the chance to sit down and enjoy the fruits of our labour. Just as well as I was starving by this point! Even better, we got to taste some premium sake with our sushi. 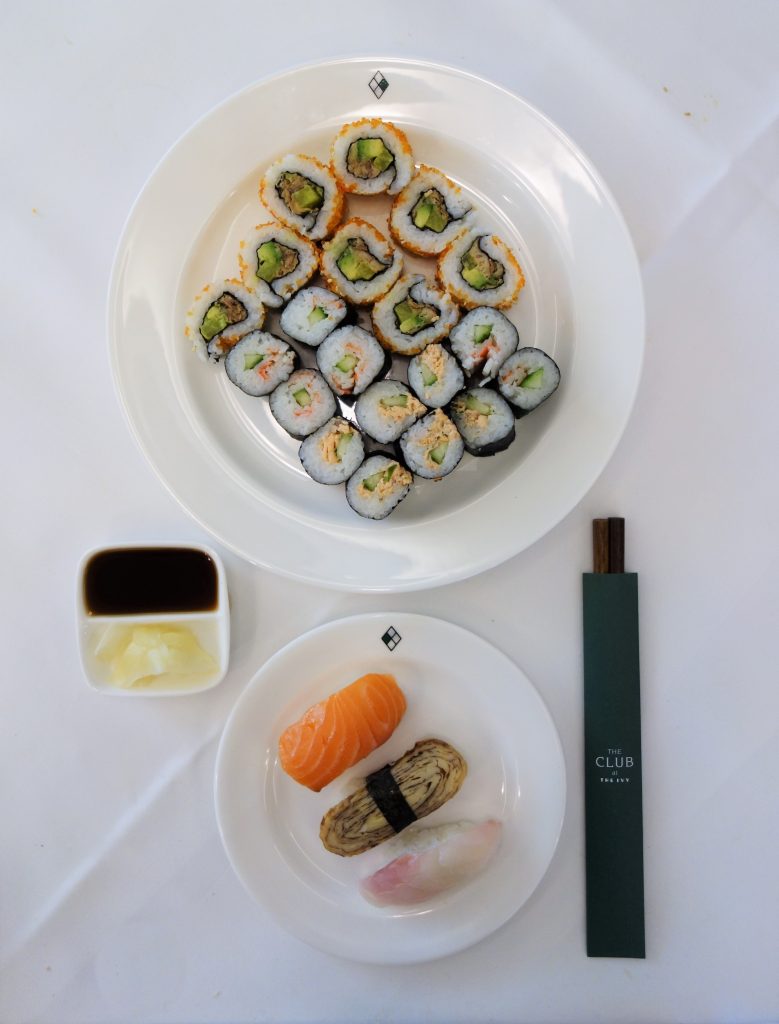 Everything tasted so fresh and delicious, and so different from the sushi I’m used to grabbing quickly in my lunch hour. It was such a lovely way to spend a Sunday. As we left, we were given a Yutaka sushi kit with everything we needed to make sushi at home including rice, sushi rice seasoning, nori (seaweed), rolling mat, ginger, soy sauce and wasabi paste. We also went home with a selection of recipes and Japanese food stockists.

Reiko is a fantastic teacher. She immediately puts you at ease with her humour and her passion for food. She hosts a variety of sushi and Japanese cooking classes and course which you can see in more detail here. Bear in mind that she is currently extending her kitchen so all her courses are scheduled to re-open in July when she will have a bigger and better kitchen in which to teach from.  Check out Reiko’s website for more details.