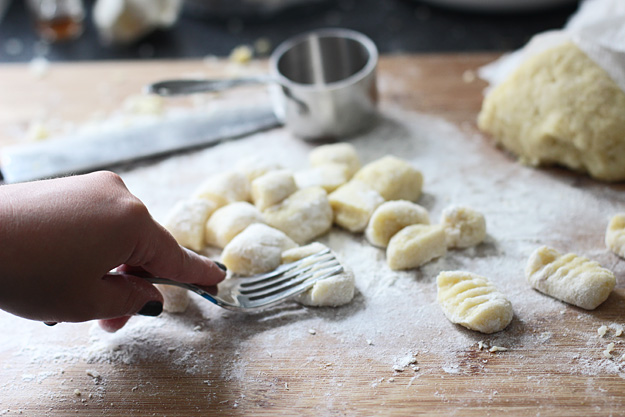 Summer so far has been pretty ok. Well, for London anyway. We’ve had quite a few hot and sunny days in a row and that’s quite a novelty. However, the beautiful weather broke last week and instead of sunshine we for thunder and lightning then high winds and heavy rain. Oddly, it was quite nice. There’s something kind of comforting about the rain lashing against the windows when you’re tucked up in your nice warm home.

Anyway, when the weather is like that I no longer want salads and steamed veg. I was comfort food. I want carbs. I suddenly thought a plate of gnocchi would be perfect, but I didn’t want to go out in the rain to buy it. Instead, I realised I had the ingredients to make my own gnocchi in my kitchen.  Essentially all you need is potatoes, flour and eggs.

So I switched my oven on to 190C/170C Fan/375F/Gas5, pricked a couple of large baking potatoes (about 500g) with a fork and placed them in the oven until they were soft. This took about an hour.

I removed them from the oven and placed them on the side to cool a little. Then I scattered 100g of plain flour onto a clean work surface, added a little salt and a grating of nutmeg. Once the potatoes had cooled down, I sliced them in half lengthways, scooped out the flesh then pushed it through a ricer onto the flour. 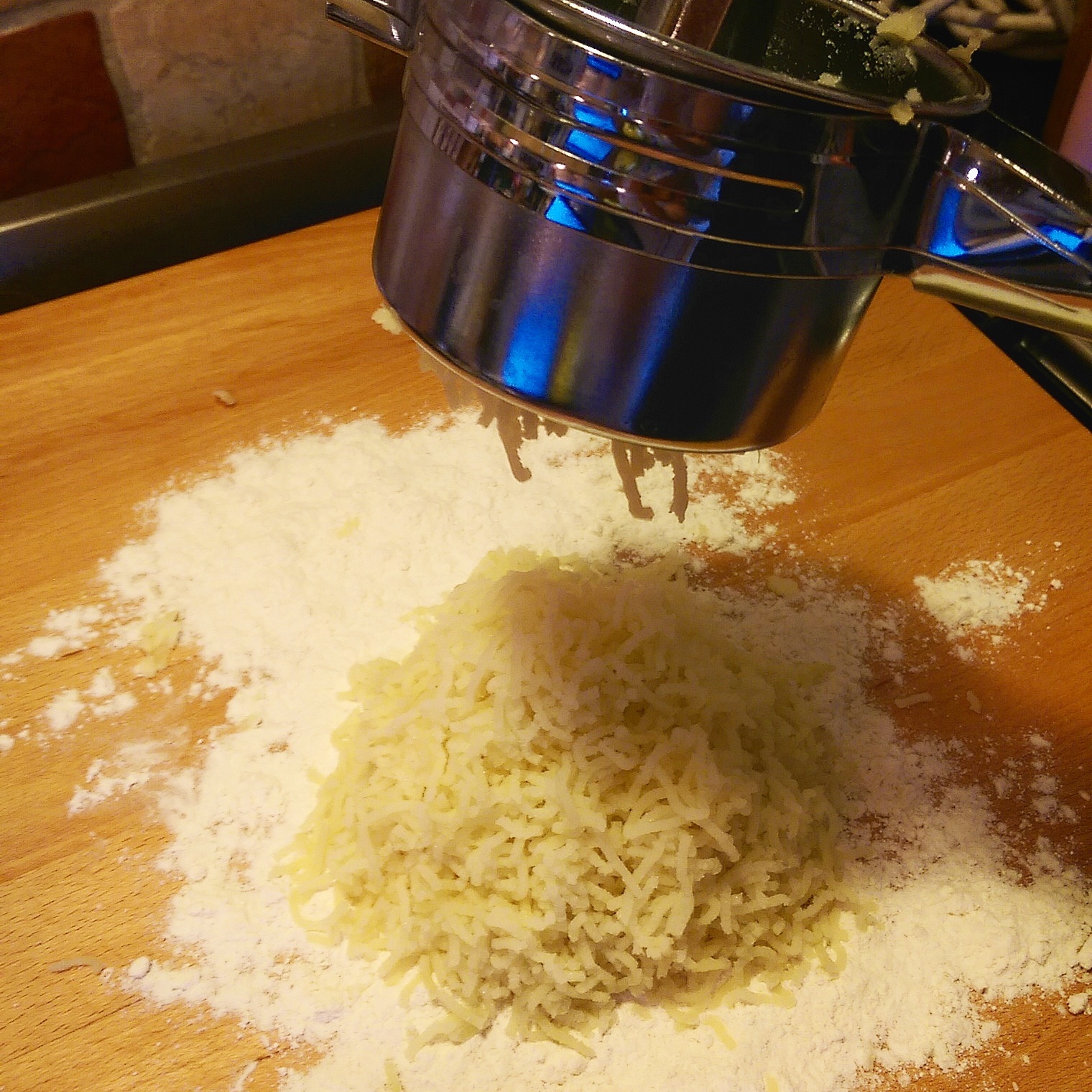 Then I made a well in the centre and added an egg, then mixed it all together until it became a soft dough. 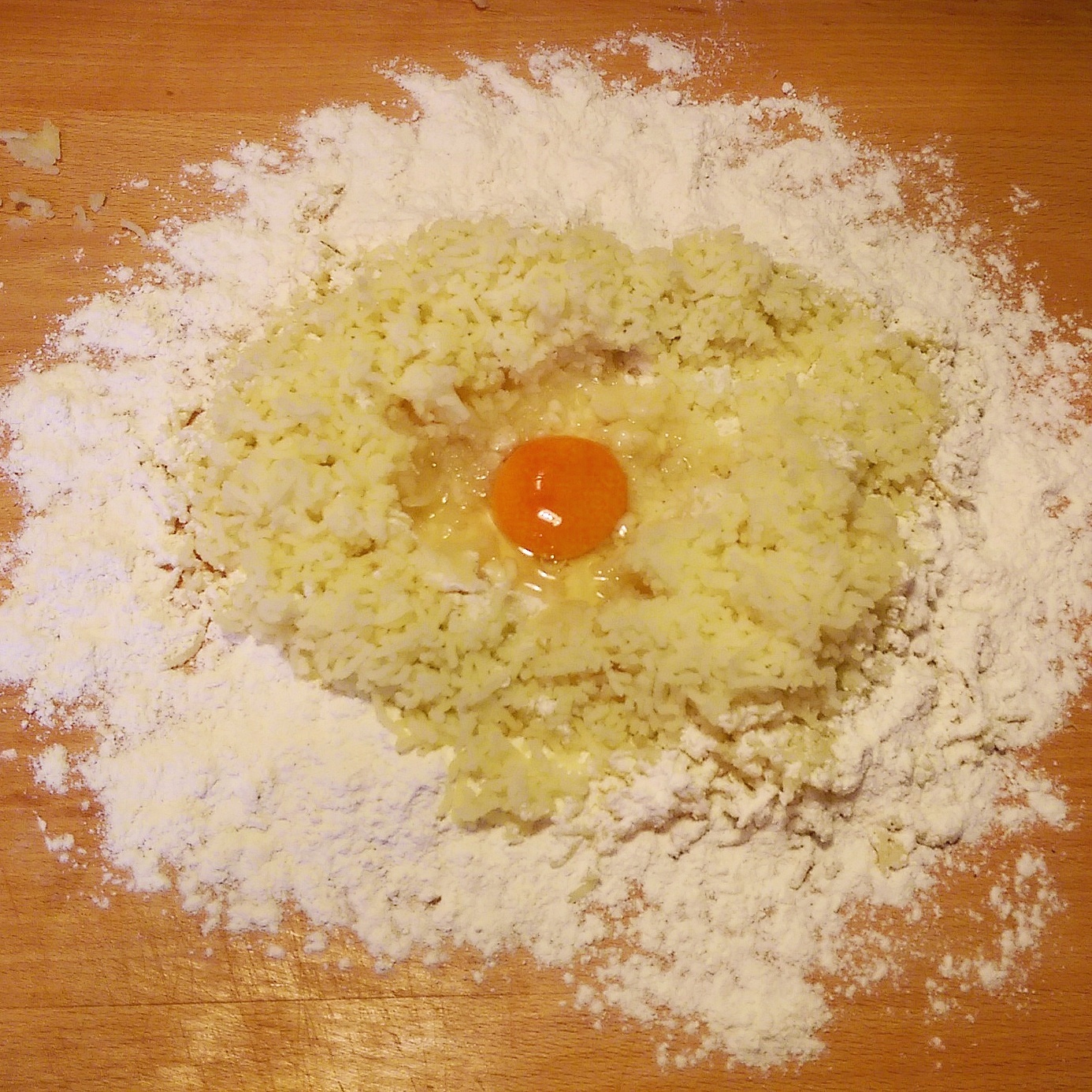 I put the dough to one side while I cleaned my work surface then used the rest of the flour to dust it again. I retuned the dough to the flour, flattened it into a square about 1.5cm thick, then cut it into strips about 1.5cm wie. Then I rolled them into sausage shapes and cut them at an angle into 1cm-wide pieces.

I rolled a fork over each piece, pressing my thumb into the back, then put the finished gnocchi on a flour-dusted tray. 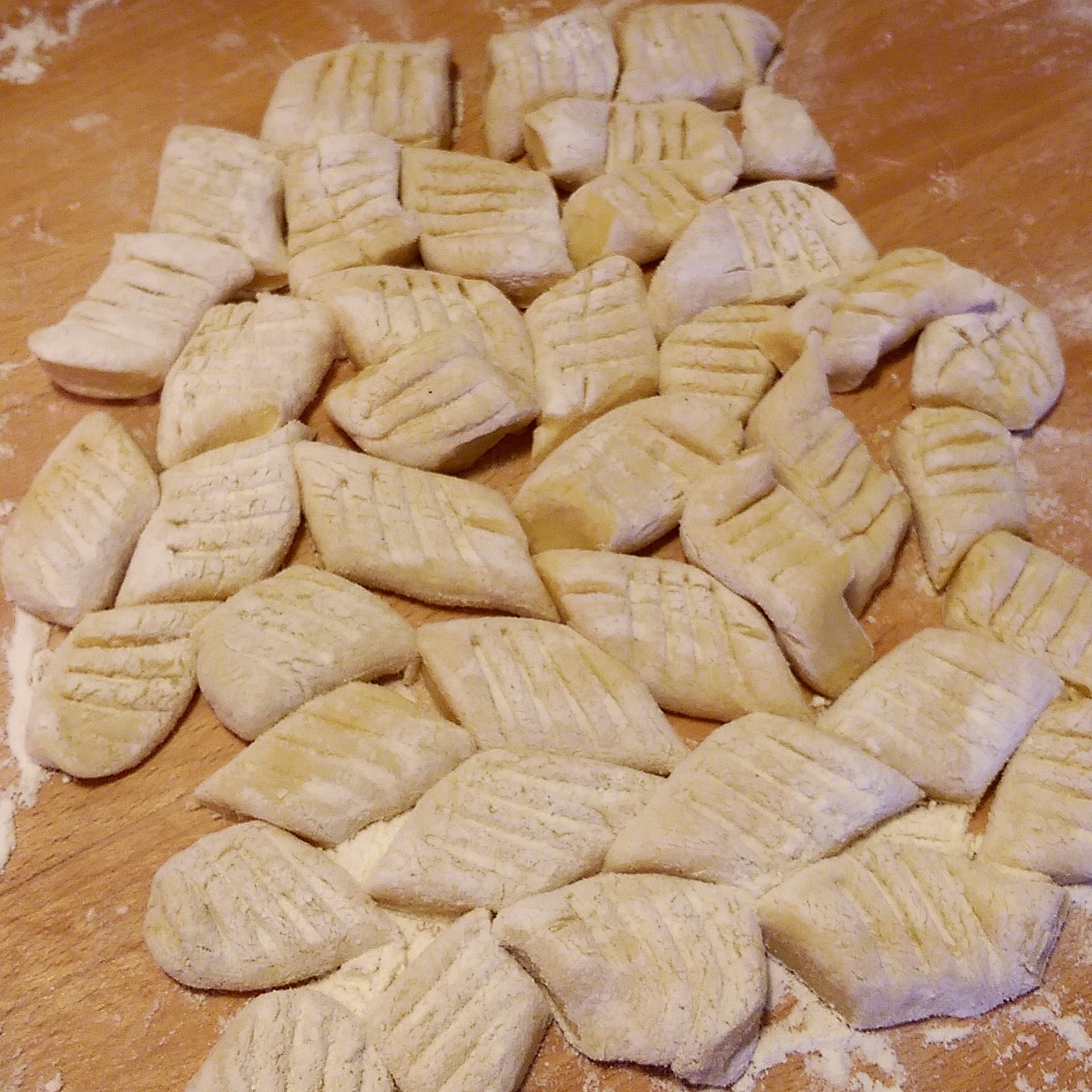 The thing I really love about gnocchi is how quick they are to cook. I boiled a pan of salted water, turned it down to a simmer then tipped in half the gnocchi pieces. Meanwhile, on another burner, I started to heat up a frying pan with a little rapeseed oil.

After a couple of minutes, the potato dumplings started to rise to the surface of the water. I scooped them out with a slotted spoon and transferred them to the frying pan to add a little texture to the outside. 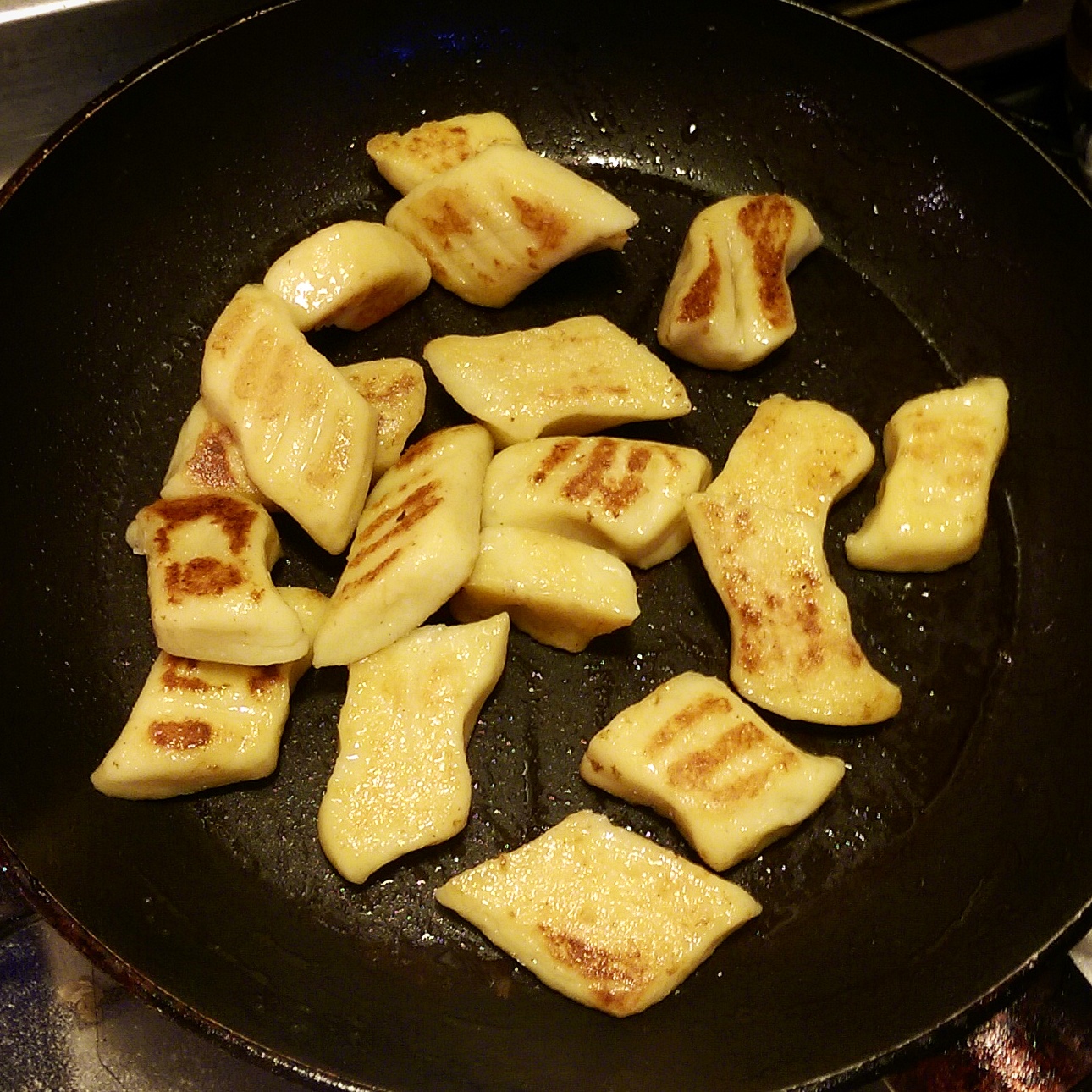 I find that gnocchi that is simply cooked in the water becomes a little boring to eat. I like the texture of them being a little crispy on the outside but still soft and fluffy on the inside. Then you can add them to whatever sauce you like. I sometimes like them with pesto, toasted pine nuts and some parmesan. Or with a creamy wild mushroom sauce. Or my favourite way…with a creamy blue cheese with toasted pecans.

This is so easy. First, I place pecans (alternatively you can use walnuts) in a dry frying pan over medium heat, keeping an eye on them to make sure they don’t burn. When they start to colour, take them off the heat and transfer to a plate.

In a pan, add some single cream, your favourite blue cheese, (I used Roquefort), a grating of fresh nutmeg, salt and pepper, then stir through for a couple of minutes. I keep some of the blue cheese aside to add to the top. Then when the gnocchi is ready, I tip it and the pecans into the sauce and serve. Perfect comfort food! 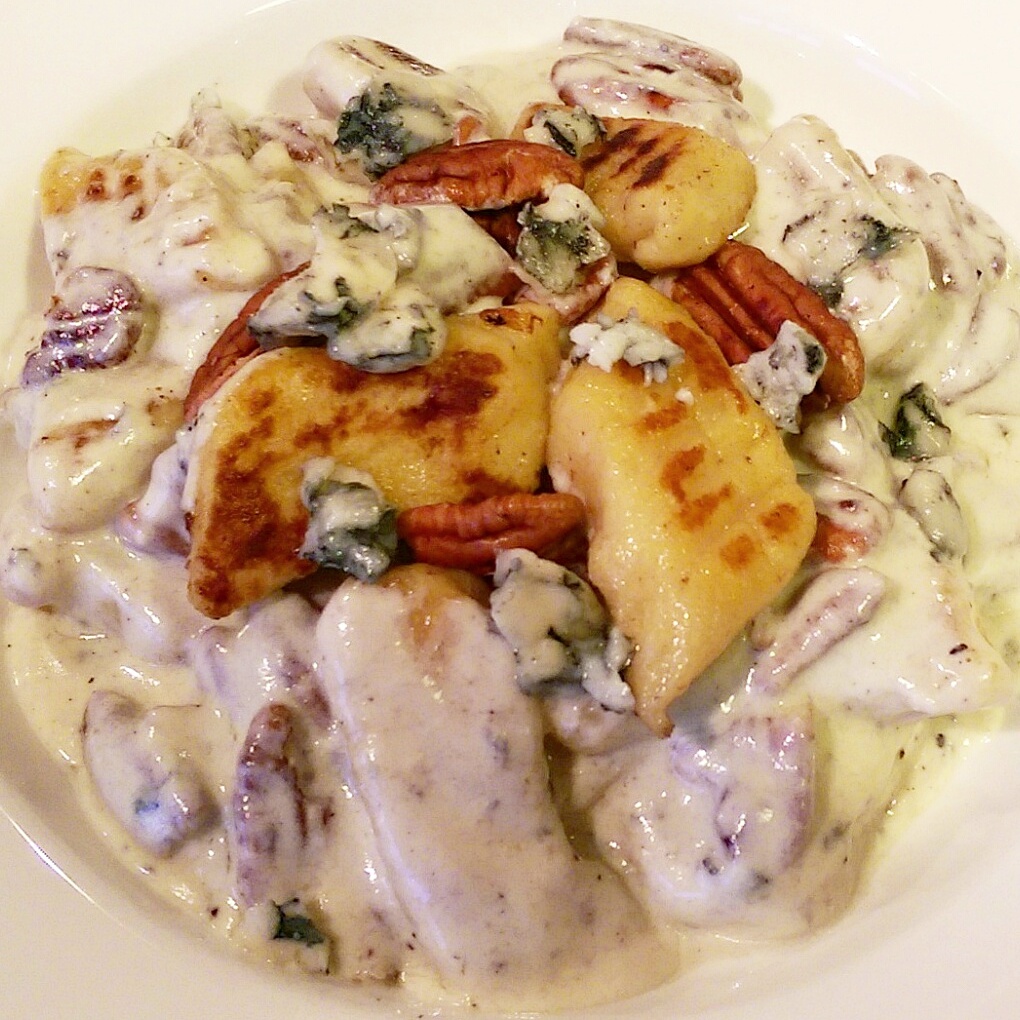 I made enough for two portions so with the gnocchi I didn’t eat, I froze it. The best way to do this is to play the gnocchi on a plate and place it in the freezer until each piece has frozen, then transfer to a freezer bag. You don’t have to defrost it before cooking, you simply add the frozen dumplings to boiling water and wait for them to rise to the surface. They just take a couple of minutes longer than usual. But its still pretty fast. Perfect to have in the freezer for those nights when you come home from work and don’t have the energy to cook. This is a delicious meal that is ready-made and takes just minutes to cook!