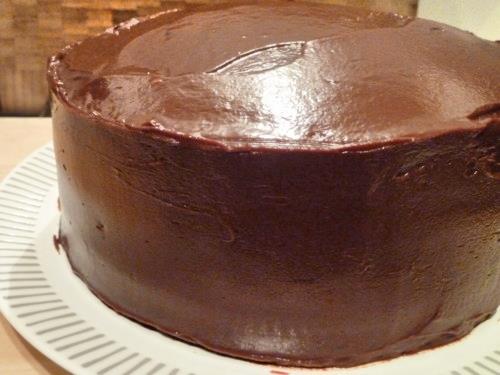 It’s my chocoholic friend’s birthday today so last night I decided to make her the chocolatiest (is that a word??) cake I could. I remembered a recipe I saw in Edd Kimber’s new baking book for his Ultimate Chocolate Cake. A 3-sponge chocolate cake with ganache in between each layer and spread over the top and sides. Immense!

This cake was relatively easy to make, but the icing took a bit of time and patience! But the end result was worth it. The sponges were as light as air and the ganache was sublime. It also didn’t taste too sweet or sickly which was a surprise. I thought it might, given how it looks.

My chocoholic friend adored it and even my non-chocolate loving friends loved it! Overall, it was a great success!

Preheat the oven to 180C/160C fan/gas 4. Grease and line three 20cm round cake tins with baking parchment, then grease the parchment too. Melt the chocolate in a microwave or a heatproof bowl over a pan of gently simmering water, making sure the base of the bowl doesn’t touch the water. Set aside to cool slightly. In a medium bowl, whisk the water and cocoa powder together, then whisk in the buttermilk and set aside. Sift the flour, bicarbonate of soda and salt together into a medium bowl. In a separate bowl use an electric hand mixer beat the butter, sugar and vanilla together until light and fluffy, about 5 minutes. Beat in the eggs, a little at a time, beating until fully combined. With the mixer on low pour the cooled chocolate into the mixture.. Once fully combined, add a third of the flour mixture followed by half the buttermilk mixture. Repeat and then add the final third of flour mixture.

Divide equally among the three prepared tins (I did this by weighing the mixture and dividing it by weight. A bit messy but worth it!) and bake for 25–30 minutes or until a cocktail stick inserted into the centre comes out clean. To make the ganache, melt the butter, chocolate and golden syrup in the microwave or a heatproof bowl over a pan of gently simmering water, making sure the base of the bowl doesn’t touch the water. Once melted and smooth, add the cream and mix to combine. Remove from the heat and allow to set until spreadable, about 15–20 minutes. If the ganache is not setting at room temperature you can refrigerate, but watch carefully that it stays spreadable.

When the tins are out of the oven, cool in the tins for 10 minutes before inverting onto wire racks to cool completely. To assemble the cake, put the first layer of cake on a serving plate or cake board. Spread a layer of ganache over the top of the cake and put the second cake layer on top, then repeat. Put the final layer of cake on top and spread the remaining ganache over the top and sides of the cake. You can buy Edd Kimber’s book, The Boy Who Bakes here.