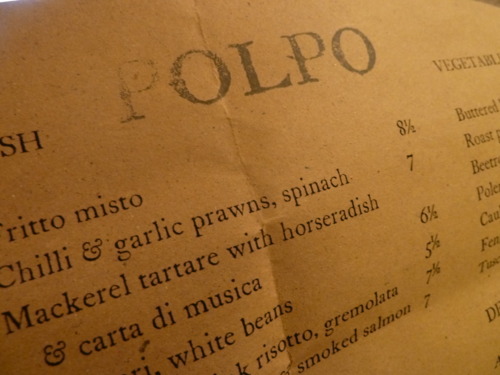 I have been trying to get into Polpo in Soho for months. I have been to their sister restaurant Spuntino many times since being introduced to it in July last year. You can see my gushing review of it here – http://aspoonful-of-sugar.tumblr.com/post/7622292302/spuntino

I had heard that Polpo was as good, if not better but every time I tried to get in, I was turned away as the queue was too long. I had tried running there straight from work in order to secure a table but even arriving at 6.30pm, I was still too late.

So when my good friend and restaurant-buddy Paul and I booked in a post-Christmas catch up last week, I was sure that this would be the night we’d get in. Afterall, it was a Wednesday in mid-January. I assumed that most people were broke and easing off eating out in January. I assumed wrong. At 6.25pm Paul called me from the restaurant urging me to hurry. They had one table left and wouldn’t let him sit there on his own to wait for me. Apparently they need both members of the party to be present in order for you to secure a table. So I ran down Regent Street and made it to Beak Street just in time to get our table. Within minutes a queue had formed at the door and the place was packed all night.

Like Spuntino, Polpo looks like it was lifted from Brooklyn. It has a rustic, stripped-back industrial feel with exposed brick walls, a black-and-white tiled floor and low hanging bulbs over the bar area. The brown paper menu of small plates (around £2 to £8) makes for appetising reading.

It was too dark to take good photos so I have lifted some I found online. We started with arancini – small risotto balls with a melting mozzarella centre and a distinct taste of thyme. These really were delicious. They weren’t greasy at all but were instead surprisingly light. Next up was goat cheese, roasted grapes & walnut bruschetta. I personally loved this. The creaminess of the cheese was offset perfectly with the crunch of the toasted walnuts, as the sweet grapes burst in your mouth. This was quickly followed by pork belly and a side order of garlic and rosemary roast potatoes. I was slightly disappointed with this. The pork itself was beautifully soft and tasty but I like crackling if I’m having pork belly. For me its the best bit, but this was topped with crushed hazelnuts to give it some bite. This didn’t work for me at all. Neither did the bitter taste of the radicchio that was clearly there to balance out the sweetness of the pork and hazelnuts. I didn’t care for it myself. The potatoes however were delicious. But you can’t really go wrong with roast potatoes. The next dish was the most disappointing…roast pumpkin with parma ham and ricotta. I can’t find a photo of this online so it may be a new dish. I was expecting diced pumpkin with melted cheese topped with parma ham but instead, out came two giant wedges of pumpkin, topped with a slice of prosciutto and some ricotta crushed on the top.

Because the wedge was so big, it wasn’t as soft as it could be. In fact, some of it was too hard to eat. There was also so much ground pepper on it that it looked like a layer of soot! I had to scrape it off in order to get the taste the pumpkin. The ricotta didn’t complement the dish and its not often that I don’t like cheese. Paul and I ended up leaving it after a few bites. It was a shame as I was really looking forward to it but it left a rather bad taste in our mouths.

For pudding we opted for the pot of tiramisu. This was everything a tiramusu should be….light and creamy with a beautiful hit of coffee and a slight hint of alcohol at the bottom, generously topped with cocoa. Overall I was slightly disappointed with Polpo. Maybe I had built it up too much in my head before going. Maybe the fact its always been to busy to get into had made me think it was extra special. Maybe I thought it would be to the same standard as Spuntino…I don’t know. But I felt rather underwhelmed by the end of the evening.

To their credit, I loved the arancini and the goats cheese bruschetta but I felt let down by their pork belly and pumpkin. Their tiramisu was delicious, but I would expect nothing less from an Italian restaurant. Their staff were really friendly and helpful, even though the guy on the door can be rather brusque. I’m not sure I would go again. Perhaps if a friend really wanted to try it out and I ordered differently, I would have a better experience but I like to leave a restaurant having enjoyed everything I ate, and for a place serving tapas sized dishes, I felt that £88 for the two of us was rather steep.

A LITTLE OF WHAT YOU FANCY, DALSTON