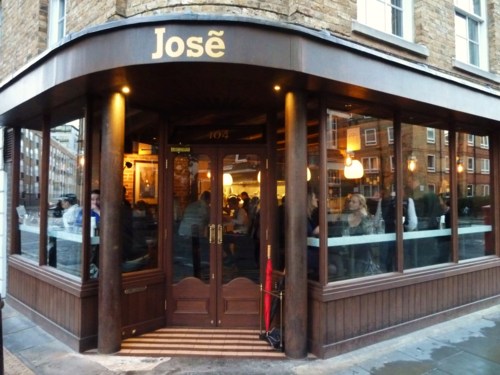 Last Tuesday, I had the most wonderful night with my ultimate eating partner and treasured friend, Paul. It was a last minute night out which made it even more lovely. We both fancied a catch up over a few glasses of wine and a bite to eat.

Just as I was tapping ‘How about we go to José on Bermondsey Street?’ into my Blackberry, an email popped up from Paul saying, “Wanna try the new tapas place on Bermondsey St? Think it’s called José.” This is not an unusual occurrence. Sometimes I think Paul camps out in my brain, sending me subliminal messages about food and restaurants! 😉

And so it was decided….we’d go to José. It was on my radar as I’d read a lot on José Pizarro recently. His new book ‘José Pizarro’s Spanish Flavours’ has just been released and I keep seeing his name popping up in food magazines and food websites. I’d also just made one of this recipes from the book a week before!

José Pizarro, who was the chef at the hugely popular Brindisa for nearly 5 years (I’ve given up ever eating there again as its always so busy I can never get in!), now has his own sherry and tapas bar, José on Bermondsey Street and a full-size restaurant, Pizarro a few of blocks down the street from there.

Paul and I met at London Bridge tube station and walked through the wet streets of South East London to Bermondey Street. We soon found ourselves at the bustling José tapas bar. Even though it was 7pm on a wet and windy Tuesday night, it was already pretty busy. So busy in fact that we couldn’t sit down! Saying that, there aren’t many opportunities to sit. The space itself is very small and therefore only offers up a few stools, but at least it feels authentically Spanish. In Spain, the tapas bars are usually standing room only so I guess it makes sense that a tapas bar in London should be the same.

The no-bookings policy means you have to take your chances on whether you can find a space. If it was this busy on a Tuesday, I don’t think I’d even attempt to come here on a Friday or Saturday!

As we walked through the door, we were immediately greeted very warmly and ushered to the bar where we said we were happy to stand until two seats became available. So there we stood…under the dangling hams! And some almonds and olives to snack on, while we decided what else we wanted to order. DAMN! Those were good olives. The menu is written up on chalkboards above the bar. Now, I am a bit of a chorizo freak. I eat it ALL the time. Every day. I adore it. They had two chorizo dishes on their menu – cooked and sliced – so I asked the waitress to recommend the best one. She immediately recommended the sliced organic one. I’m so glad I asked her. I would probably have opted for the cooked one if I hadn’t asked. But this was incredible. It was velvety soft and deliciously smoky. As soon as it touched your tongue, it melted onto it. Paul and I stared at each other, wide-eyed in amazement by how good it tasted. I have eaten a LOT of chorizo in my time and this is the best sliced chorizo I’ve tasted.

The waitress serving us was really lovely. So friendly, knowledgeable and enthusiastic about the food. We were happy to order whatever she recommended to us. She suggested the prawns in garlic and chilli… I’m so glad we did. These prawns were beautiful. The best thing is, they tasted of prawns. I know that sounds a bit obvious but often with garlic chilli prawns, all you taste is the garlic. But with this, the main flavour was the sweetness of the prawns themselves. They were truly lovely.

We also ordered tomatoes on toast. This very simple dish was very good, but the mushed tomatoes were cold on the hot crunchy toast. Paul and I both said that we would have preferred the tomatoes to have been warm on the toast. I think it would have brought the flavour out a bit more. If they had been warm, this would have been perfect. Apart from that though, it was still lovely and fresh and light and nicely seasoned. The ham croquettes were deliciously crispy on the outside and smooth, creamy and rich inside. The waitress had clearly left the best til last. This was melt-in-the-mouth, stunning! The pork was so soft and tender, and it was simply drizzled in olive oil and scattered generously with flakes of salt. I loved this. It was divine. Paul wasn’t as taken with it as I was, but he doesn’t love salt in quite the same way as I do!

Paul and I had a great night at José. Sometimes the best nights are ones you don’t plan. The wine was great, dishes of fresh, tasty food came and went swiftly, the staff were friendly and knowledgeable, the atmosphere was buzzing all night long. I’ll definitely be back, I need more of that chorizo!