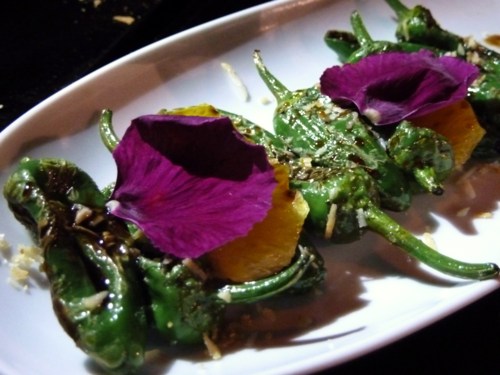 Last week, I went for dinner with my fabulous friend Paul and his gorgeous husband Heath at DSTRKT. For a nice change, I had heard nothing about DSTRKT before we booked it. Paul and I had planned to go elsewhere for dinner but then he saw that DSTRKT was doing a deal on their tasting menu so we decided to book that instead. And wow, what a fantastic decision!

Before I go to any restaurant, I usually pour over the menu days in advance and know exactly what I’m going to order. I love doing this as I get excited before I go and I really look forward to it. But in this instance, I genuinely had no idea what was in store for me. I didn’t read any reviews online. I literally went in with a blank slate.

DSTRKT looks very unassuming from the outside. Situated on Rupert Street, just a stone’s throw from Piccadilly Circus, I arrived 5 minutes before Paul and Heath. As I entered the rather dramatic doorway and gave my name to the very glamorous receptionist, she showed me downstairs where I was met by another glamorous assistant who took my coat and showed me into the lounge bar. I was amazed at the size of the place when I walked in, its huge! It was pretty empty but it was only 7pm. The room is beautifully lit so it doesn’t look like a huge open space. Paul and Heath soon arrived and we were shown to our table. Luckily for us, our table was situated on the mezzanine right above the kitchen so we were able to see the hive of activity below us. As someone who loves seeing how restaurant kitchens work, this was the perfect spot for me. As soon as we were seated, our maître d’ for the night, Guillermo, introduced himself and told us he would be looking after us all evening. We told him that we would be having matching wines to accompany our tasting menu and then he then presented us with delicious champagne cocktails. This was beautifully presented on a little mound of sand. Paul and Heath knocked theirs back straight away and with what looked like incredible ease. I, having never been a huge fan of oysters, was a tad nervous. It looked huge! And I was right. Once it was in my mouth I really struggled to swallow it. I could see Paul eyeing me nervously from across the table, praying that I wasn’t going to gag on it. He and I were both in luck. I did kind of gag on it, but I think I hid it well!

In truth, I don’t really ‘get’ oysters. I don’t see the point of swallowing something so big (it was like swallowing a very large boiled egg in one!), only to taste salt water in my mouth. I get no satisfaction from it. But I know lots of people who claim to love oysters so clearly this is just a personal thing. But then again, I do think it might be a case of the Emperors New Clothes! These were stunning! Seared every so slightly around the sides, gorgeous and pink inside. This was so full of flavour and yet light as air. I could have had so much more. The only problem with tasting menus is when you find something you love, you really only have a couple of bites of it. This was a problem again with the next dish. Paul was making all sorts of noises whilst eating this. It was delicious. It was like a party in your mouth. You could taste each ingredient and they complimented each other beautifully. It was so fresh tasting and yet it really packed a punch in terms of the flavours.

The dishes were coming out pretty fast from the kitchen and as soon as we finished, we were presented with Sautéed Padron Peppers with a Sherry Vinegar Reduction and Orange Segments… Both of these were delicious. The orange segments complimented the peppers so well. Its not something I would have thought to have with padron peppers but I certainly will in the future. You should definitely try it.

The scallops were perfectly cooked. Paul said they were the best scallops he’d ever had.

Again, rather quickly, we were presented with Grilled British Lamb Cutlets with Smoky Eggplant Puree and Piquillo… And to accompany that, Grilled Broccollini with Burrata, Pomegranate, Micro Basil and Garlic… My God, this was amazing. The lamb melted in my mouth and we couldn’t figure out how it could have such a strong chargrilled flavour when it wasn’t burnt to a crisp! Then I tasted the eggplant puree on its own and realised that it was the eggplant that had probably been burnt to a crisp. It had such a strong smoky flavour, that eating it with the lamb made everything taste smoky. It was heaven! And with the added sweetness of the piquillo, it truly was the dish of the night. Again, I wish I could have had more of it.

And the grilled broccolini with the burrata was insanely good. You really couldn’t have put a better dish in front of me and I was grinning from ear to ear.

When we were finished and our plates were being cleared from the table, Paul asked if we could have a 15 minute break before our pudding came. In all honesty, each course had come out so quickly that we needed a few minutes to take in what we’d just eaten and allow ourselves a rest before we went onto the sweet stuff.

We noticed the restaurant was a lot busier now and there was a hive of activity in the kitchen. Not only was it nice to have a break from the food, but it was a good opportunity for me to catch up on my wine! The courses had come out faster than I could drink each glass of wine and I was lagging behind. I must say though, the wine was superb.

After our rest, we were looking forward to our pudding. But first, Guillermo brought a sweet appetiser… I’m still not completely sure what it was! Whatever the filling, it tasted like it was dipped in molasses and then dipped in popping candy. Definitely not something we were expecting! But lovely nonetheless. This was a little piece of heaven. I didn’t think I’d like the pink peppercorns but they really went well with the chocolate.

We also had ice-cream and sorbet on crushed biscuit crumbs. Next, Guillermo gingerly approached our table with a bowl of liquid nitrogen and some dried raspberries. He swirled them in the liquid nitrogen for a few seconds and then gave them to us to try. Next we were given espresso martinis which were heavenly…also Paul’s favourite! This was the perfect way to finish off the meal. We were all nicely full but not stuffed or bloated.

This wasn’t just a great meal, it was a gastronomic experience. I like when food is an event. The food was stunning throughout, and the wine pairings were perfect.

My only complaint, and its a small one, is that the courses came out a little too quickly. I would have liked a bit more time in between them to fully take in each course and to appreciate the wine with it. As it was, I found myself almost downing glasses of wine to catch up with the next courses pairing!

The staff couldn’t have been nicer. Often in places like these you have to contend with snooty staff who clearly don’t want to serve you, but everyone we came into contact with was delightful. Especially Guillermo. He was friendly, funny, knowledgeable and he even brought the chef up to our table so we could thank him for such a wonderful meal.

Staff like this really make a huge difference when you’re eating out. We decided there and then that we would come back in June for my birthday. When we mentioned this to Guillermo, he gave us his number and he said he would make sure I have the perfect birthday. He then showed us around the club with is situated right next to the restaurant, separated by a thick curtain.

We all left in high spirits, having had a truly fantastic evening and we all can’t wait to go back!
DSTRKT, 9 Rupert Street, London, W1D 6DG
Tel: 0207 317 9120
e: reservations@dstrkt.co.uk
www.dstrkt-london.com
Twitter: @dstrktlondon