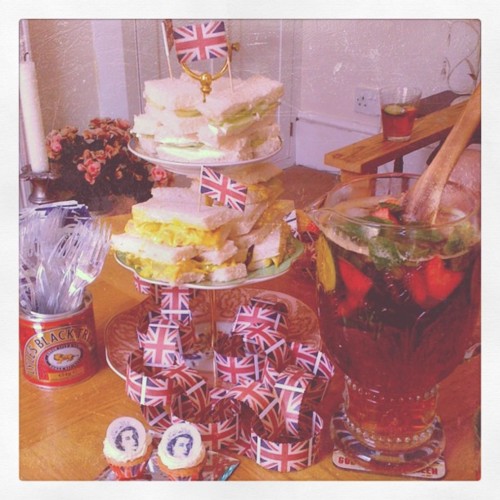 This weekend celebrates the Queen’s Diamond Jubilee, and London looks incredible. Union Jacks adorn every part of the city, as far as the eye can see. It’s a beautiful sight and makes you feel very proud to be British. Even better, we all have an extra day off work! And there’s nothing we Brits love more than a bank holiday weekend. Throw in some bunting, party food, Pimms and bunting and we’re all raring to go!

This year there is a record number of street parties planned with almost 9,500 road closure applications having been granted, that’s 4,000 more than for last year’s royal wedding. With tens of thousands of events planned in streets, gardens, parks, pubs and church halls around the country, the scale of celebration will the off the charts!

This Sunday, 3rd June 2012, over 1000 boats will gather on the River Thames in preparation for The Queen to take part in the Thames Diamond Jubilee Pageant. Starting between Hammersmith and Battersea and finishing down from Tower Bridge, it will be one of the largest flotillas ever assembled on the Thames. Boats of all shapes and sizes will be decked out in Union Jack flags and streamers, and passenger boats carrying flag-waving members of the public will be joined by music barges, all celebrating Her Majesty’s 60 year reign.

The preparations have already started as you can see from this photo, taken by my lovely friend Jason: Now, as much as this weekend’s Jubilee festivities is all anyone can talk about in London at the moment, unfortunately, the excitement has not reached Glasgow where I am assured by my brothers that no-one is talking about it. What a shame. Especially as I booked this weekend to fly home and visit my family months ago, before I realised quite how huge this weekend would be in London.

So yes, I’m officially gutted that I’m missing out on all the street parties my friends have invited me to and the amazing party atmosphere that will be engulfing London this weekend. And this is why I decided to hold my very own Jubilee party last Sunday…a week early!

The idea began when I decided that I wanted to make a Union Jack cake. Then I saw these gorgeous cupcake toppers on this website – http://bit.ly/LxKDbx – and decided I could not live without them! And so decided to make some mini cupcakes. THEN, I found some gorgeous Union Jack cupcake cases and had to buy them too. It just made sense that I should have a party so I could share the cake with my friends as opposed to scoffing it all myself! And I love any excuse to have a party.

And so, over the last week, I turned into Nigella on speed! I’ve been cooking and baking constantly, I’ve been making list after list, trying to organise it all. I even popped into Liberty to buy myself a special notebook so I could write down all my notes. (I told you, I like buying gifts for myself!)

And so, Sunday came…the bunting was up… The sandwiches were made….Coronation Chicken (of course), egg mayonnaise and cucumber and cream cheese… A jug of Pimms was on the go… The mini cupcakes with the ‘Royal’ toppers were ready… Fairy cakes on my London-inspired cake stand (from Sainsburys)… Millionaire shortbread, so we have a bit of chocolate caramel sweetness.. And the pièce de résistance, the thing that started it all off in the first place…my Union Jack cake! I added my Royal pop tops (http://amzn.to/LABrTF but you can get these in most shops at the moment)… Unfortunately, it was 29 degrees outside, the hottest day of the year so far, and my flat is like a sauna at the best of times. Did I mention I have no outdoor space?!

So my poor friends had to endure being indoors instead of sunbathing outside. But, bless them all, not one of them moaned or complained. I’d half expected them not to turn up.

It was such a great party and we all had such a lovely day. I love having my friends together in one place. And the cherry on the cake was that my good friend Trenham, who moved to Melbourne 2 years ago, (his blog is londonerdownunder.tumblr.com) was back in London on holiday. It was amazing to have everyone back together again. The party ended up in the pub round the corner at about 8pm and we sat out in the garden drinking Prosecco until midnight. What a perfect day!

God Save the Queen!