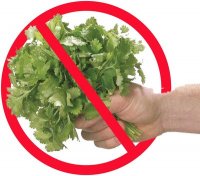 Food debates don’t usually come more heated than the coriander/cilantro debate. Coriander is like marmite – you either love it or you hate it. I hate it. Those prickly looking small green leaves provoke a primal revulsion in me. Sometimes they sneak into salads and I don’t notice them until they’re in my mouth. Suddenly I freeze and have to (delicately) remove the food fom my mouth. I physically cannot eat it. The only other thing I can’t eat is chilli but that’s the heat aspect of it. The actual taste of coriander repulses me. It tastes metallic and soapy. However, my best friend loves it and puts it in everything. So how can I hate it so much and more importantly, how can she love it so much?? Some suggest that there may be genetic factors that contribute to your preference. There definitely seems to be a huge discrepancy in what the lovers and haters smell and taste.

In 2002, Larry King asked Julia Child what foods she hated…

Julia Child: “Cilantro and arugula I don’t like at all. They’re both green herbs, they have kind of a dead taste to me.”
Larry King: “So you would never order it?”
Julia Child: “Never, I would pick it out if I saw it and throw it on the floor.”

Julia Child is not alone in her feelings about this hateful herb. There are several ‘I hate coriander’ and ‘I hate cilantro’ pages on Facebook with thousands of fans plus numerous blogs such as http://ihatecilantro.com/

The plant is named after koris, the Greek word for bug, as the unripe fruits have a smell that has been compared to that of bedbugs. The Oxford Companion to Food notes states that “Europeans often have difficulty in overcoming their initial aversion to this smell” yet coriander is loved and happily consumed by millions of people around the world, particularly in Asia and Latin America. So why the divide? Do you love it or hate it?