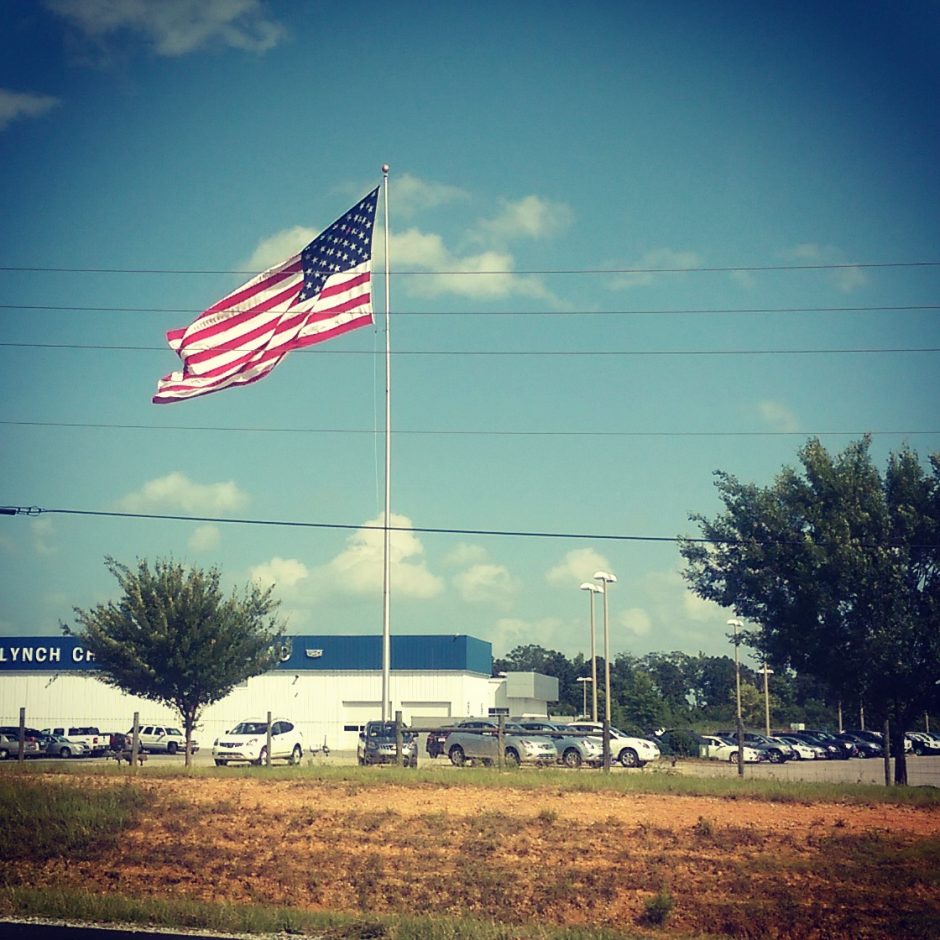 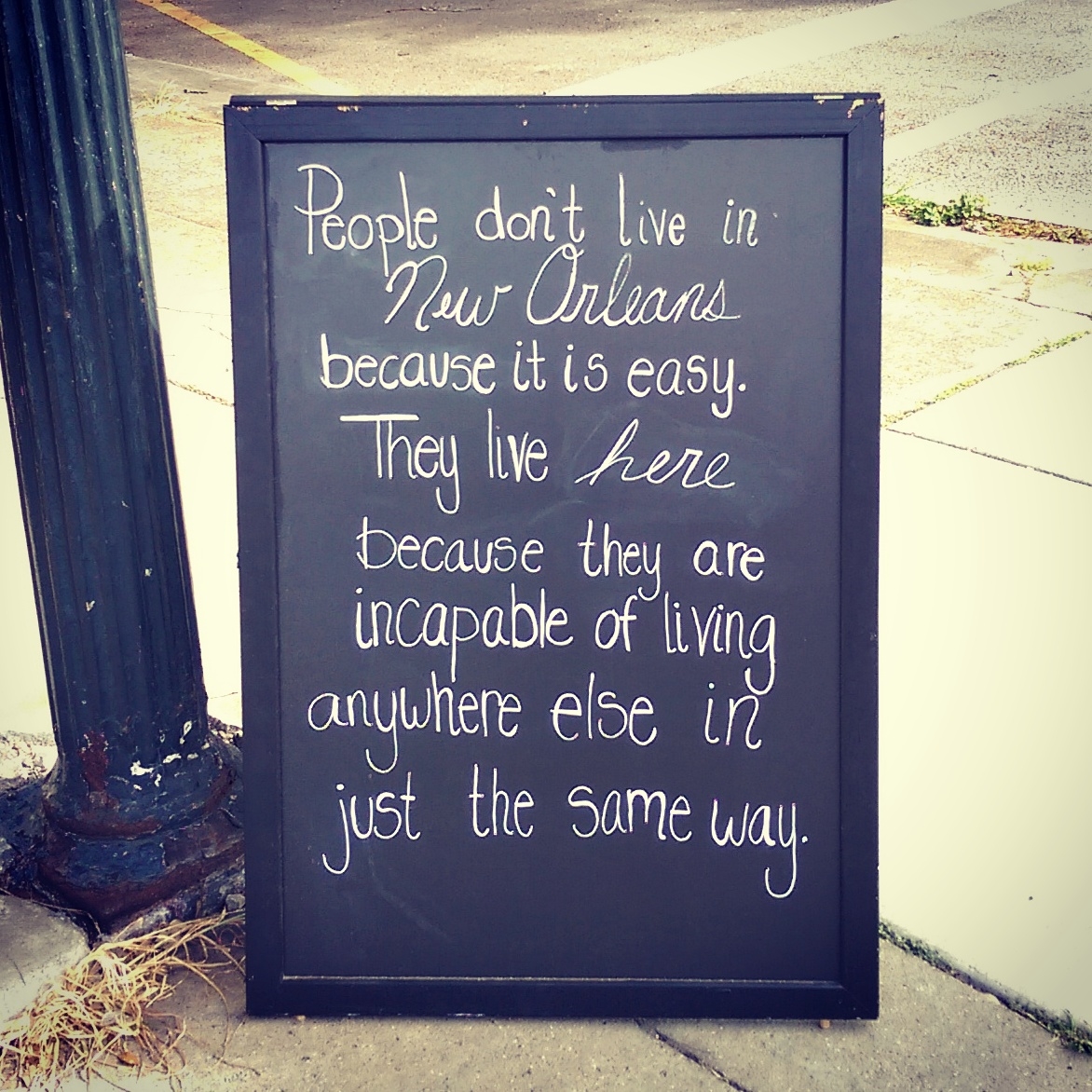 So this is a bit random…I wrote this post ages ago but never got round to finishing it. I totally forgot about it but then I was going through all the half-finished posts sitting in my drafts folder and realised this one was pretty much done! No idea why I didn’t post it before now, so I reckon what the hell. Just post it. So here it is!

This post follows on from my post on Nashville, which ended with my friend Cassie and I leaving Crema and jumping into our car and heading for Memphis. After a few fun-filled hours driving across Tennessee, singing Motown classics at the tops of our voices, shooting videos on our phones through the sun roof whilst navigating Highway 40 and laughing til we cried as we tried to piece the night before together, we arrived at Stax Records. 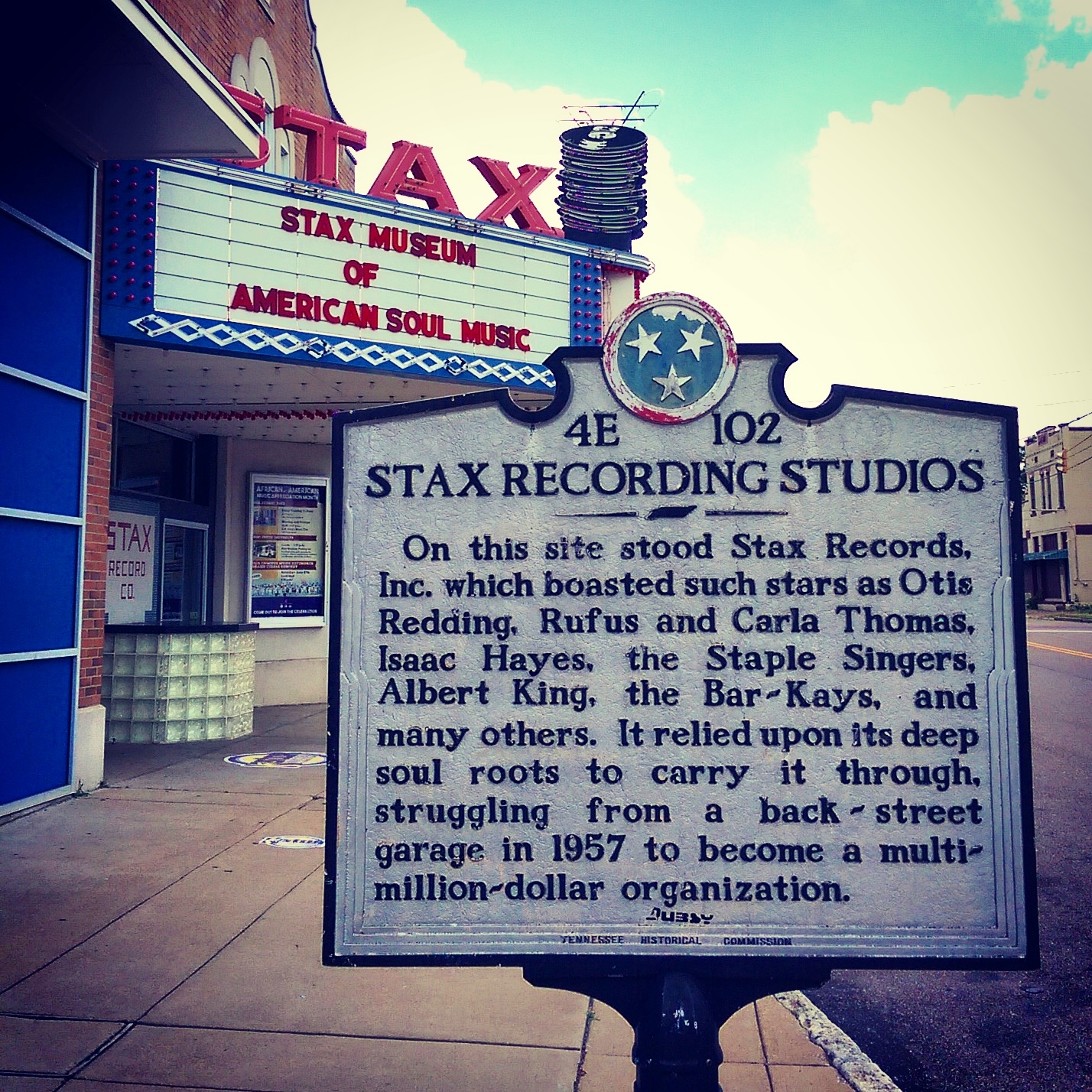 Before you can walk around the studios you are ushered into a room for a short film outlining the history of Stax. We sat down in front of a screen and the lights dimmed until the room was pitch dark and silent. Then, through the darkness, came that incredible voice… Oh, she may be weary, Young girls they do get weary… The room stayed dark for a few more seconds of the song which was just as well as I realised tears were rolling down my cheeks. Otis is my ultimate, and sitting there with his voice filling that dark room, a room he once hung out in, in the studio he recorded in, it was all a bit much for me. His voice makes my tummy flip and my knees turn to jelly at the best of times, but sitting where he recorded was an experience that’s hard to put into words.

After a rather emotional couple of hours at Stax, we drove down the road to Sun Studio, the Birthplace of Rock N’ Roll and home to the ‘Million Dollar Quartet’ – Elvis Presley, Johnny Cash, Jerry Lee Lewis and Carl Perkins. 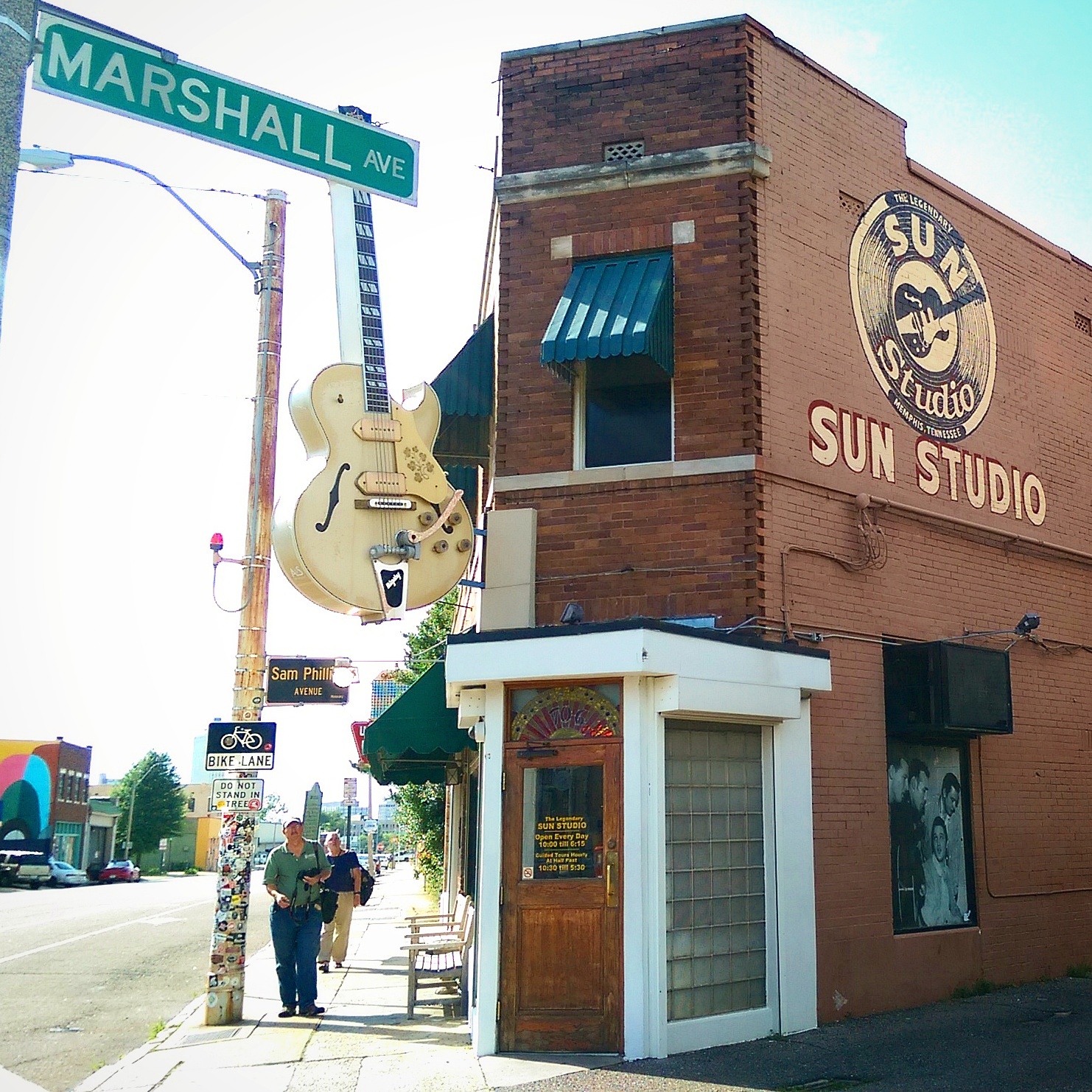 Again, this was really emotional. Its so hard to really take in that such amazing artists have stood where you are standing, creating music that the world still listens to and loves today. After walking around Sun Studios, hearing the stories and spending a small fortune on records, we drove to our fantastic Airbnb in Clarksdale, in the heart of the Mississippi Delta.

Cass and I spent the evening listening to our records then visited the Delta Blues Museum the next morning. After breakfast in a proper American diner, we drove and sang our way through Mississippi, just a little too fast. Blue lights, siren, heart palpitations, sweaty palms…these American traffic police are on it! The scary police officer turned out to be lovely once he saw the date on my driving license showed it was my birthday, and let us go with a warning.

We drove. And drove. And drove…it felt like we were never going to reach the Louisiana state line. My legs were getting twitchy and all I could think about was the Southern Fried Chicken I was going to get as soon as I got into Louisiana. A foodie friend had told me to find a Popeyes and that’s exactly what we did.  I can’t begin to tell you how happy we were when we saw this sign. 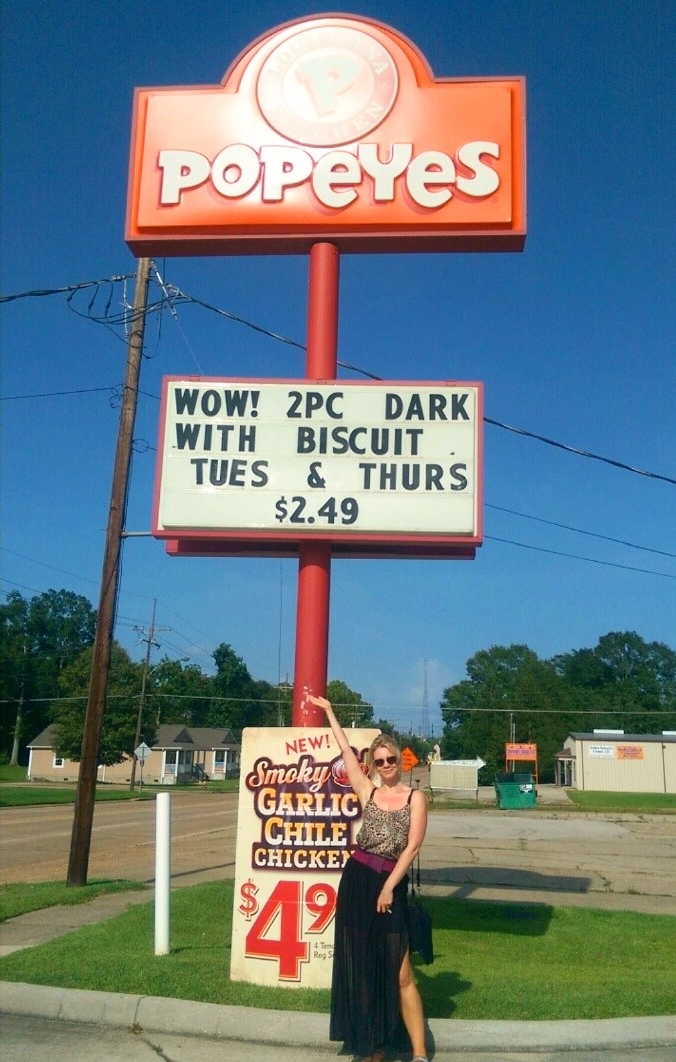 This was the first meat I was going to eat in six months and my God I was excited. I ordered two pieces of mild dark chicken with onion rings and coleslaw and it was divine. Cass ordered white meat and red beans with rice and green beans. 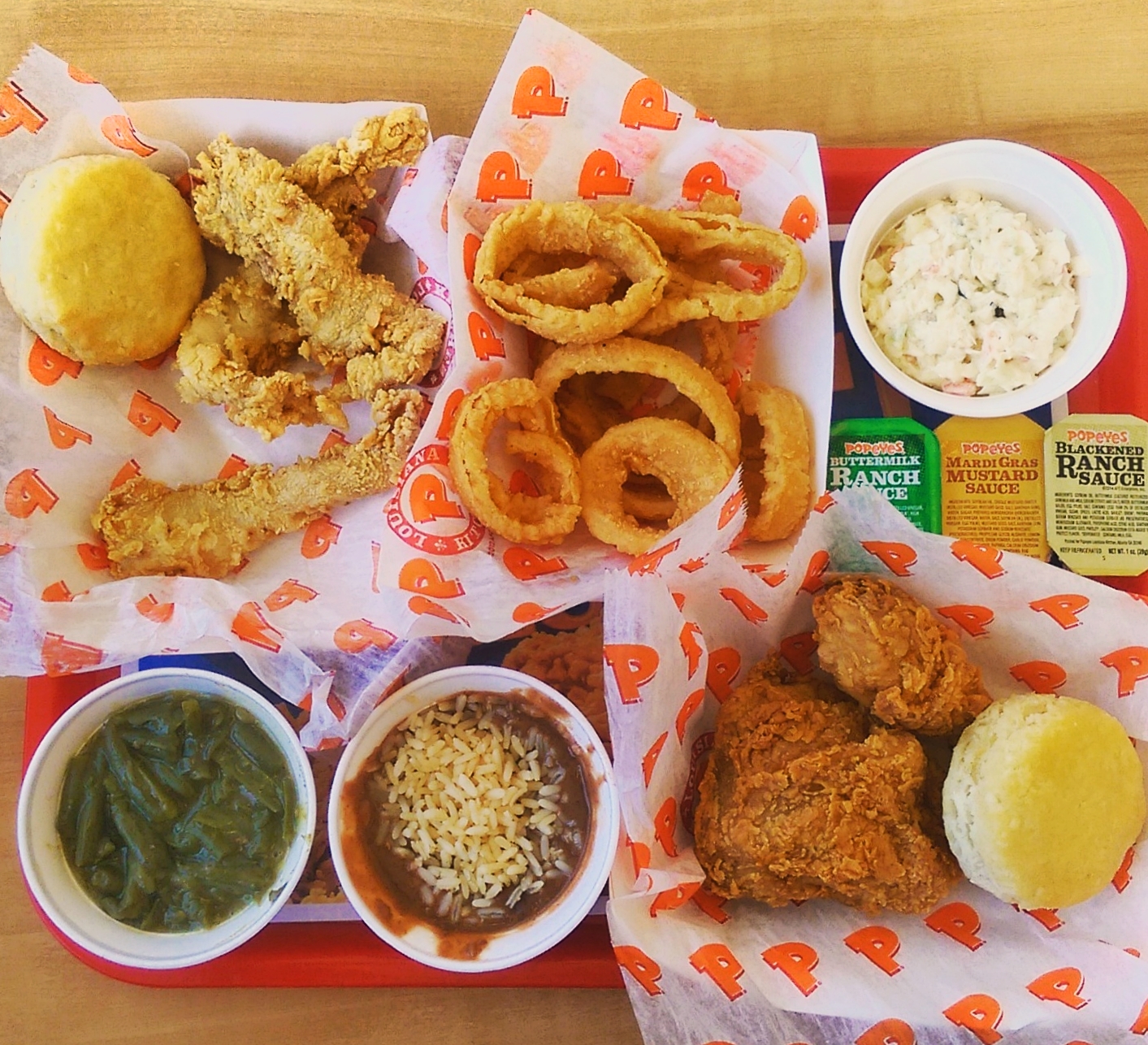 The chicken was fab. The coating was so crispy and well seasoned, the meat was moist and juicy. My God I’d missed chicken! Feeling fully recharged, we were ready for New Orleans.

Driving along the longest bridge in the world over Lake Ponchatrain, we saw New Orleans’ high rise buildings on the horizon, coming towards us like a mirage. We arrived on Esplanade in the French Quarter and met our fabulous Airbnb hosts, Chris and Brick who showed us around their fab apartment.

Wilting in the Louisiana humidity, we showered, changed and headed out to meet some friends. Walking through the streets of New Orleans is like an assault on the senses. There are so many people, so much noise, smells of food, lights everywhere, flags hanging down from the balconies above. The buildings are so beautiful and ornate, each one different from the one before, each with its own personality. It definitely doesn’t feel like you’re in America. This is the perfect city to let loose in. 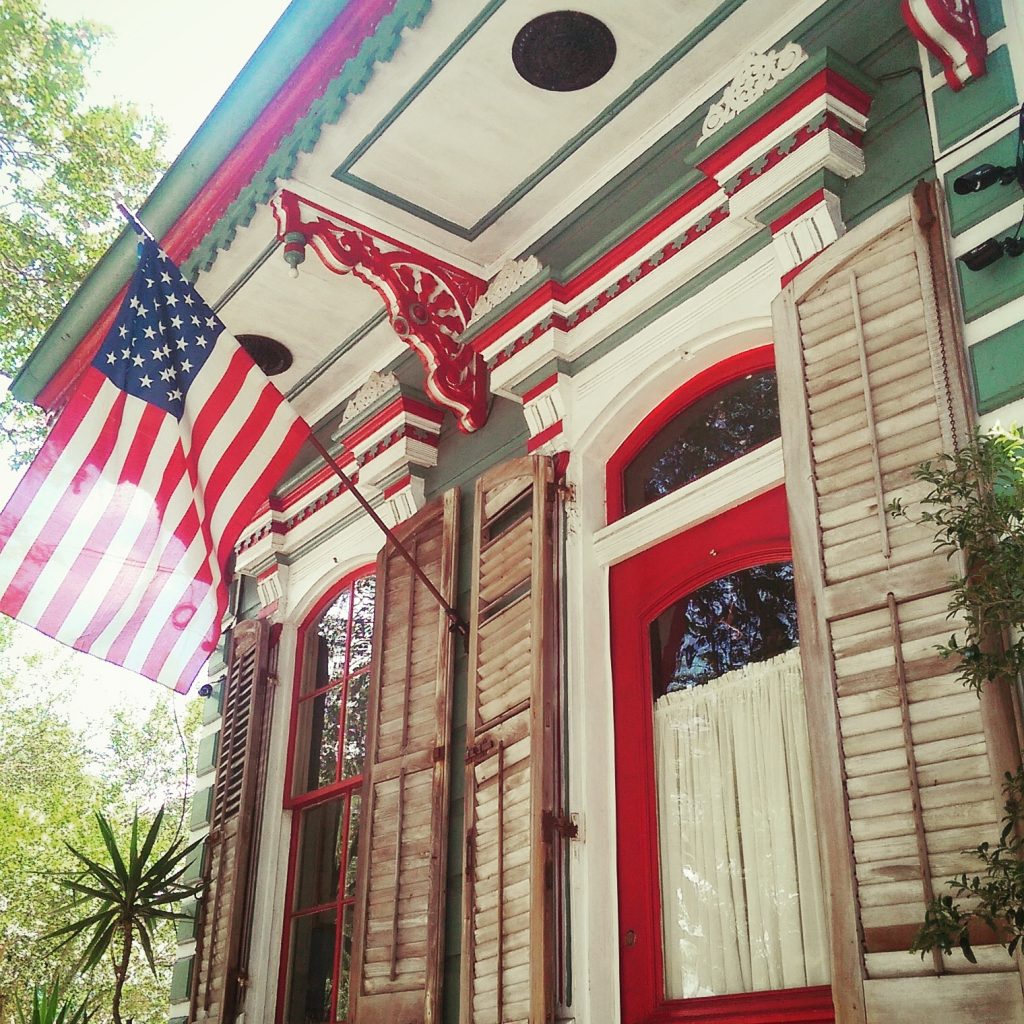 We ate at legendary NOLA restaurant, K-Paul’s Louisiana Kitchen. After working our way through a basket of the most incredible bread and buns warm from the oven, I had half an artichoke stuffed with huge king prawns in a dill dressing, followed by the house specialty, blackened Louisiana Drum with chipotle butter and mash.

The next morning Cassie and headed to The Old Coffeepot for breakfast, on the recommendation of our Airbnb hosts Chris and Brick. They had told us we had to order the Callas Cakes…deep fried rice cakes with pecans, topped with a mound of icing sugar. Alongside the Cassas Cakes, Cass ordered grits and Creole eggs and I got the French toast. But this was no ordinary French toast, this was DEEP FRIED French toast topped with icing sugar, streaky bacon and maple syrup! 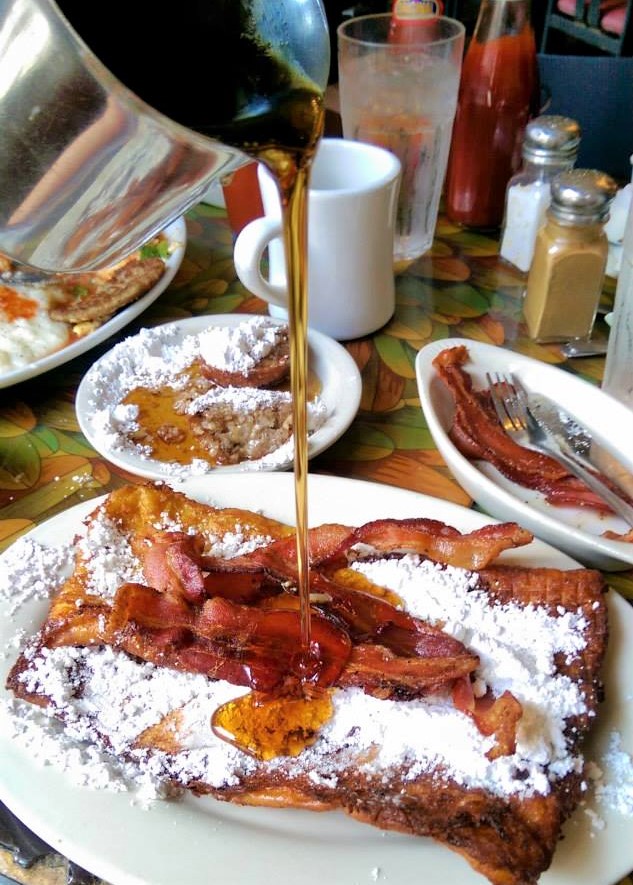 By the end of our meal we were stuffed, yet bouncing off the walls with all that sugar in our system. We took our Bloody Mary’s to go (you can walk around the streets drinking alcohol in New Orleans), then wandered around, listening to the constant sounds of jazz being played on every other street.

So much went on in New Orleans, I can’t mention everything but one meal I have to mention is the best sandwich I think I have ever eaten. Again, on the recommendation of our friends Chris and Brick, who gave us directions to a convenience store just a short walk from their house. As Cassie and I walked down the road, round the corner and down a bir further, we started slowing down, certain that we had taken a wrong turn somewhere. We saw a convenience store on a corner, but this is not somewhere where you would think anything good could come from. We hesitantly walked passed a dude peeing against the wall outside and entered the shop. We looked at each other and nearly turned round, but then we noticed a hive of activity at the back of the shop. 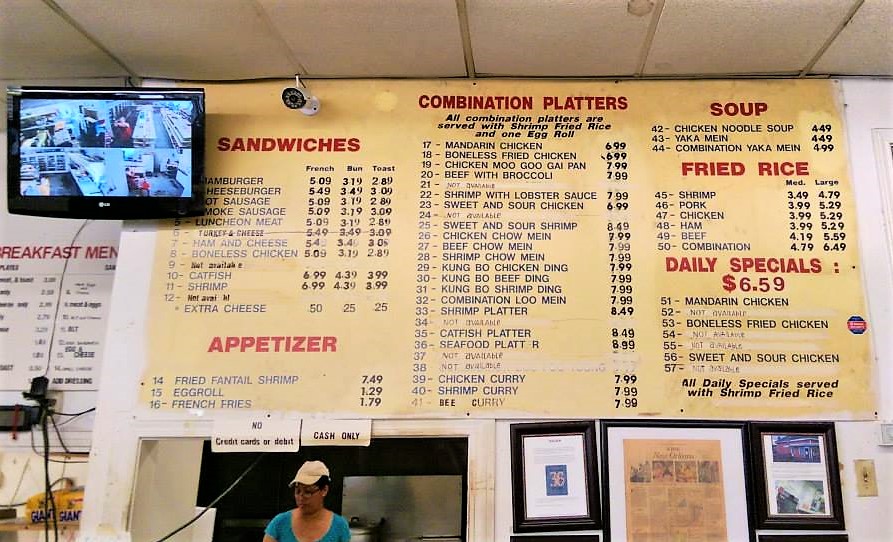 Turns out this was the place to be! I ordered a deep-fried shrimp po’ boy and it was one of the best things I have ever eaten. Bite through that crispy coating, and you get the most intensely sweet, juicy prawns, and they were huge! The bread looks like a baguette but it was way softer. The combination of the soft bread, the crispy, juicy prawns, the crispy shredded lettuce and the proper full-fat mayo just made this the most glorious sandwich I’ve ever experienced. I genuinely thought I wouldn’t be able to finish it but my God, I inhaled that bad boy. 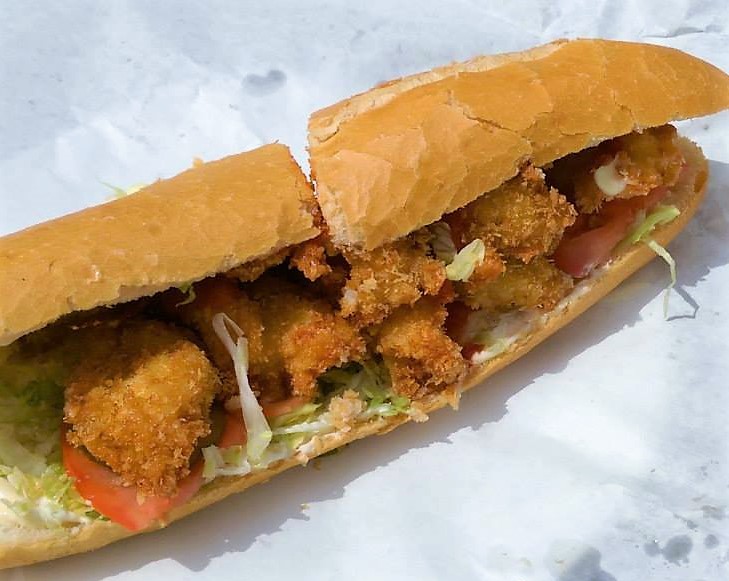 The next day, I needed another po’ boy fix so we popped into Mahony’s Po-Boys on Magazine Street. 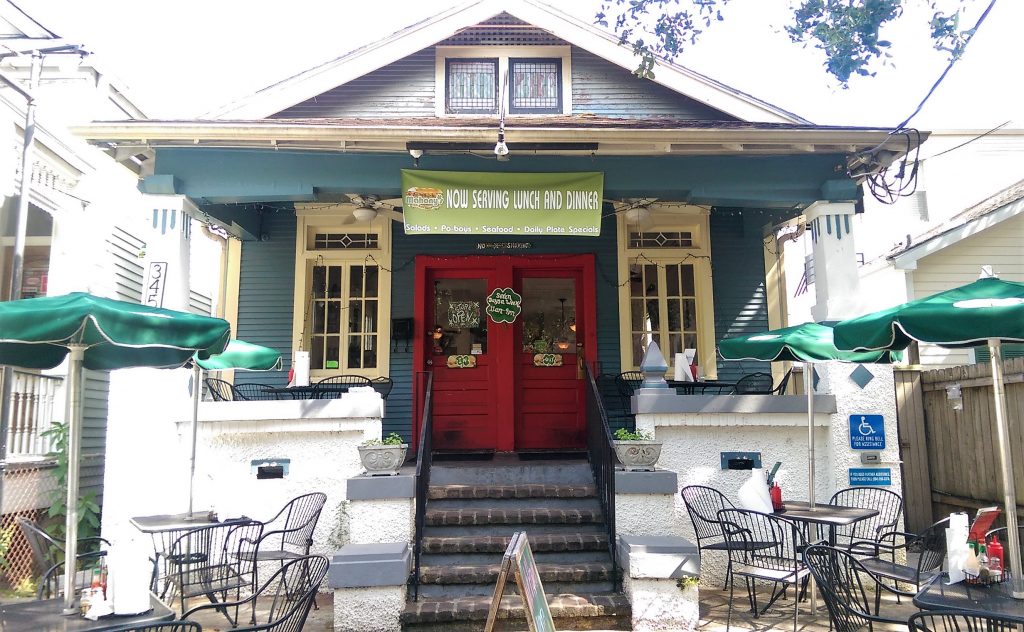 This time I got an eggplant parmesan po’ boy with the most incredible onion rings. They had been shredded then lightly battered with buttermilk then flash fried. I was in heaven.

Other foodie highlights included a fabulous night at Sylvain in the French Quarter. Unfortunately, or rather, fortunately we sat outside in amongst candles and fairy lights while we ate, so I didn’t get any decent photos of the food itself, but it was wonderful. It was the first time I’d tried a shaved brussels sprout salad, and this one came with apples, pecorino and hazelnuts. It was stunning. As were these pan-seared scallops with Israeli couscous, lima beans, fennel citrus salad and hazelnut brown butter. 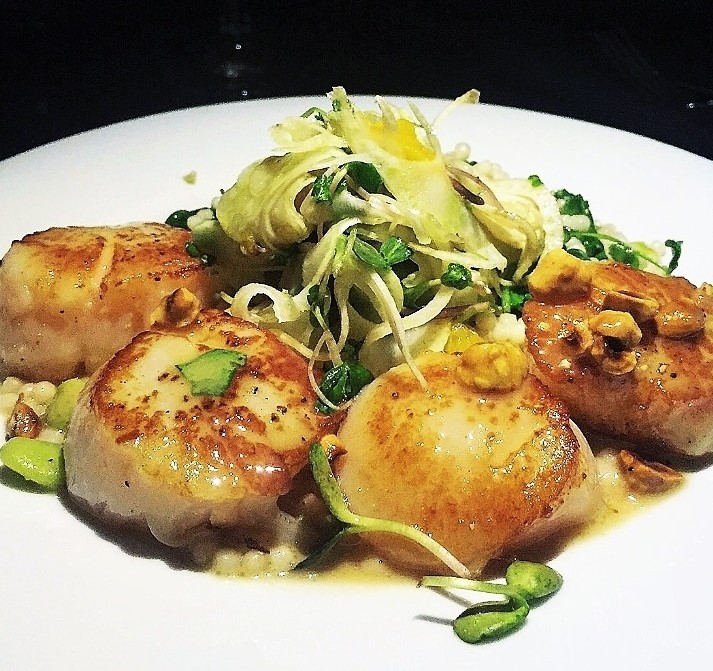 Chris and Brick also recommended Faubourg Wines, a retail wine shop and wine bar in the Marigny/Bywater area which specialises in high quality, small production wines from around the world. We all had a fantastic evening there devouring cheese and drinking wine.

One morning, Cassie and I drove to the Lower Ninth Ward, the neighborhood devastated by Hurricane Katrina. After visiting the fascinating and emotional Living Museum, we drove around the neighbourhood. One of the first things we noticed was the many empty lots on the streets. Instead of houses, these lots hold just grass and weeds. After Katrina, only about 37% of households returned to this once-vibrant neighbourhood, which had a population of about 14,000 in 2000.

It was so hot, we decided to pop into the first convenience store we saw for a drink. Then we realised there was literally only one store, the Lower 9th Ward Market… 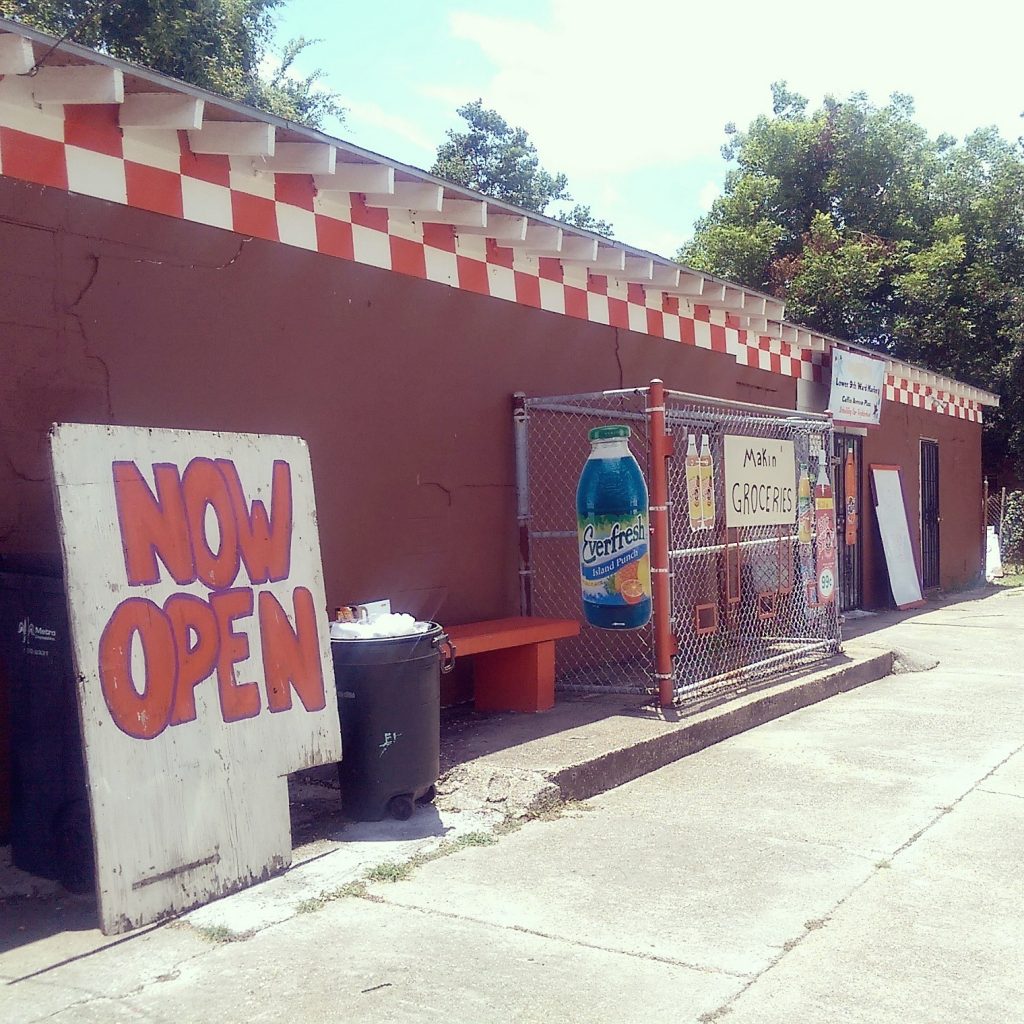 The smiliest, loveliest man approached us to welcome us to his store and show us around. That man was Burnell Cotlon. 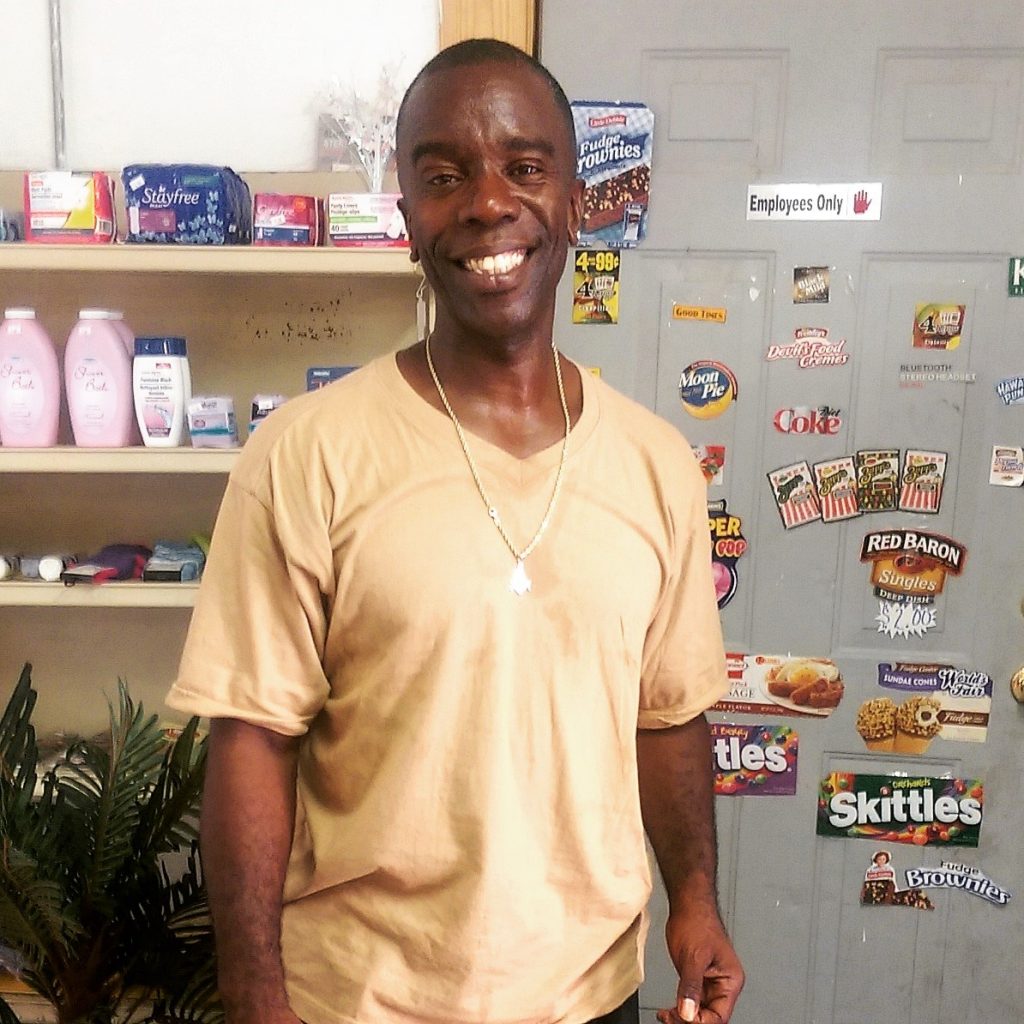 Burnell explained that when he returned to the neighbourhood he grew up in after Katrina, the only other full service grocery store was in the next city. Locals had to catch three buses to get there. This broke his heart so he decided to open us his own store using his own life savings. He keeps prices low so everybody can afford to shop there and he gets his kicks from seeing the smiles on customers faces. Burnell proudly brought out his photo album to show us what the building looked like when he bought it, and every step of the renovation to get it to where it is today. Meeting him was the highlight of our trip. Standing in front of us was a man who saw his home wiped out, only to return and plough everything he had left back into the area to help his neighbours. After everything he has been through, I never met anyone happier or more positive in my life.

We left New Orleans with a heavy heart, but determined to return, then began our nine hour drive to Athens, Georgia. This is where we discovered fried chicken with waffles and syrup. Wow! Revelationary. So good I had it for dinner, then again for breakfast the next morning at FIVE. 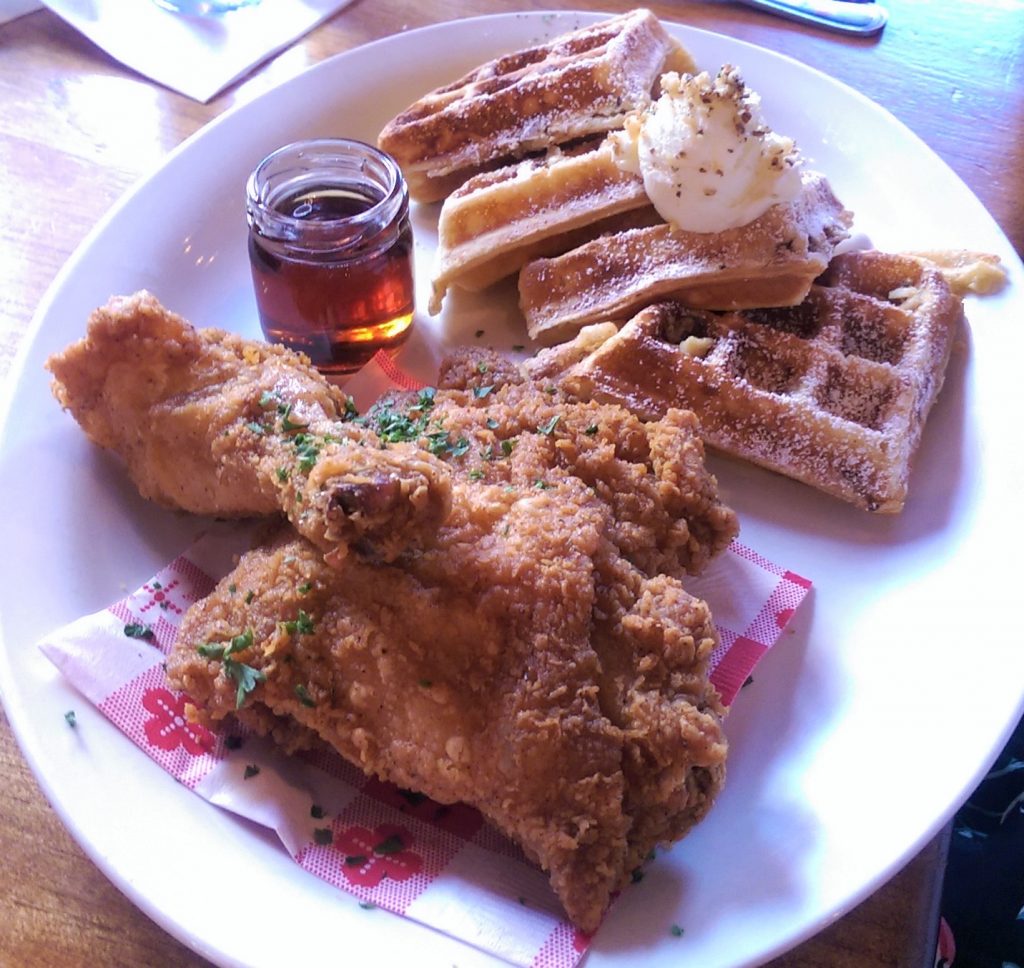 As soon as I got back to London the first thing I did was google where I could get fried chicken and waffles and although there were a few places, the best by far was Ma’ Plucker on Beak Street in Soho.

On our last evening, Cassie and I sat on a swing chair out on the deck of our AirBnB, drinking wine and taking in the last couple of weeks. We desperately didn’t want to leave but sooner or later we all have to return to real life. 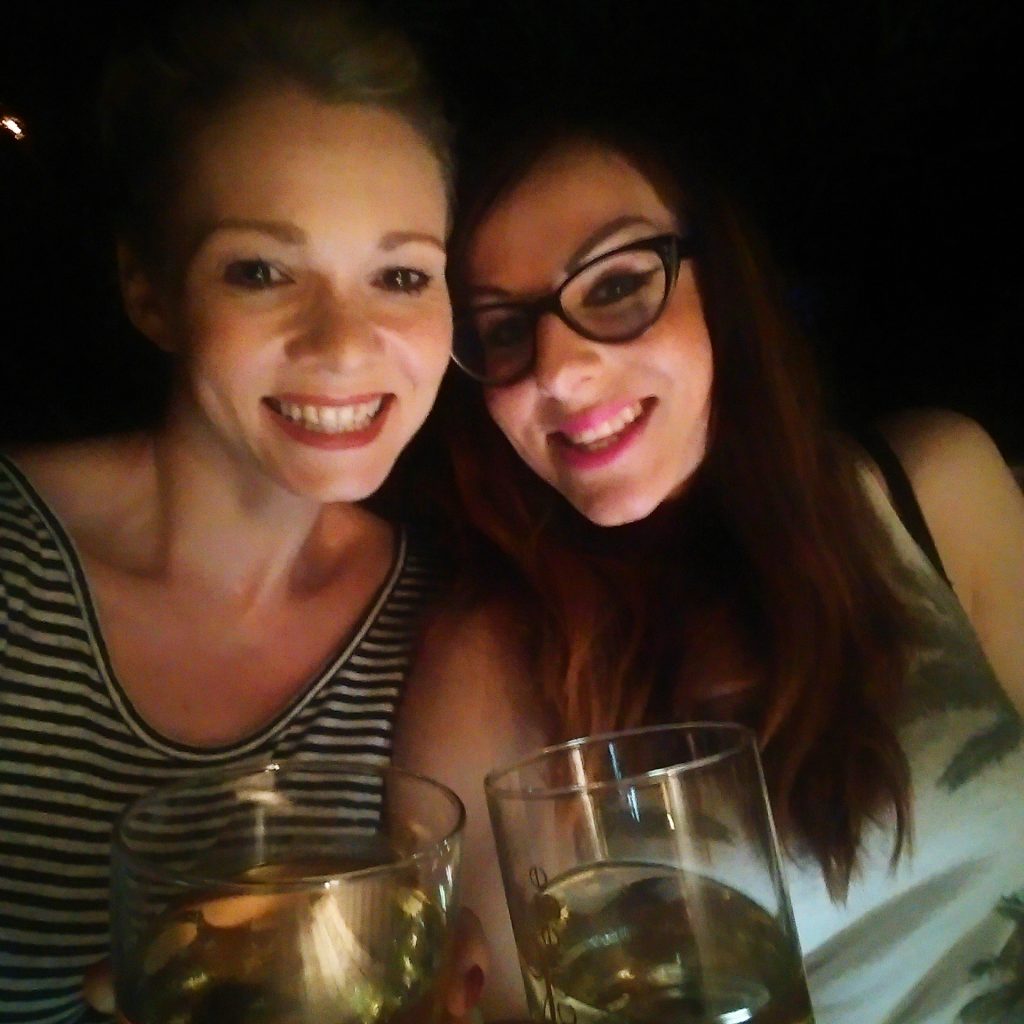 And so our trip of a lifetime had come to an end. Cassie and I laughed non stop, ate amazingly well, discovered the best doughtnut we’d ever tasted (Nashville), had one of the best nights out dancing (also Nashville), got pulled over by the police for speeding whilst dancing to Proud Mary (Mississippi), cried listening to Otis Redding (Memphis) and had the honour of meeting some of the loveliest people. I want to go back and do it all again, but this time take everybody I love back with me so they can also experience the magic of America’s South.