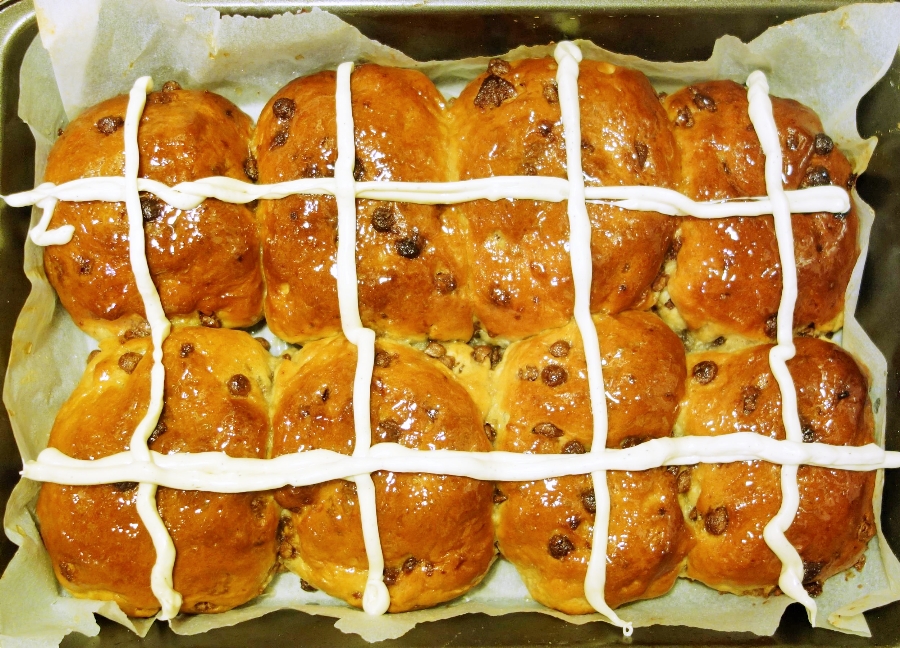 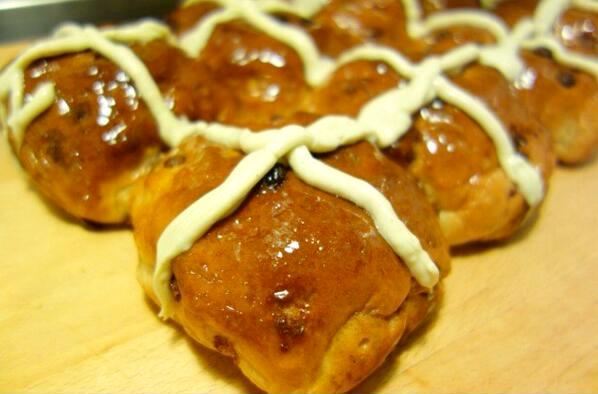 Easter is fast approaching and I do love a holiday that is heavily based around food, especially when that food is cake and chocolate. Hot cross buns are synonymous with Easter but I must admit I’m not a fan of the traditional ones. I don’t like dried fruits so a spiced bun full of dried fruit and peel does nothing for me. I wanted to make hot cross buns that I would want to eat so I decided to replace the dried fruits with chocolate and for the spice aspect I thought cinnamon would be nice, with a touch of nutmeg. Then, seeing as I love Chocolate Orange, I thought I could add some Chocolate Orange chunks and a little orange zest to make Chocolate Orange Hot Cross Buns. And finish off with some white chocolate crosses to make them look like traditional hot cross buns.

I looked online for a recipe but nothing jumped out at me. Then I came across this recipe for Cinnamon Chocolate Chip Hot Cross Buns by Not Quite Nigella, a food blogger and writer based in Sydney. Her recipe looked very straightforward so I took the basic elements of that and then adapted it into what I was looking to make. Luckily, it turned out really well. The buns were soft and light with just the right hint of spice and orange through them, and of course, the chocolate gave it the wow factor.

For the crosses
50g white chocolate

In a small bowl, combine the lukewarm milk, caster sugar and dry yeast then set aside for 15 minutes. It should become frothy and increase in volume. 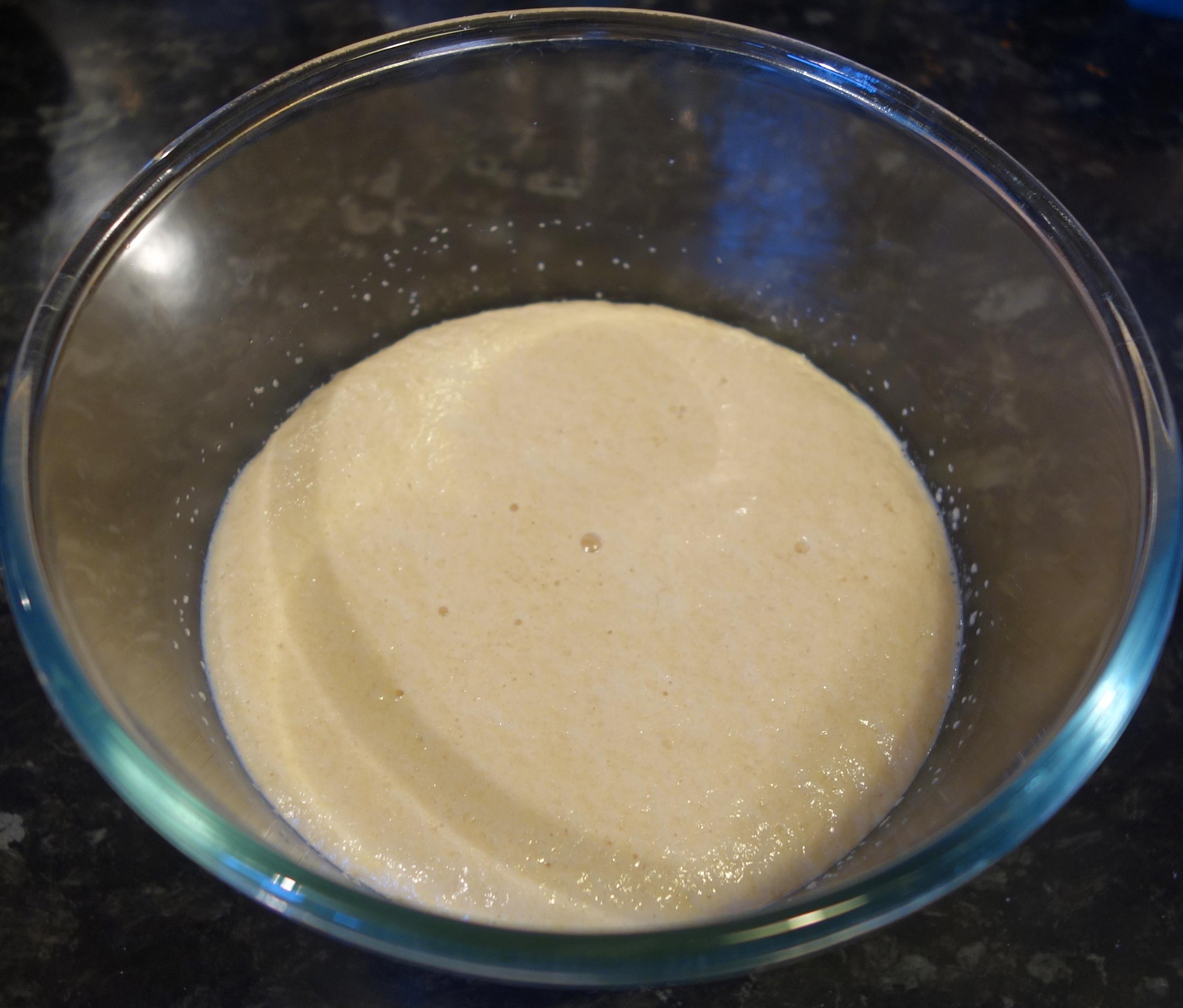 If you have a mixer with a dough hook, place the flour, salt, cinnamon and freshly grated nutmeg in the bowl of your mixer. Make a well in the centre of the flour and pour in the melted butter, lightly beaten egg and frothy yeast mixture, as well as half the chocolate chips. 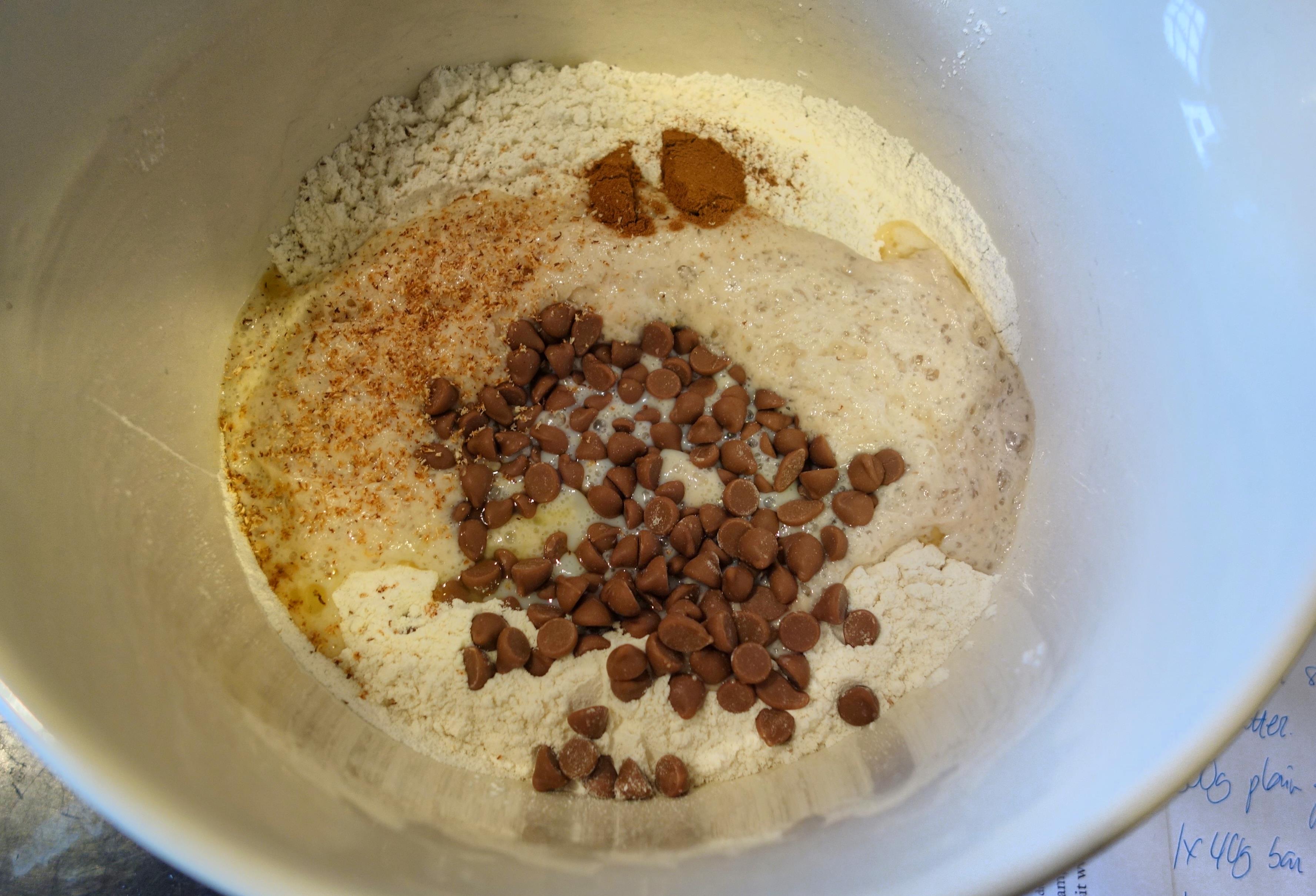 Turn the mixer on low and knead for about 5 minutes. If you don’t have a mixer or a dough hook, just place the ingredients in a mixing bowl and mix with your hands until you have a soft, sticky dough. 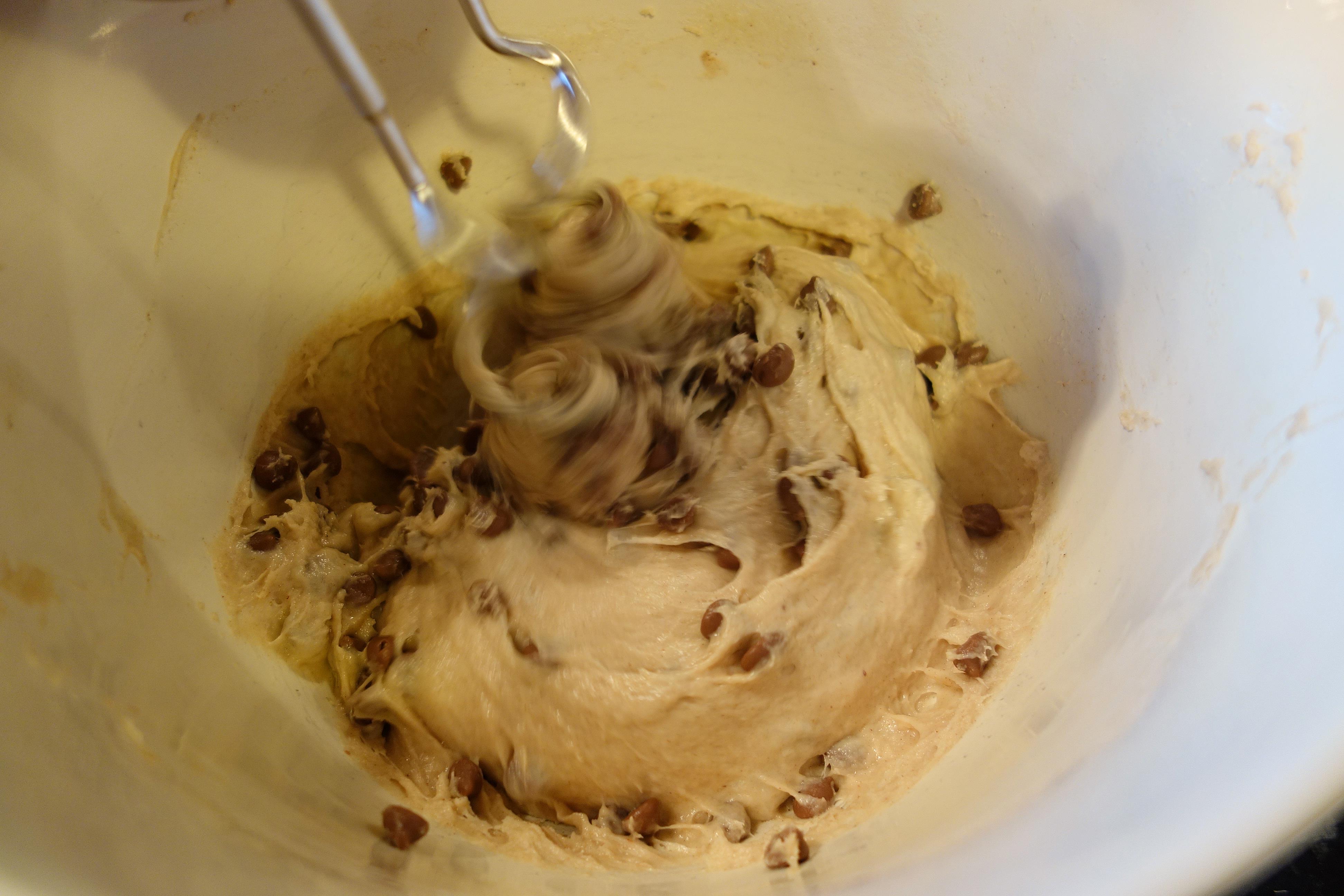 Place the mixture in the largest mixing bowl you have and cover with lightly oiled cling film. 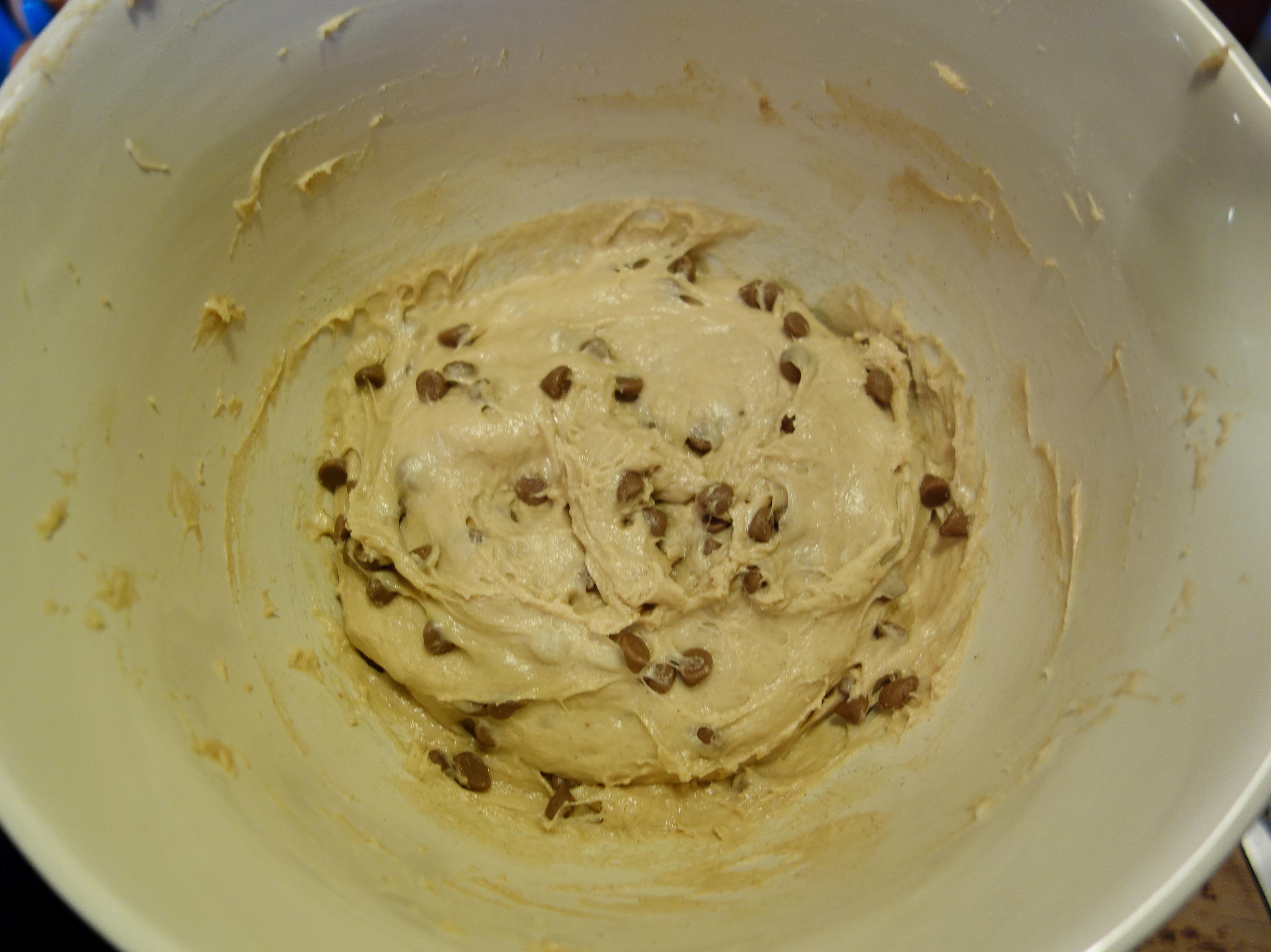 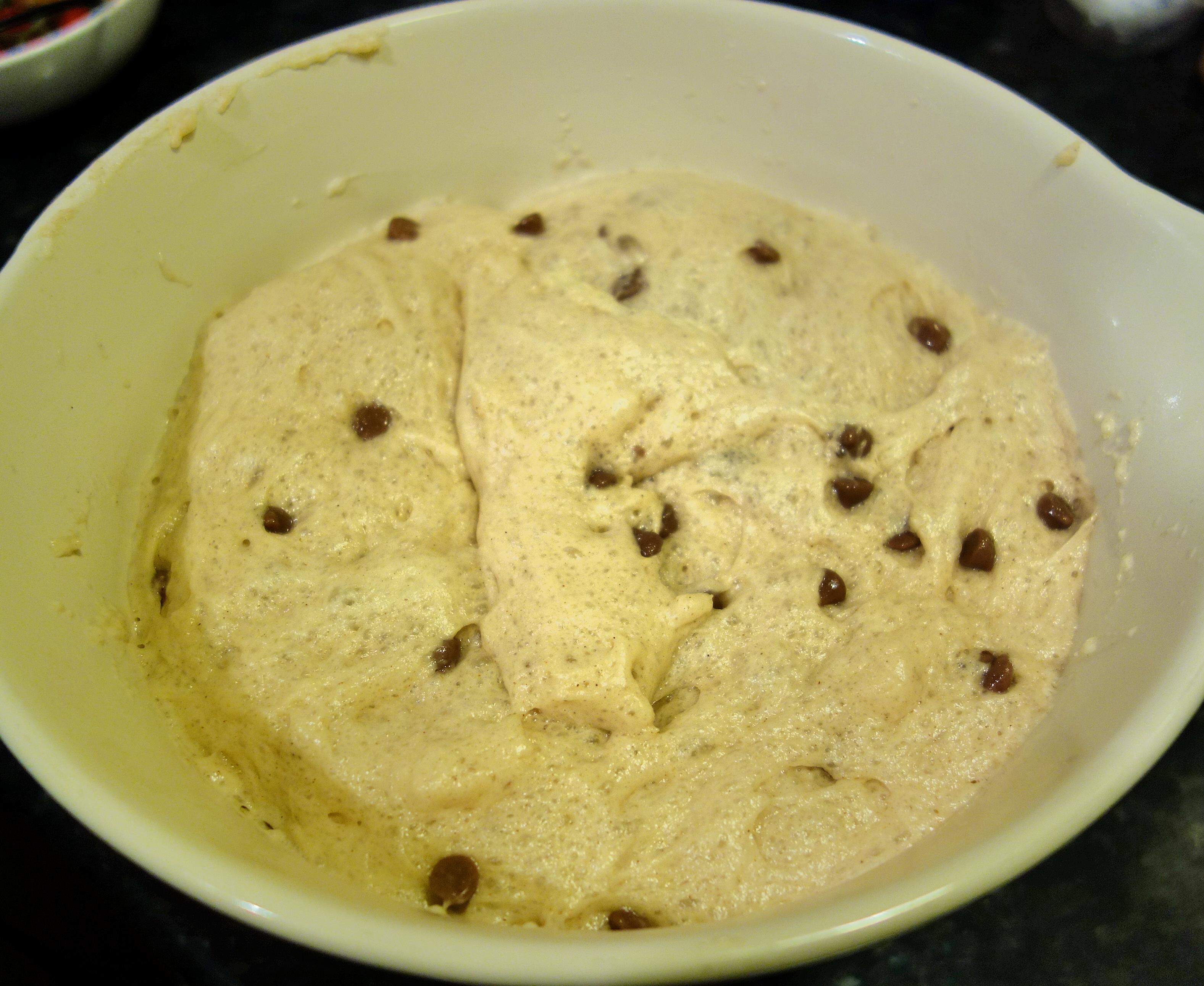 Once the dough has risen, knock it back (knock the air out of it) add the Chocolate Orange chips and the orange zest and mix lightly until everything is incorporated. 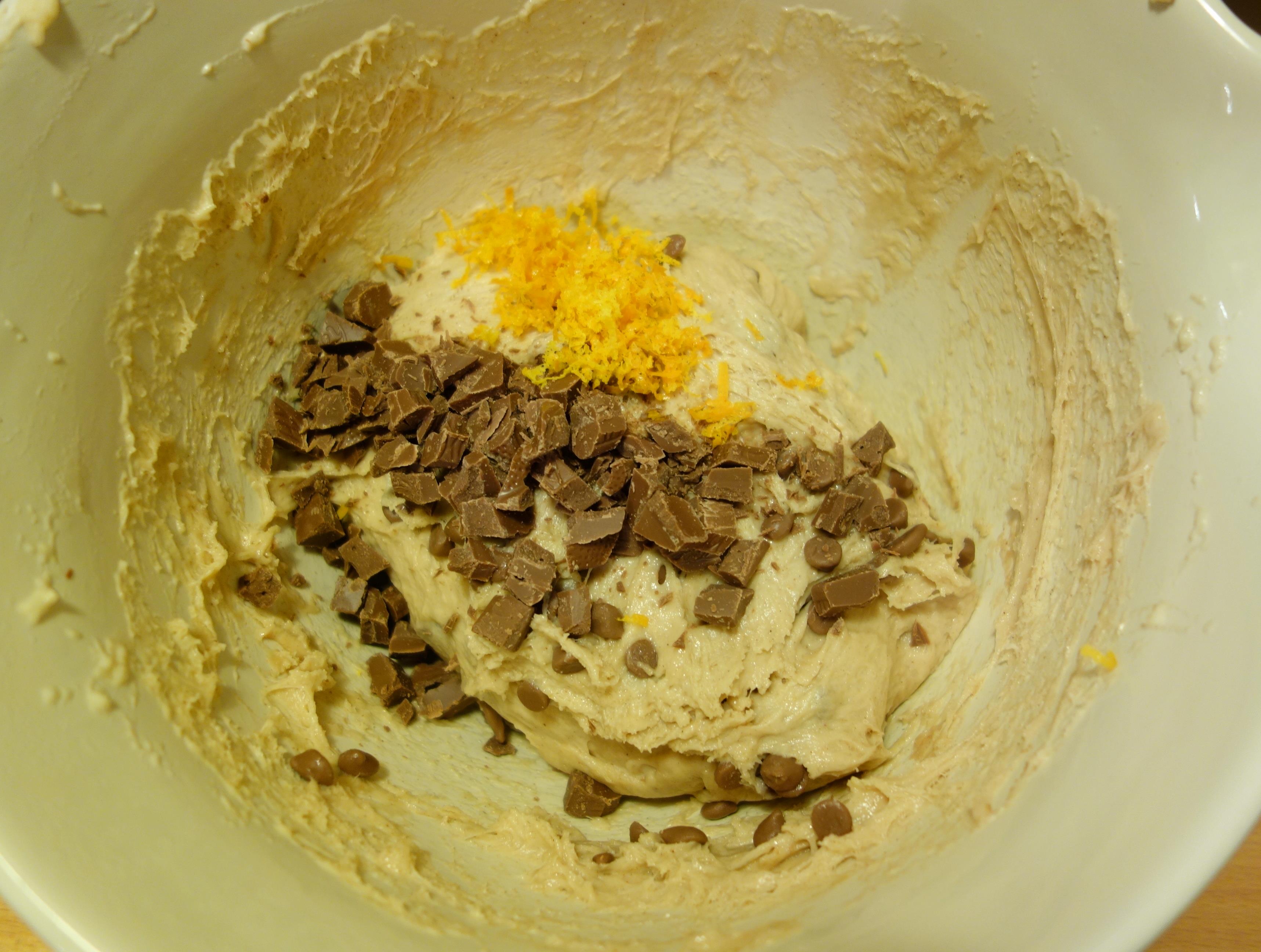 Divide the dough evenly into 8 balls and place them close together on a baking tray, lined with parchment/greaseproof paper. (When I did these ones I didn’t realise how much bigger they would get and ended up with huge buns! I’ve since made them again and made them smaller and got 12 buns out of the mixture.) 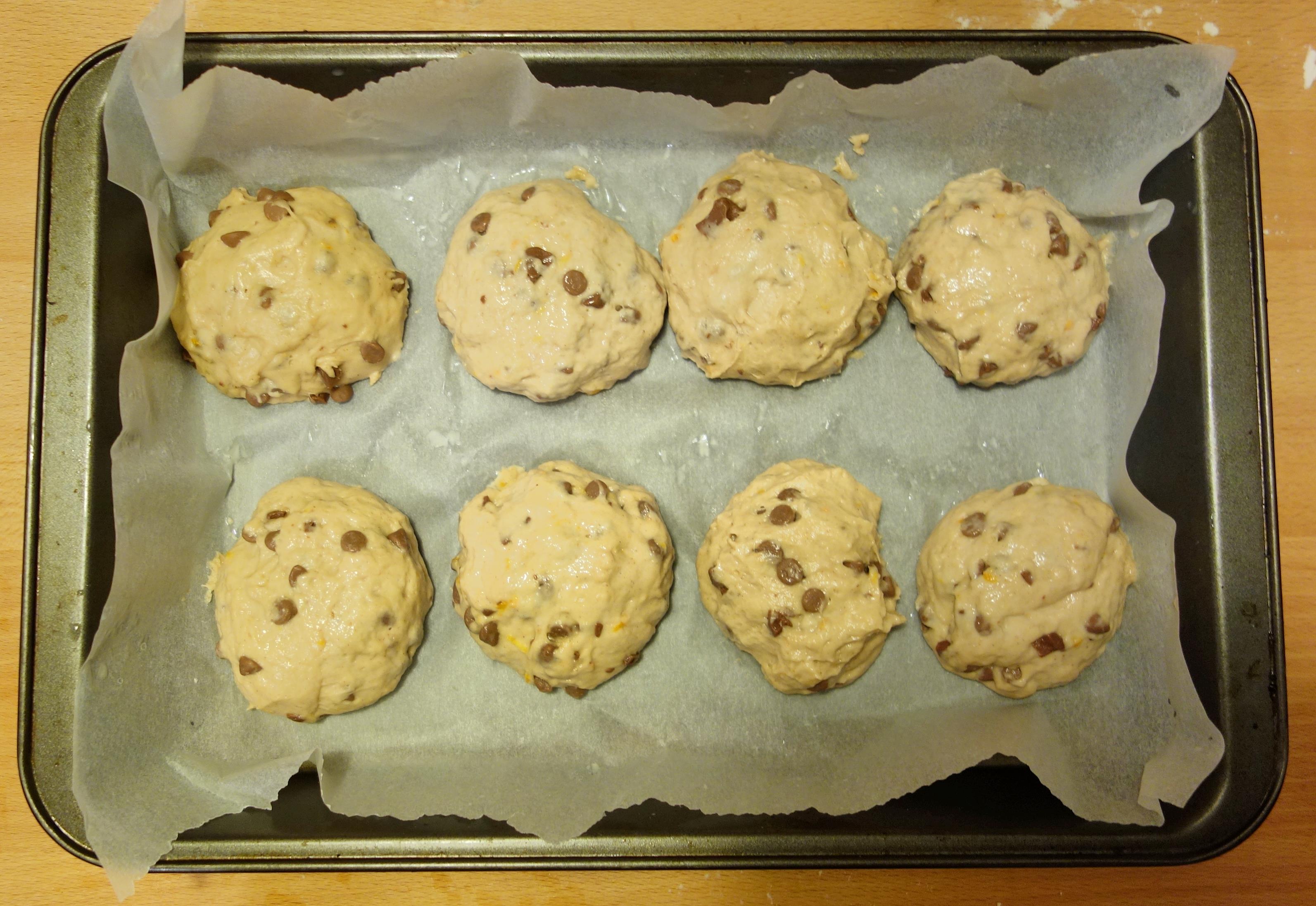 Cover the hot cross buns with cling film and set aside somewhere warm to rise for 20 minutes. At this time, preheat your oven to 200C/180C fan/400F/Gas 6.

After 20 minutes you will notice your buns have increased in size. 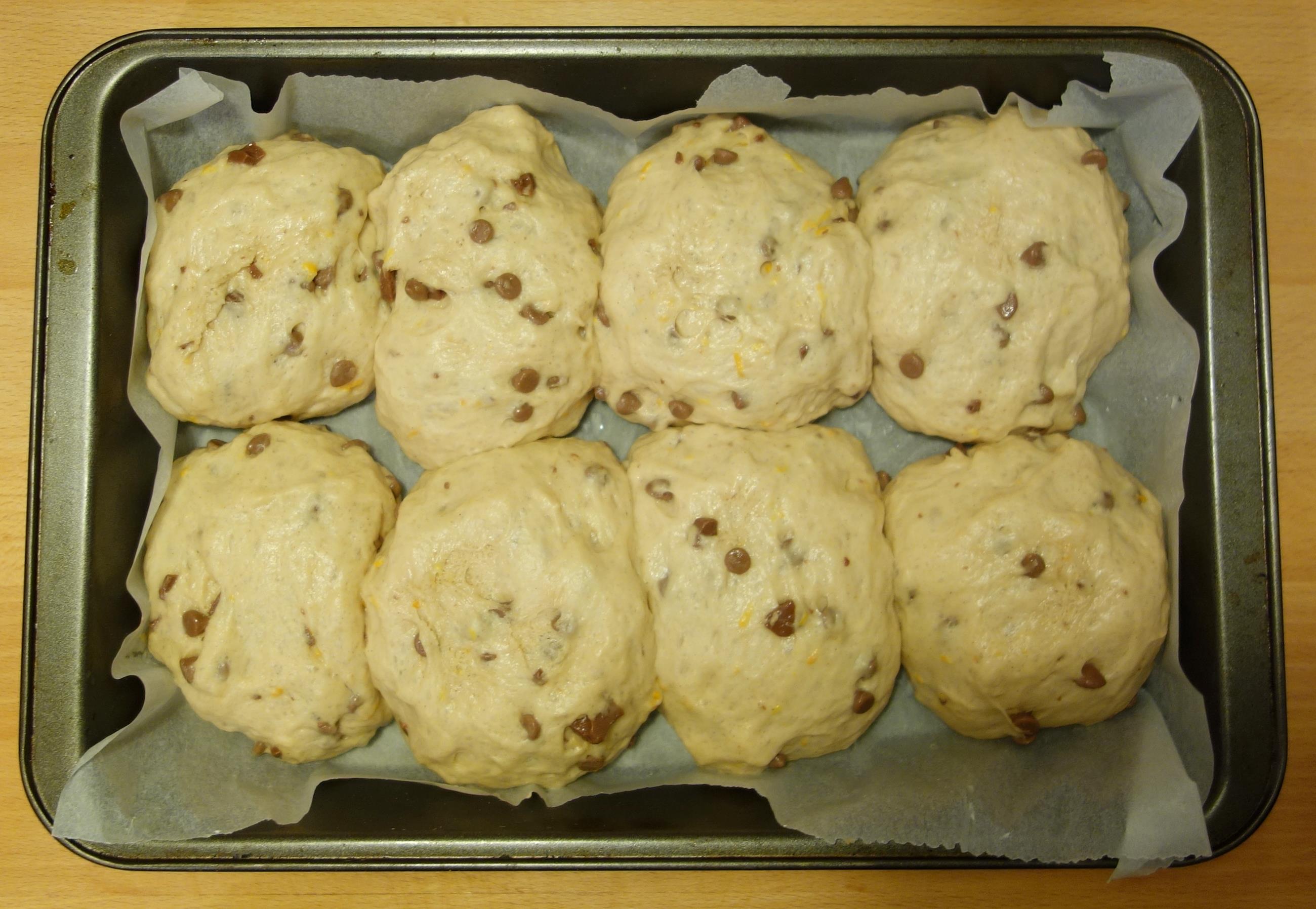 Remove the cling film, place the baking tray in the oven and bake for 20-25 minutes, until the buns are golden brown and fragrant. 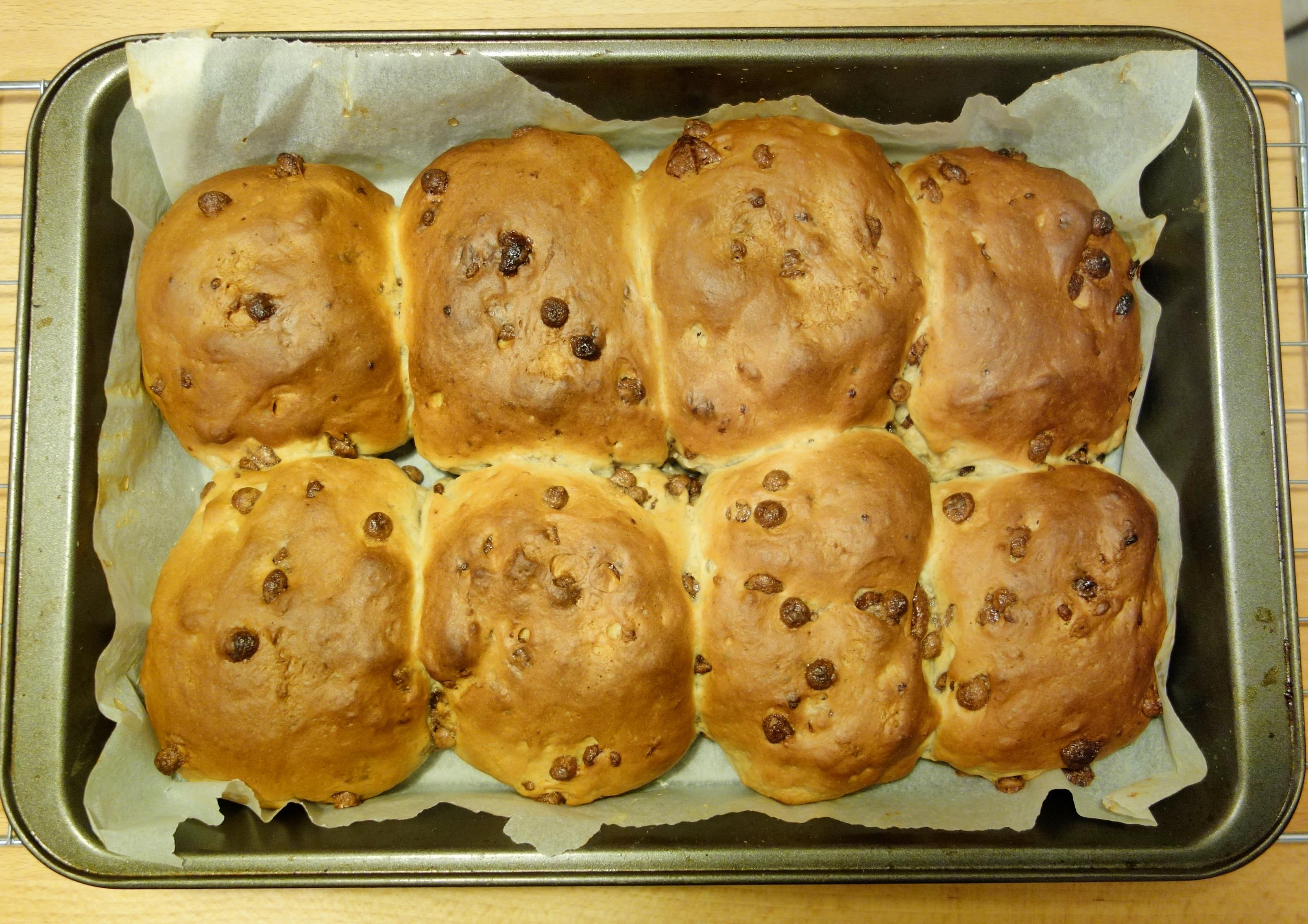 You now want to make the glaze so dissolve the sugar in the hot water and brush the hot buns with a few coats of the glaze. 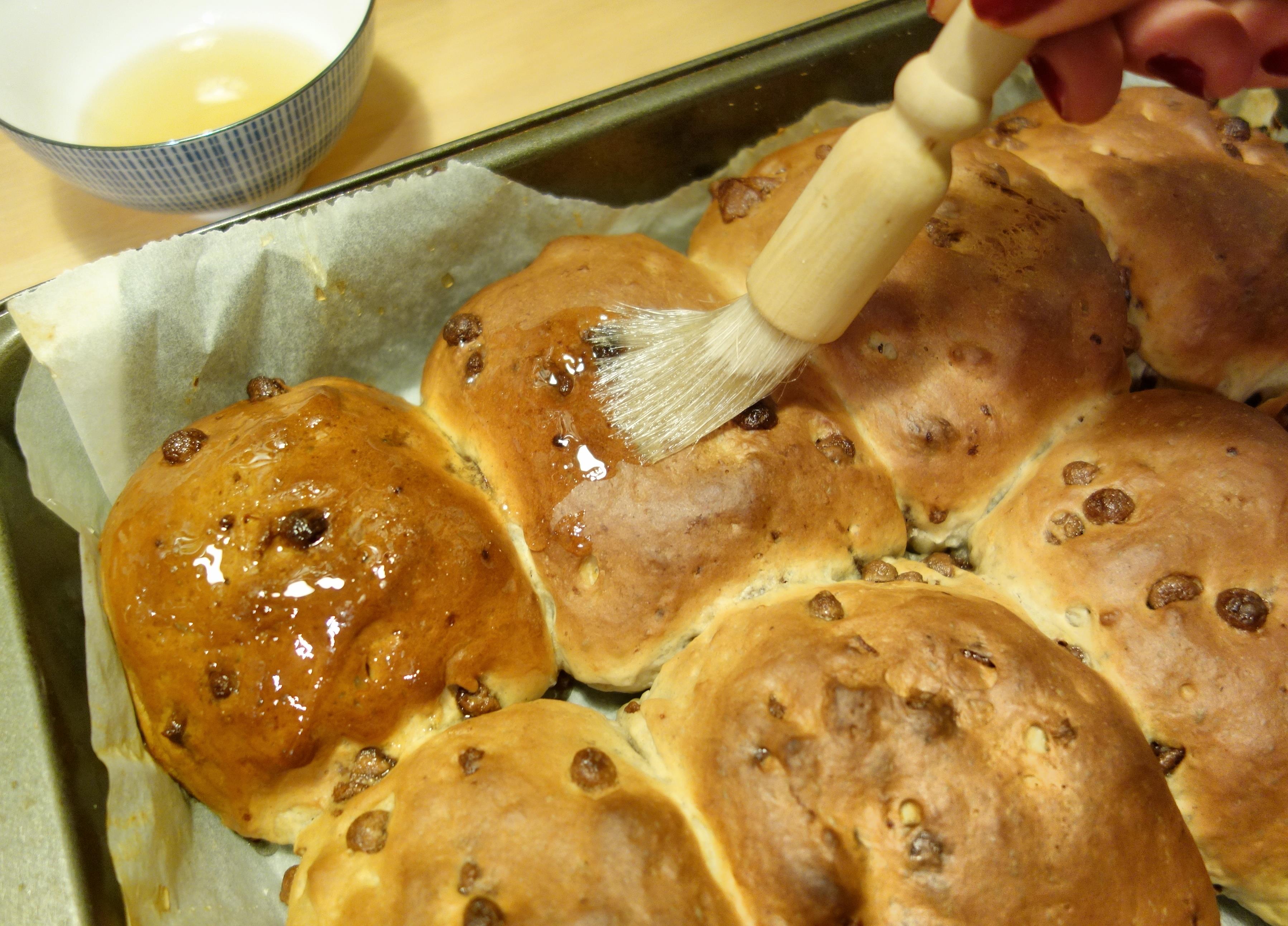 To make the crosses, melt the white chocolate in a bowl over a saucepan filled with a couple of inches of barely simmering water, making sure the base of the bowl doesn’t touch the water. Keep the heat at its lowest, allowing the chocolate to melt slowly. (White chocolate is different to plain and milk chocolate as it contains no cocoa solids. It is therefore much more likely to ‘seize’ and turn lumpy or grainy when melting. It also scorches very easily, so keep an eye on it).  Alternatively you could microwave it in short bursts, stirring in between.

Once melted, put the chocolate into a piping bag and pipe crosses across the chocolate chip buns. (As you can see, I’m not great at piping, I’m sure yours could look a bit neater and straighter than mine!) 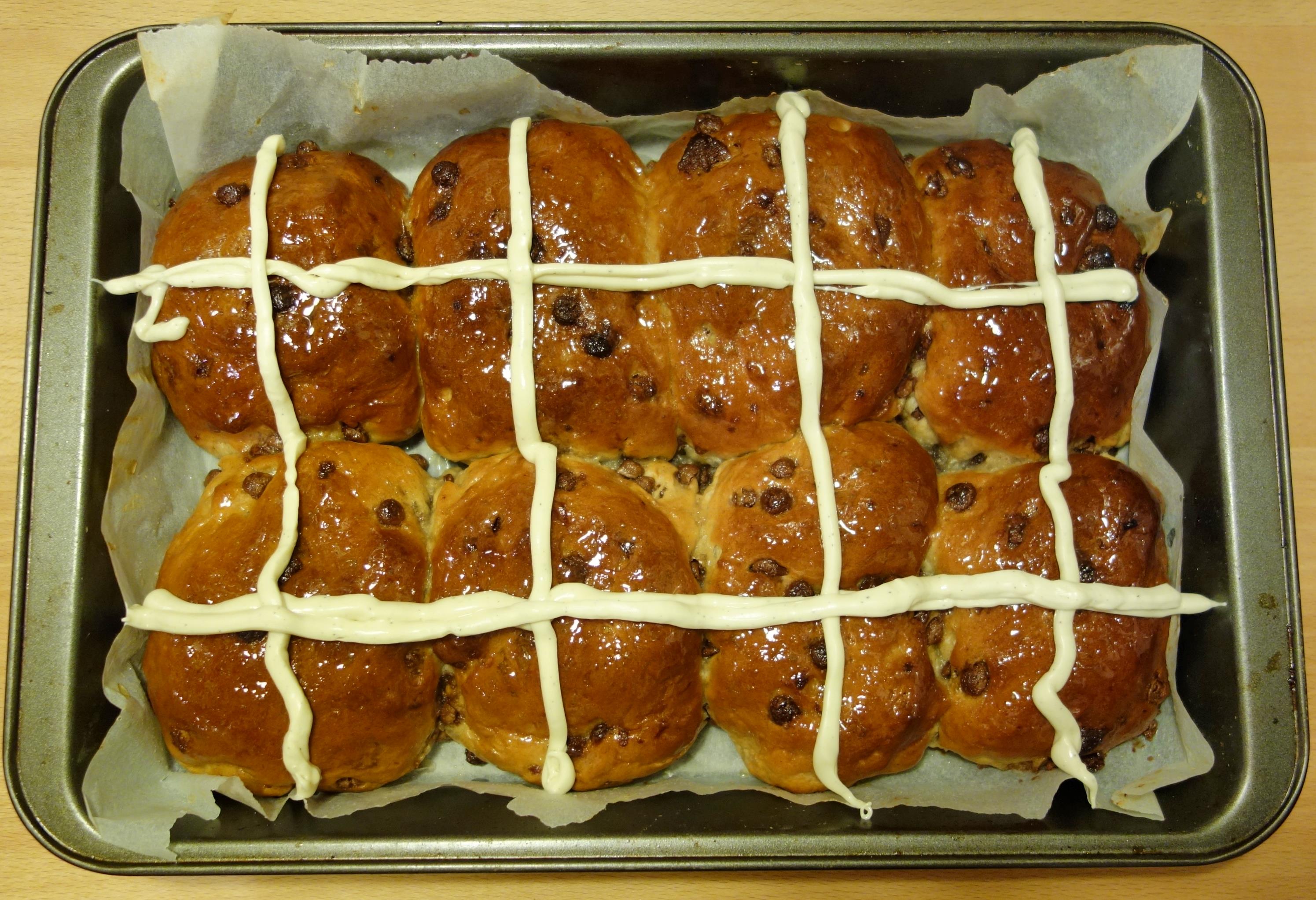 And there you have it…chocolate orange hot cross buns! I was really pleased with how these turned out and I will definitely be making them again over the Easter weekend. They are so delicious hot out of the oven. The bun itself is sweet, with a lovely hint of cinnamon and orange in the background, made even better with the chocolate chunks melting inside.

I took some into my office for my colleagues to try and they worked really well the next day, toasted. I think the next time I would use the same measurements but make the buns half the size as they are pretty big at the current size. But its whatever you prefer obviously. 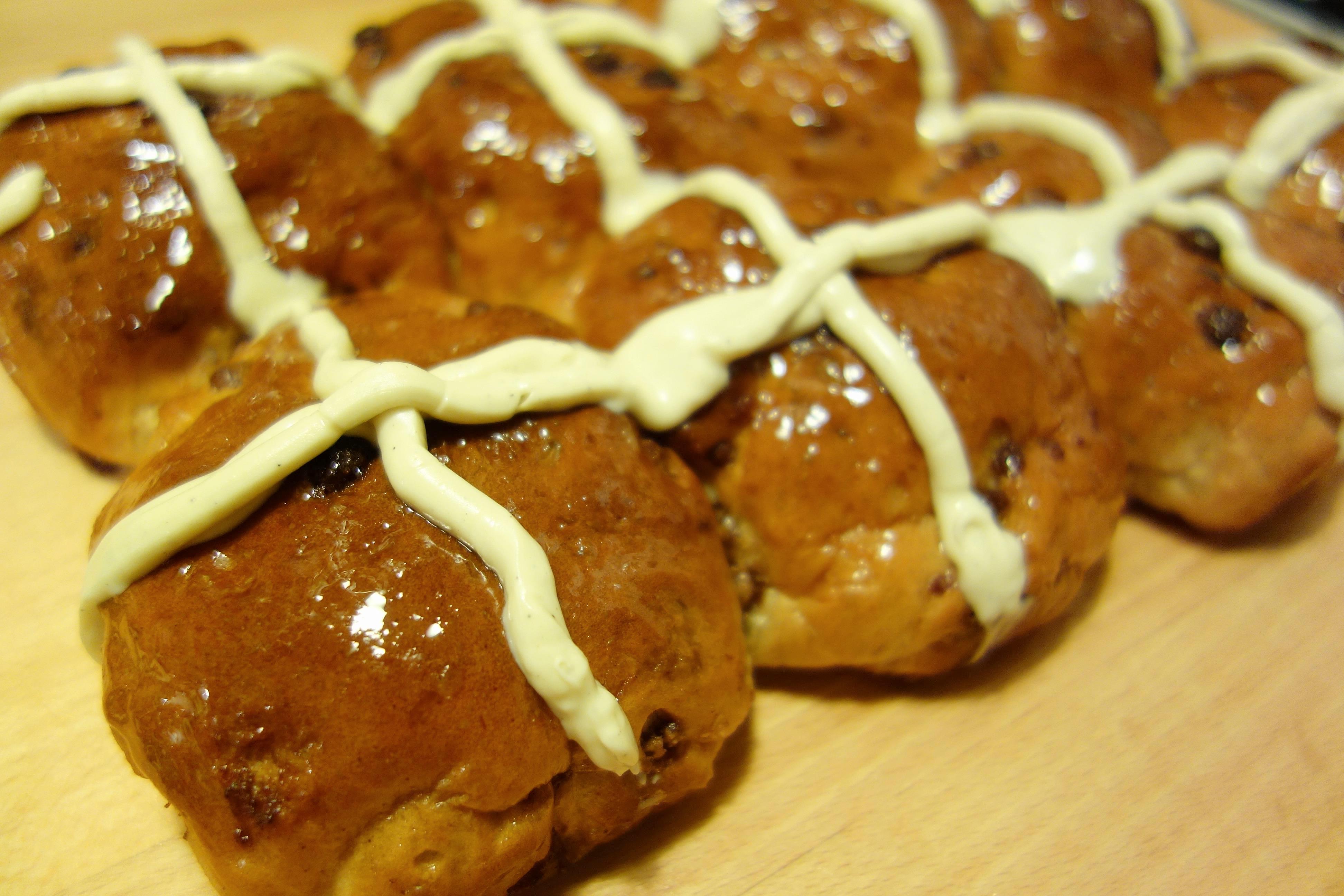 I really hope you enjoy these as much as I did.