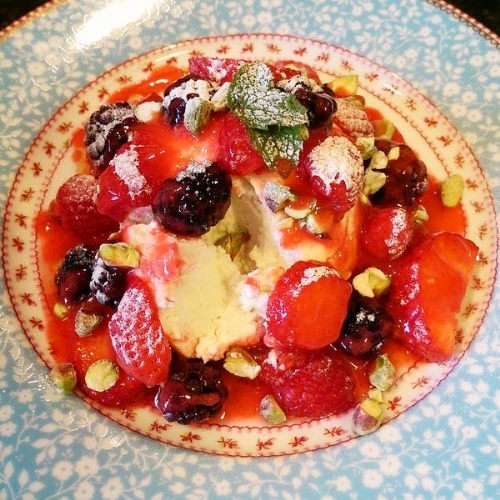 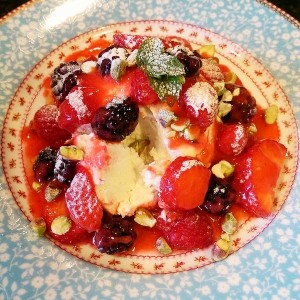 One of my favourite desserts is Greek yoghurt with mixed berries and honey. Very simple, but delicious. Recently, I had labneh, a strained yoghurt, in a salad and remembered how much I liked it.  So yesterday, I decided to strain the Greek yoghurt I had in my fridge, and make it into labneh instead. I sweetened it slightly with honey and a little vanilla extract before I strained it, then just topped with more honey, some mixed berries and some raspberry coulis.  I decided to top it off with pistachios to add some colour. The labneh was thick and creamy, the berries were sweet and juicy, the honey added to the sweetness and the pistachios added some lovely crunch to the dish.

This serves 2-3 people, depending on how hungry you are.

To make the labneh, you need to start this dish the day before you want it, as the yoghurt needs time to strain.

Simply add the yoghurt to a mixing bowl, squeeze about 1 tbsp of runny honey into the bowl, and 1 tsp of vanilla extract and mix together. 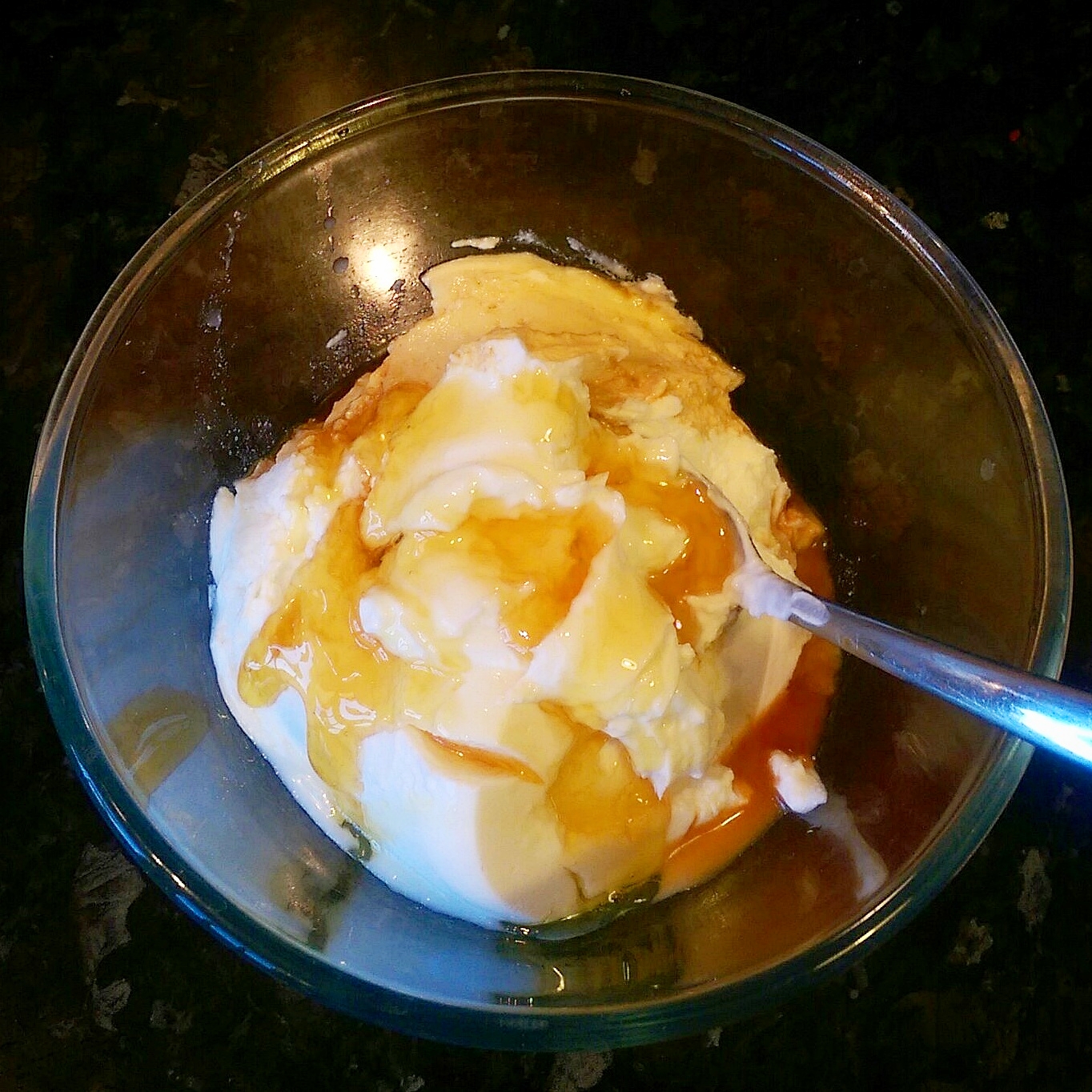 Over another mixing bowl, place a sieve and line it with a large piece of muslin. Pour the yoghurt mix onto the muslin cloth 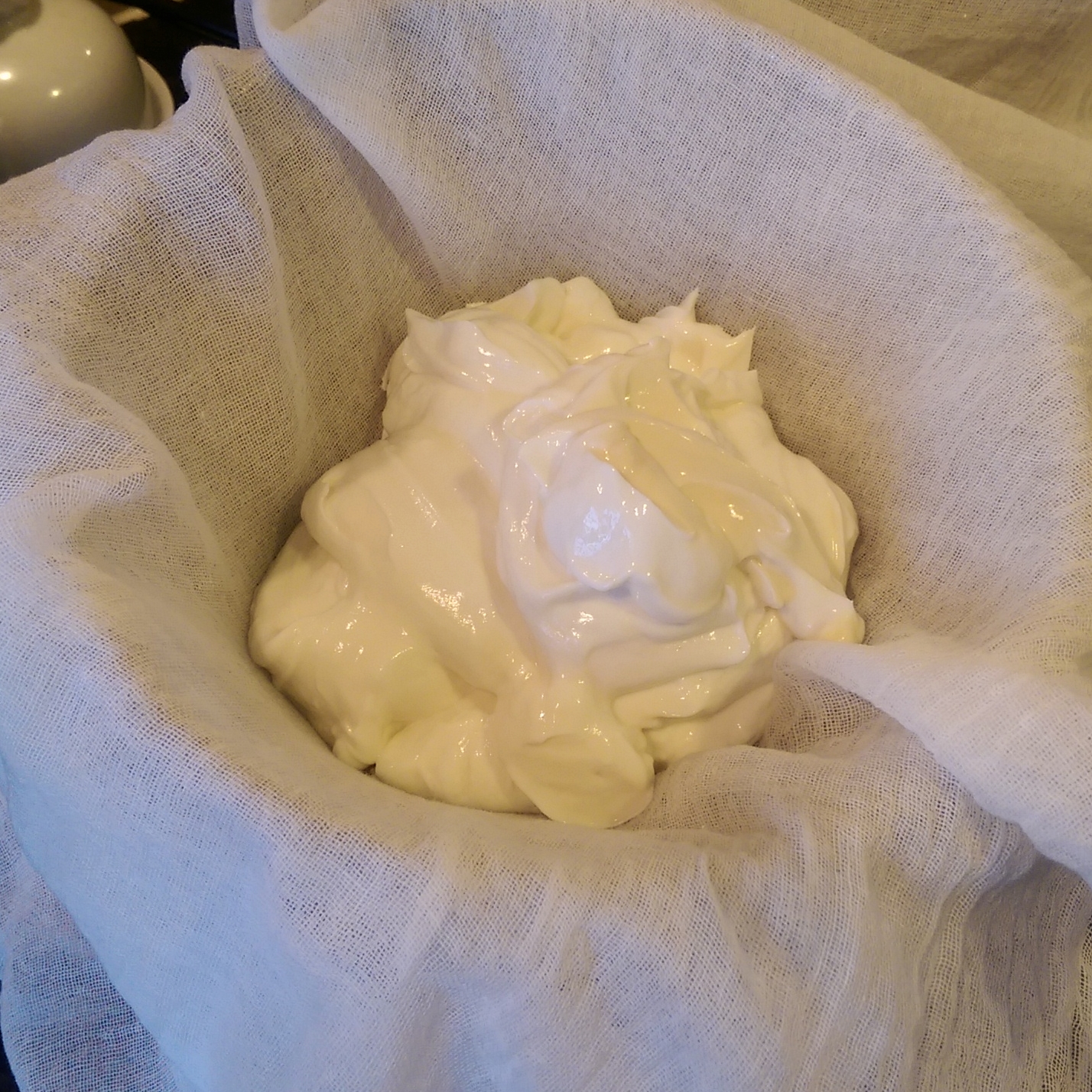 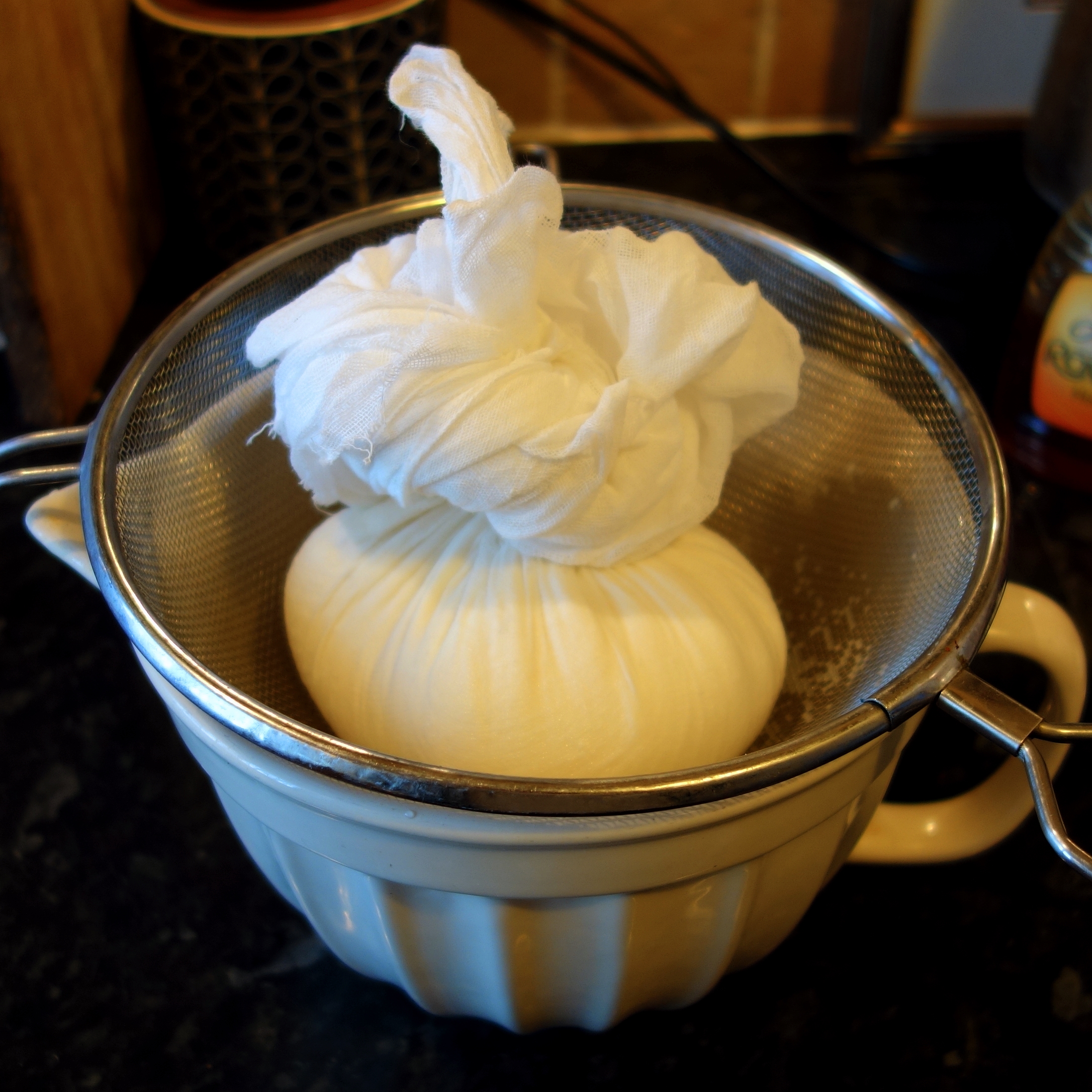 Then place it in the fridge overnight or for a few hours. The longer it strains, the thicker it gets.  If you don’t have time to leave it overnight, just leave it for as long as you can, then wrap a clean tea towel around the muslin and twist and squeeze it until all the excess liquid has been squeezed out into the bowl.

Once its ready, untie the muslin and gently remove the labneh.  It should be thick and resemble cream cheese. Place this on a serving dish. 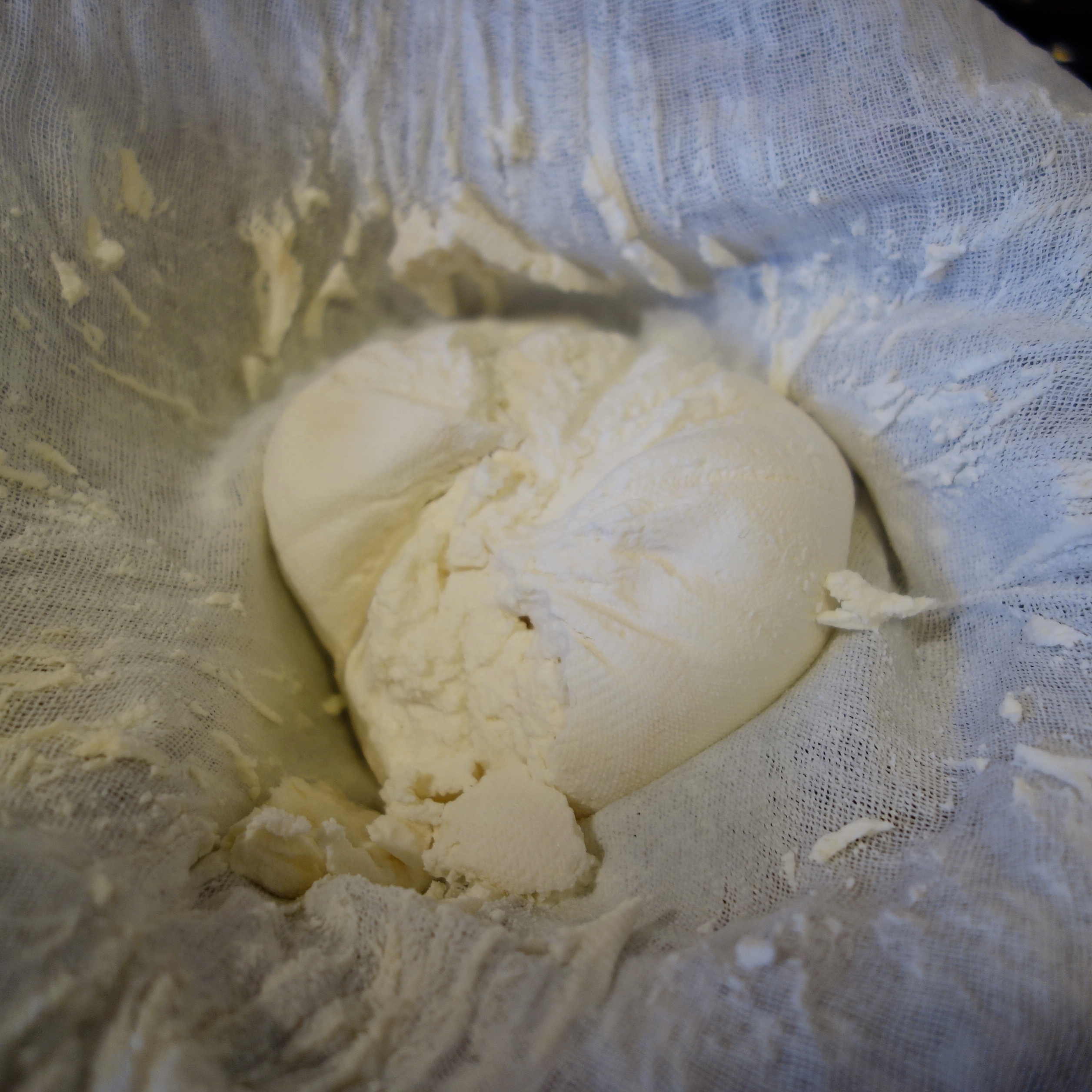 To make the raspberry sauce, place 150g of the raspberries, the icing sugar and a splash of water in a food processor and blitz until smooth. Strain through a sieve to remove the seeds and add a squeeze of lemon juice (if you have some), then put to one side.

Then its just a case of assembling the dish.  I start by drizzling some more honey over the labneh… 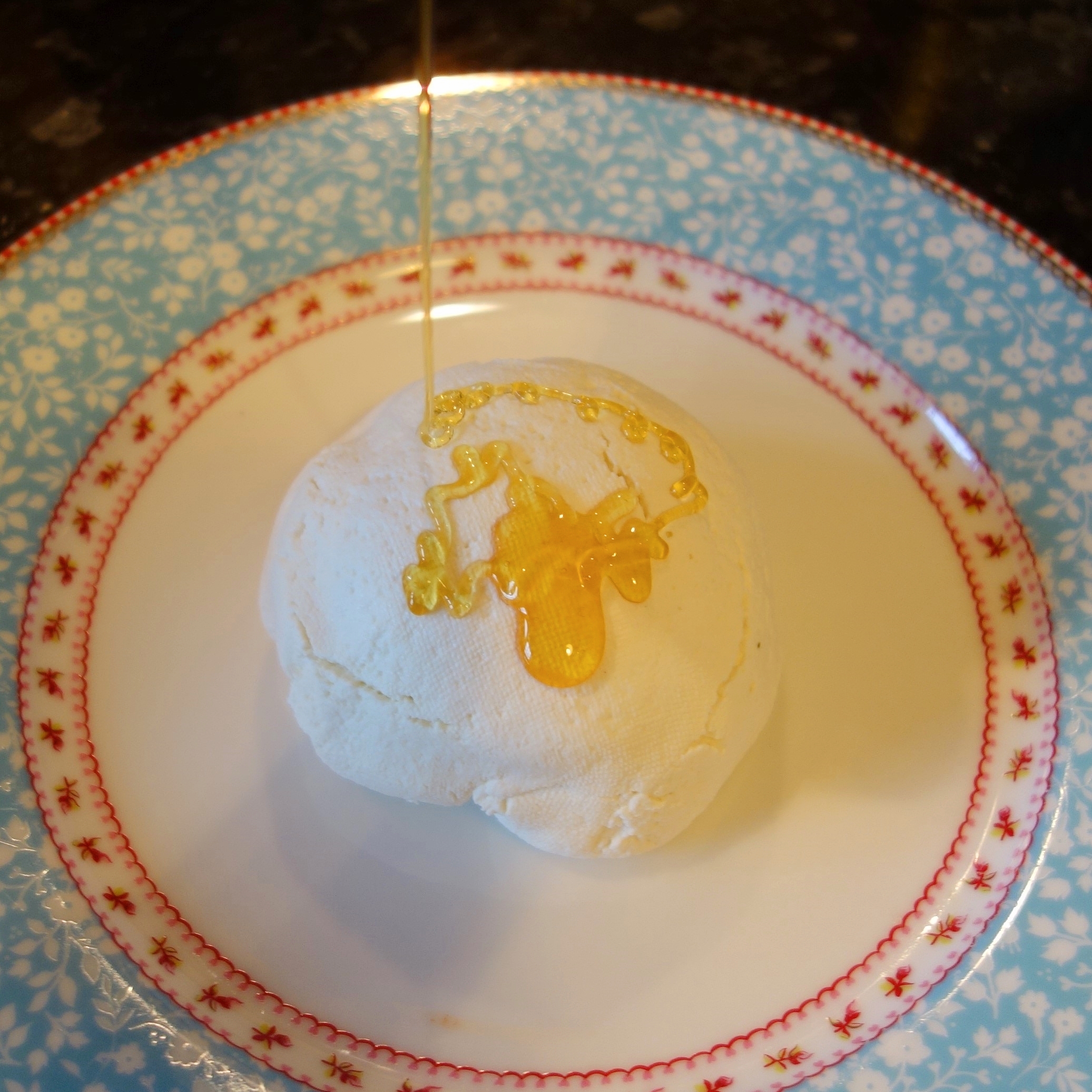 Then just scatter your choice of berries on top and around it, pour the raspberry sauce over the berries and then add some chopped pistachios and garnish with some fresh mint.

And there you have it…a creamy, delicious, healthy dessert! 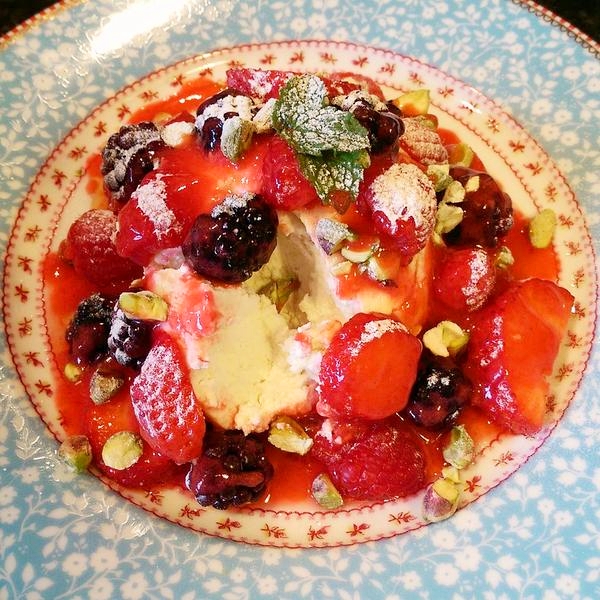