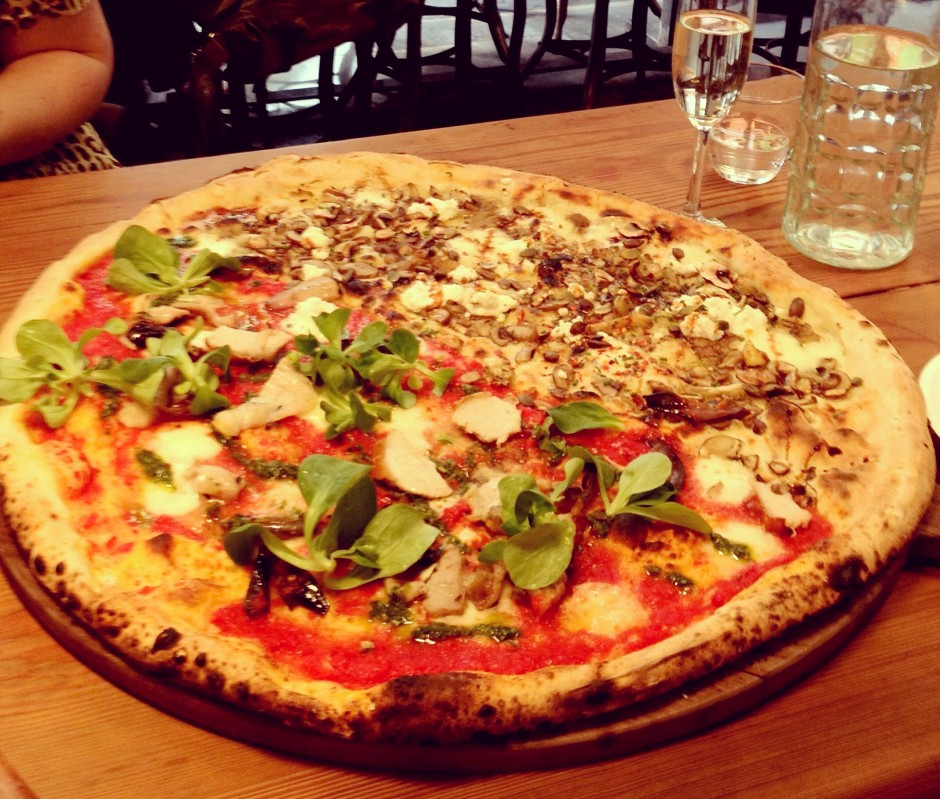 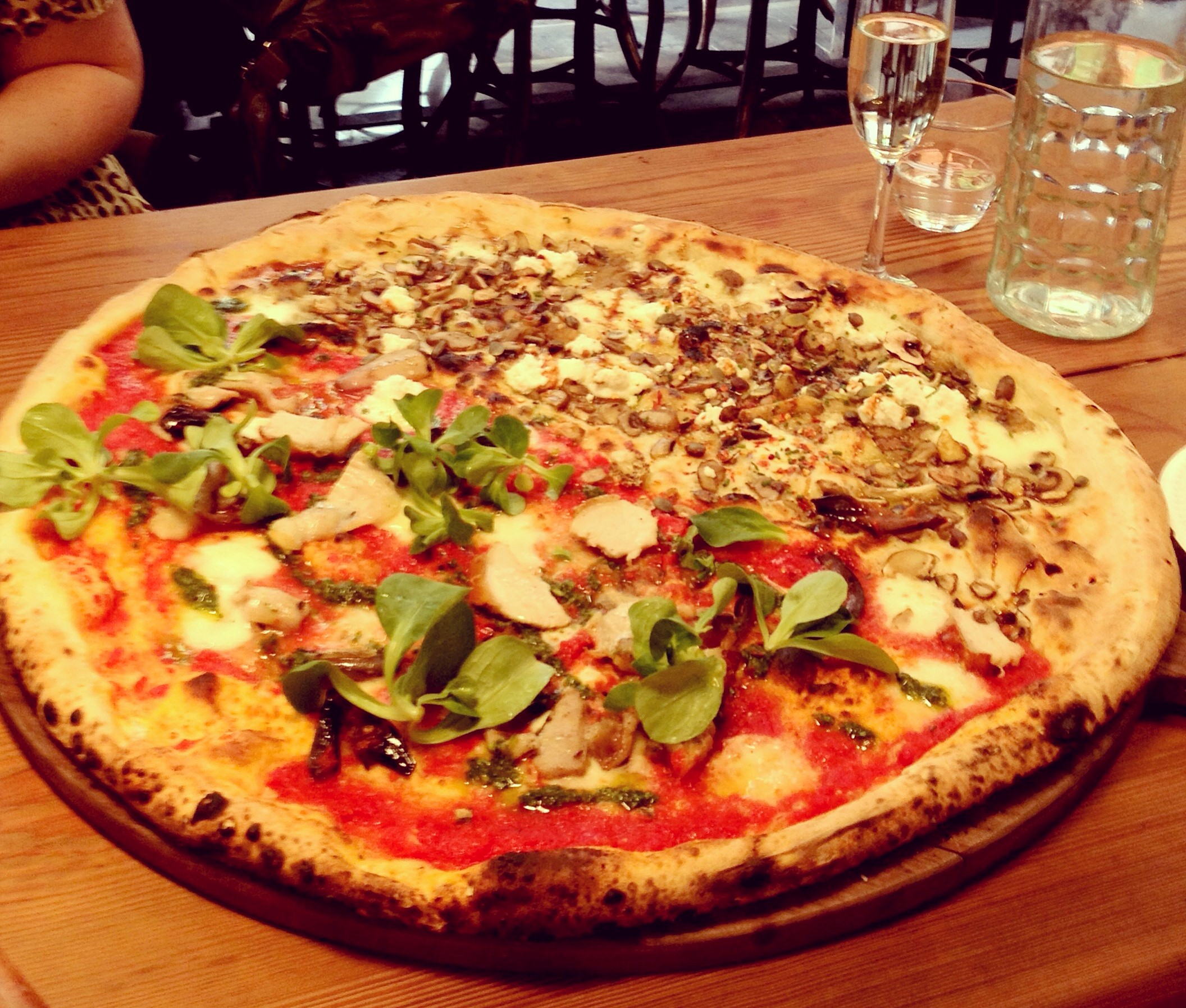 Last weekend was a heavy one. I was at a fantastic wedding on Saturday and on Sunday I celebrated my birthday with drinks at the Boundary Rooftop.  I had a wonderful afternoon surrounded by friends and a LOT of wine.  Knowing that I would be drinking a lot over the weekend, I had booked Monday off work so I didn’t have the Sunday ‘fear’ on my birthday, and also so I could be leisurely hungover instead of pretending to look like I was being productive in the office whilst wishing I could just go to sleep under my desk. God I HATE being hungover at work.

So inevitably, I woke up with a thumping headache on Monday morning and felt like death. Luckily, one of my favourite people in the world, the fabulous Cassie, texted saying she had just landed in London from LA and wanted to hang out that afternoon. Perfect! Cassie is one of my main eating partners and I had missed her while she was working in the States. I suggested we try out Homeslice as they had opened in Covent Garden while she was away.

I first discovered Homeslice with Cassie a year ago when we were eating our way around Hackney one Saturday.  I had never tasted such incredible pizza before and they immediately became my pizza benchmark. I know many rave about Franco Manca and yes, they’re very good, but I still think Homeslice is better.

Cassie and I got to Neals Yard in Covent Garden that afternoon…quite a luxury to be eating and drinking and enjoying yourself when you’d normally be stuck at your desk in an office.  The restaurant was quiet, but it was mid-afternoon. 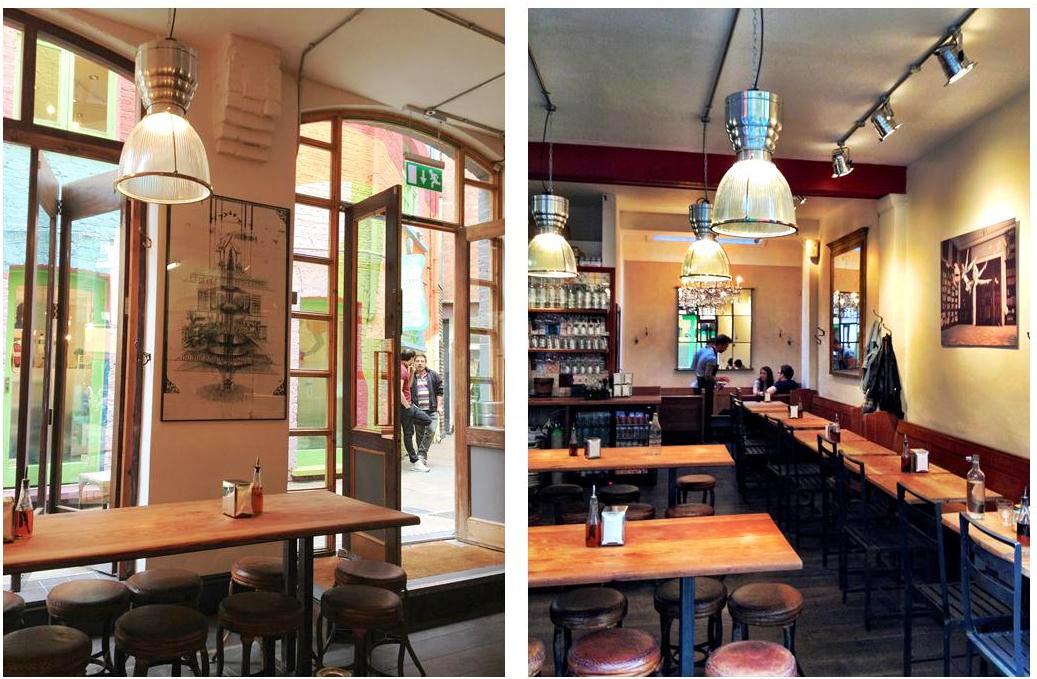 There is a lovely feel to the space. As it was a hot day, the windows and doors were wide open. There are two long wooden tables with leather stools which I imagine can get pretty cosy in the evenings when its rammed full of customers.  The walls are adorned with large vintage stained mirrors and huge lamps and chandeliers hang from the ceiling.  Its actually quite a relief not to see filament lightbulbs for a change. 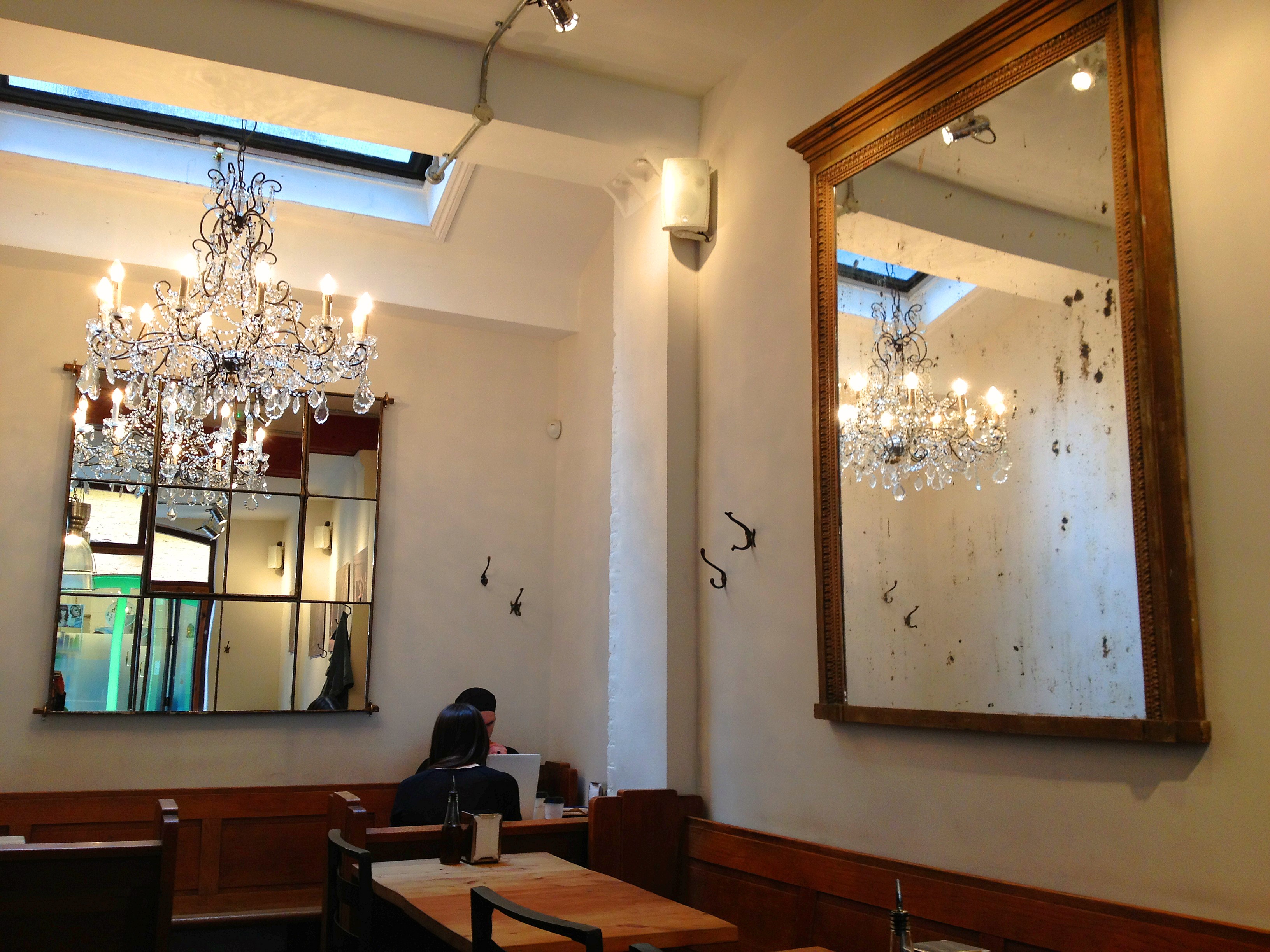 My favourite feature of the restaurant is a stunning drinks station with prosecco on tap. Yes please! 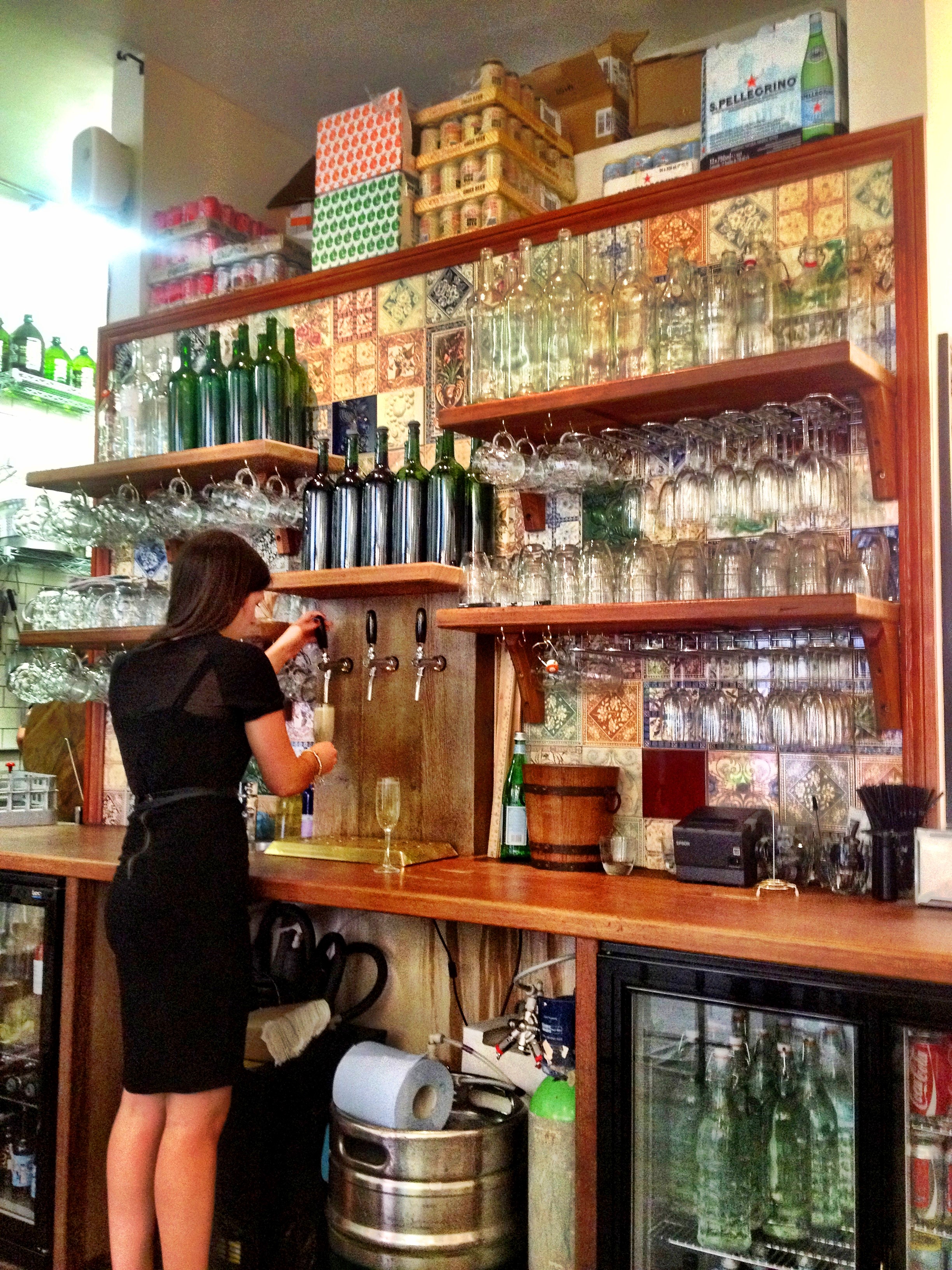 So of course, two glasses of prosecco were ordered then Cassie and I studied the menu. 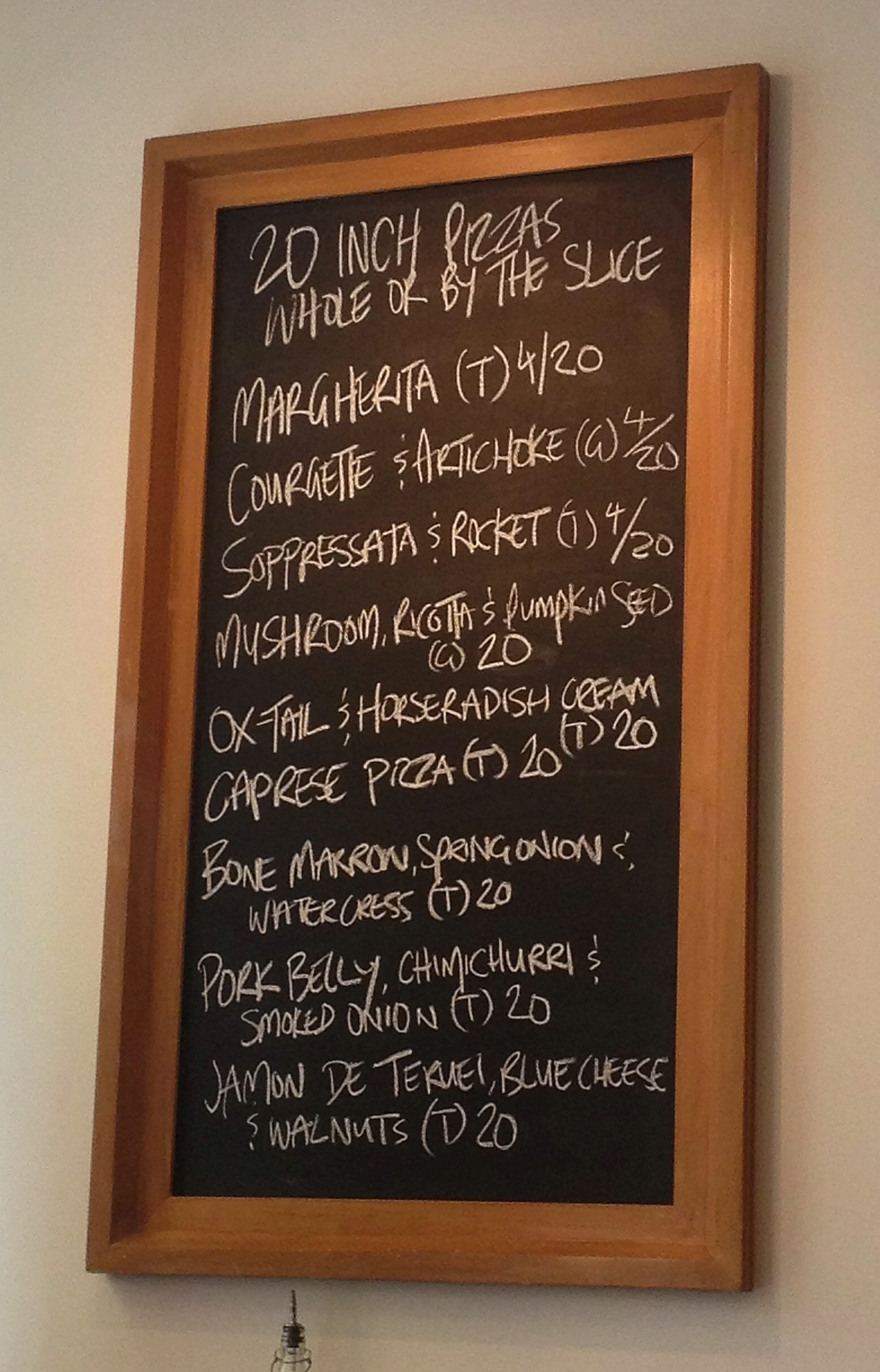 All options sounded fantastic so we wanted to try as many as possible.  The pizzas come in two options – a slice or as a 20″ pizza.  We decided to get a 20″, half pork belly with chimichurri and smoked onion, and the other half mushroom, ricotta and pumpkin seed. We also decided to get a slice of the courgette and artichoke pizza which appeared first… 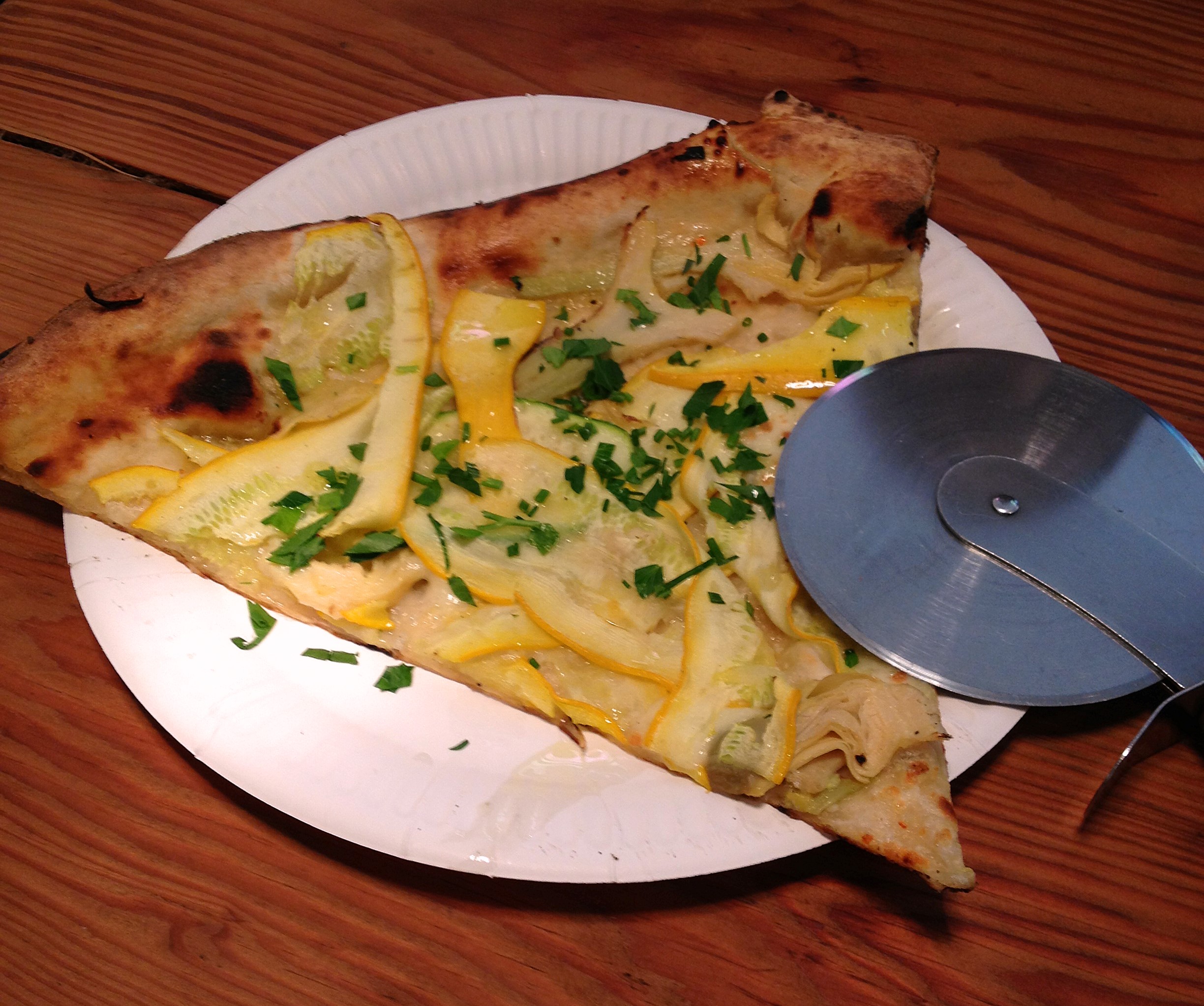 It was absolutely delicious. Light and fresh and so vibrant in both colour and flavour. It was the perfect summer slice.  There was no tomato base with this slice, it had a garlic oil base which was perfect with the toppings.  And with the base being so thin, I loved it.

Just a few moments later, the largest pizza I have ever seen landed in front of us. 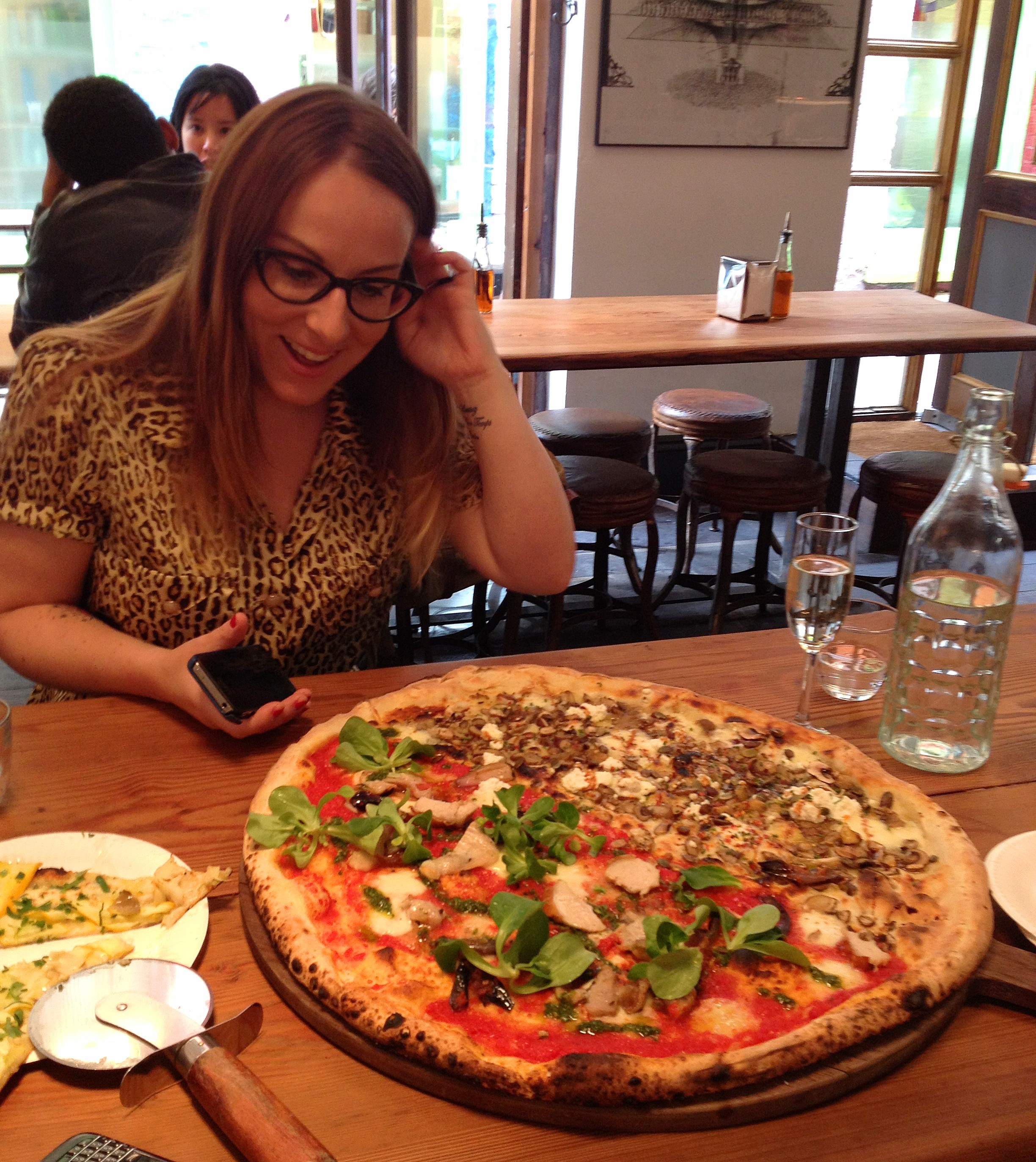 The pork belly side was stunning. Sweet tomato base, smokey onion and tender, salty pork belly slices. It was a delight.  Unfortunately, the mushroom, ricotta and pumpkin seed side had a generous sprinkling of chilli flakes, not mentioned on the menu. Odd, as the amount on there really did warrant a mention, and annoying because I can’t eat chilli and it did take the shine off that side of the pizza.  I did manage to eat around some of the flakes and it was incredibly tasty, but next to the pork belly side, it paled a touch in comparison.

The base was thin with crunchy with slightly charred crusts and had a soft, supple, chewy middle that could easily be folded.   Not soggy.  Cassie thought some parts were a bit on the burnt side but I think that will change from pizza to pizza.

The toppings were punctuated with soft dollops of cheese which gave a creamy depth but subtle enough that it didn’t drown the accompanying flavours.

I wholeheartedly recommend everyone to go to Homeslice. I loved it and I’m not even a huge pizza fan.  They are still my London pizza benchmark.  On top of this, the staff were lovely.  There when you needed them, absent when you didn’t. They were friendly, chatty and knowledgeable and the bill was pretty good too. Definitely worth a visit.