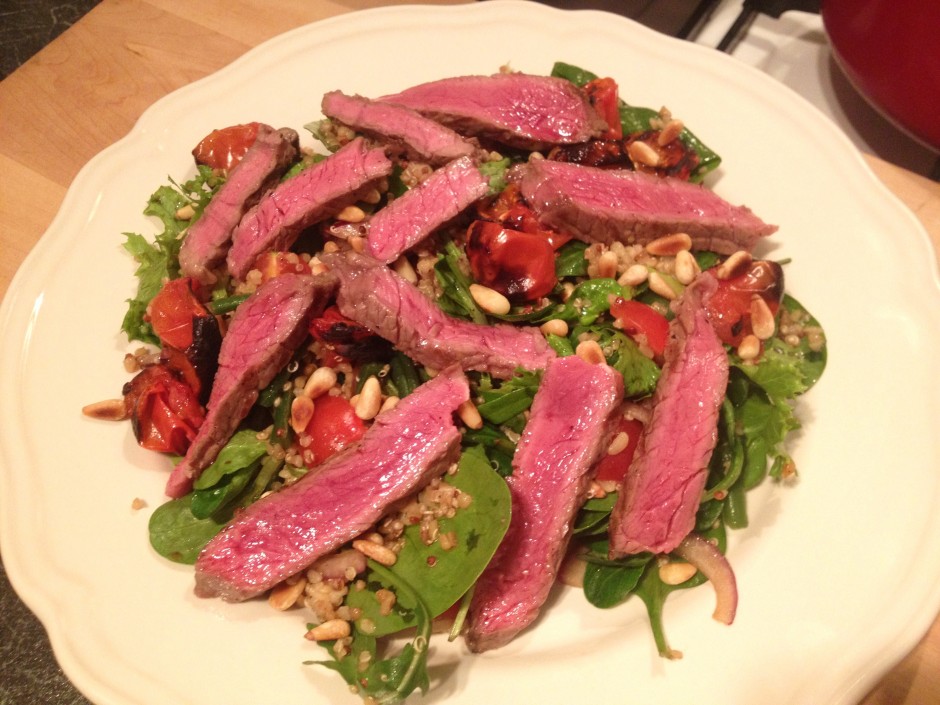 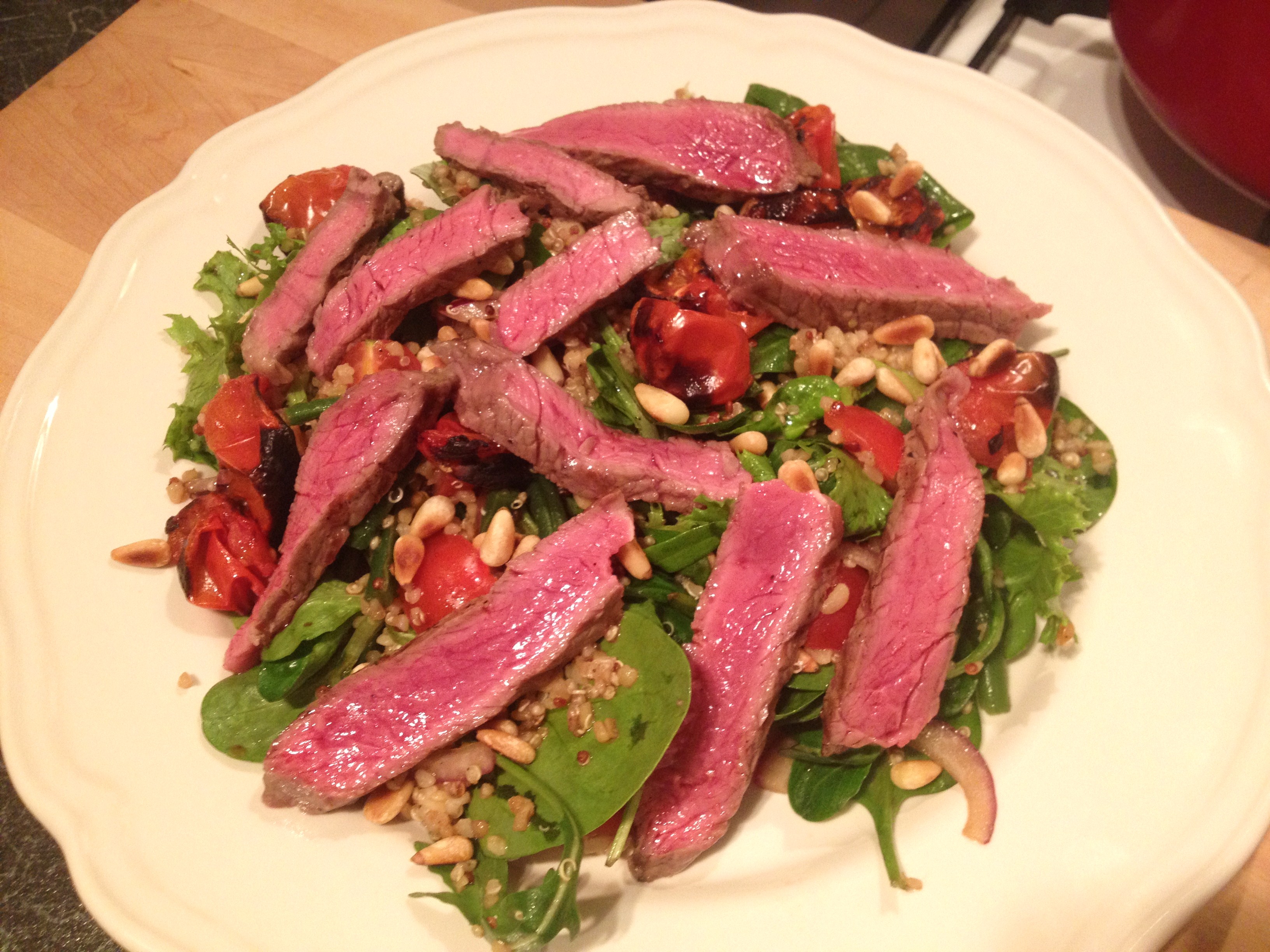 My last post detailed how I am having to change how I eat to help me train for the London Marathon. As you know, I LOVE my food.  But the food I normally eat doesn’t sustain me when I’m running for 2 hours at a time.  I have found that instead of feeling energised when I run, I am feeing utterly exhausted.  When I come back from a run, I just want to go to bed. The last two Saturday nights, I’ve been in bed before 9pm!  Last night I was ready to go to bed by 7pm! Madness.

I mentioned this to a few people at my bootcamp classes and one of them asked if I eat a of iron.  Thinking about it, I don’t.  I don’t eat a great deal of red meat. Yes, I have the odd burger but they’re not exactly ‘lean’ and I don’t eat them that often. So on my way home from bootcamp I popped into Waitrose and bought a fillet steak and two large bags of spinach.

I decided to make a steak salad.  So I pan-fried the steak in a little oil and lots of seasoning on my griddle for a few minutes on each side and then I wrapped it in some tin foil and left it on the side to rest.

While it was resting, I cooked some quinoa.  I have recently discovered quinoa after a couple of friends recommended it to me.  I’d heard about it of course, I just hadn’t tasted it before.  I always figured as it was healthy (high in protein and complex carbohydrates which is exactly what I need when training), it probably wouldn’t taste that nice.  I was wrong.  I had also heard that red quinoa has a bit more flavour than white so I was really pleased to find this red and white quinoa mixed with bulgar wheat when I was in Waitrose. It tastes really good, nice and nutty.  It takes just 12 minutes to cook, so a lot faster than rice.

I also decided to steam some green beans, grill some cherry tomatoes and toast some pine nuts so there was a good mix of flavours and textures.

After 10 minutes, I unwrapped the steak which was gloriously pink and juicy, and sliced it. 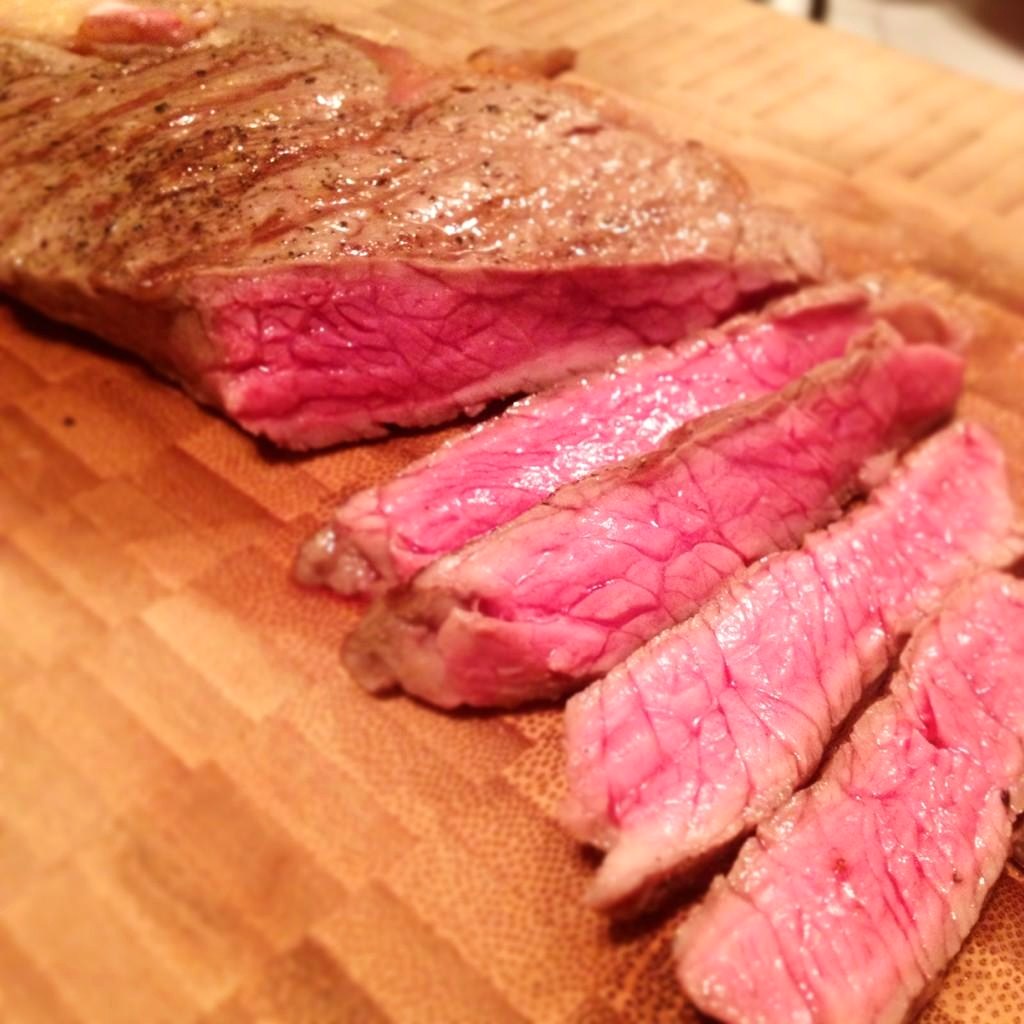 In a large mixing bowl I placed two large handfuls of baby spinach, some thinly sliced red onion, some fresh cherry tomatoes and the grilled cherry tomatoes and the steamed green beans. Then I added the cooked quinoa and bulgar wheat mix (about a cup) and the toasted pine nuts.  I added a drizzle of extra virgin olive oil and a little Belazu balsamic vinegar and seasoned with good salt and pepper.

I mixed it all together then plated it up, strewing the slices of juicy steak over the top. 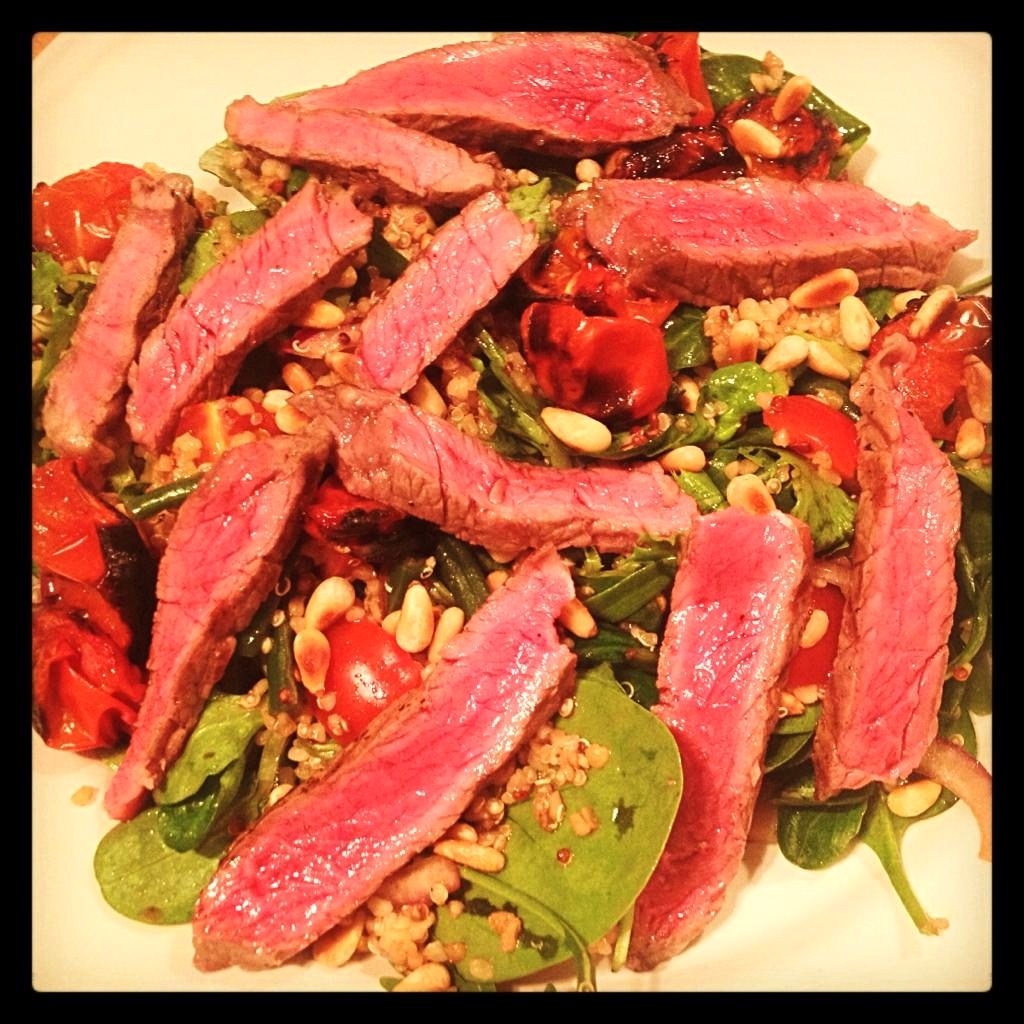 And there it was…a meal that was healthy, high in iron and yet, absolutely delicious. It didn’t feel heavy at all, it felt light and fresh and yet it was packed with flavour and lots and lots of goodness.