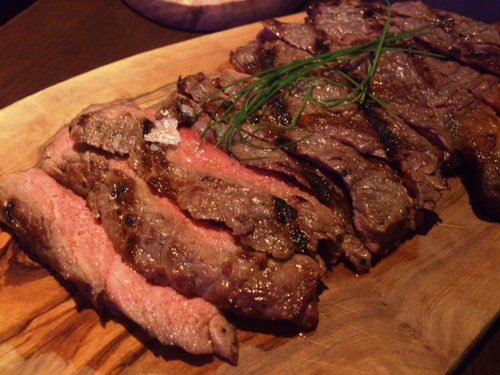 I first ate at DSTRKT in April (see my write up here) and had a fabulous night with my friends Paul and Heath. We were impeccably looked after by the maître d’ Guillermo and decided there and then that we would return for my birthday.

So a couple of weeks ago, we returned. Unfortunately Guillermo was no longer there (although he did text me to wish me a happy birthday which I thought was incredibly thoughtful) and I must say, we all missed him. The waiter and waitress we had serving us were both lovely and pleasant but the level of service was a tad lacking since Guillermo’s departure. Saying that, the hostess for the evening couldn’t have been nicer or more helpful.

When we sat down, Paul and I immediately asked if we could substitute our first course of Maldon rock oyster for something else. Paul said he couldn’t bear to watch me try to swallow another oyster! (see my last review). They were fine with this and gave us venison tartare instead. Albeit it the size of a thumbnail. It was very nice, but literally gone in one mouthful. Next came the yellow fin tuna cubes with soy air and avocado mousse. I loved this when I had it the first time but I felt slightly disappointed in it this time. Something wasn’t quite right. There was a very strong tasting droplet of olive oil on the plate and it overpowered the flavour of the tuna. Paul and I took our bites at the same time and immediately looked at each other with puzzled expressions. It was definitely not as good as last time. Next it was Saudi prawns with charred scallions oil. Sweet and meaty, this was delicious. Then came a dish we had (and loved) last time…grilled flatbread salad with macadamia nut pesto. This was as good as we remembered. Peppery rocket, soft goats cheese, punchy olives, soft sweet peppers and tomatoes all contrasting beautifully with the crunchy flatbread. I loved this.

And then the main event…the Scottish rib eye steak, sliced and cooked to perfection, served with a Talisker whisky sauce. To accompany this, a pot of wild mushroom, fresh herbs and madacadmia nuts, with an egg nestled on top. When the waitress removed the lid of the pot, she broke the yolk and mixed it into the mushrooms. Wow! This was beautiful. Tender, juicy, melt in the mouth beef and earthy, nutty wild mushrooms. Stunning. The addition of the egg yolk really added to the richness of the mushrooms. This was an incredible dish. Meanwhile, Heath, who is vegetarian, and joined us mid-meal, ordered the truffle potato gnocchi with cheddar espuma. I wasn’t really paying much attention to it until I heard what can only be described as orgasmic noises coming from Paul. He had tried a bite of Heath’s gnocchi and his eyes were about to pop out of his head. So of course, my fork immediately found its way to Heath’s plate. Cue the same noises and eye-popping. This was A M A Z I N G !!

So even though Paul and I were eating off the tasting menu, we ordered an additional serving of truffle gnocchi to share and add to our already expanding waistline! Totally worth it though. The gnocchi were slightly crispy on the outside so I think they must have fried it after having cooked it. This was a lovely touch. Sometimes I find gnocchi a bit bland in both texture and taste but these were stunning. The truffle and cheddar sauce was divine. Light and foamy in texture but rich and deep in flavour. I think this was the dish of the night. Then it was time for pudding. The first plate was Chocolate S’mores…cider sabayon, chocolate custard and Gram Cracker crumble, with some toasted marshmallow cubes. And ice cream…I think it was blackcurrant and vanilla. I’m not entirely sure. (I’d had a LOT of wine by this stage!) I was a bit underwhelmed by the pudding to be completely honest. It just felt like lot of different ingredients placed on a plate without it really coming together.

Overall, we had a lovely night but we missed Guillermo. Also, the food was still coming out of the kitchen rather quickly and I would have appreciated more time to enjoy my wine. As it was, I felt like I was playing catch up all night. And when the wines are supposed to match each dish, that isn’t ideal.

Certain dishes stood out…the truffle gnocchi in particular, while others failed to deliver…the tuna cubes and the dessert. But we still had a great meal, although it didn’t shine like our last meal.

In terms of the service, we had to keep a constant look out for the waiter in order to get his attention. However, when he was with us, he was very friendly. Just not quite as attentive as Guillermo had been on our last visit.

DSTRKT is a restaurant and a club and the night we were there was the same night Hackney Weekend kicked off, and a few of the stars of that were expected to be partying at DSTRKT later that night including Jay Z, Rihanna and Rita Ora. So by the end of our meal, the place was really filling up. We decided to move into the club after our meal but we were told we would have to walk back up to the front door, pay £20 each and get a stamp. Hmmmm…we’d already paid about £100 each for our food so paying another £20 each to literally pass through a curtain and drink just a few feet from our table was a tad galling.

We did pay to get into the club but only stayed for one drink and decided to move on to another club to dance the night away.

I really like DSTRKT’s food and they have some excellent wine but I’m not sure if I would go back. Perhaps for the a la carte menu as opposed to the tasting menu. And actually, I think I’d climb over my dead Grandmother to get to that truffle gnocchi again! For that, I would return.