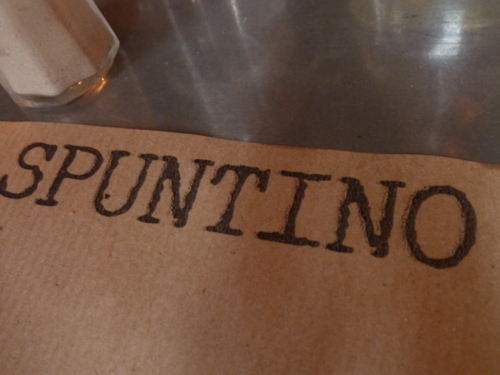 Oh. My.God. I was introduced to one of the best restaurants I have ever eaten in last night. Yup, the diet didn’t just fly out of the window, I literally batted it out of the window! And my goodness, it was worth it!

Spuntino is quite simply amazing. In amongst the sex shops of Soho, it’s easy to miss. You wouldn’t know it was there unless you were headed to it – the front looks nothing like a restaurant. I must have walked past it dozens of times. Once you’re inside, you feel like you’re in Brooklyn. It has a very New York feel to it. It is small yet beautiful, with distressed, white glazed tiles and low-wattage bulbs hanging low over the bar/eating area – very basement chic! The food comes served on old school enamel plates and the drinks in mismatched tumblers. The atmosphere is fun and noisy. There’s a real buzz to the place. Spuntino translates to ‘snack’ or ‘bite’ in Italian. However, despite the name, the menu feels very American. It features sliders (mini burgers) and grits, ‘zucchini’ and ‘eggplant’. Serving everything in small plates is perfect for me as I prefer to have lots of bites of different dishes so I can taste as many things as possible. My friend and I decided to order in two rounds so we weren’t bombarded with food in the one go. We wanted to relax and enjoy everything rather than rush to eat everything while it was still hot. It was a good plan!

My heart started beating wildly as soon as I looked at the menu…I wanted to eat everything on it! To be fair, between my friend and I, we worked through quite a lot of it!

We started by ordering boiled egg and soldiers, eggplant chips with fennel yoghurt, a pulled pork slider and truffled egg toast. First to arrive were the chips – small wedges of soft, smokey aubergine rolled in a sesame mix and fried until crunchy – these were really delicious. Aubergine is a favourite of mine and this was so tasty I could easily have ordered more. I’m not normally a fan of fennel but the fennel yoghurt complimented it very well. Then we got the pulled pork slider. This was amazing. Soft, melt in the mouth pulled pork with crispy crackling and thin slices of apple in a soft bun. Every bite of the crackling practically exploded in your mouth and in contrast to the soft pork, it really was delicious. Next came the egg and soldiers. The soft boiled egg was encased in a crunchy crust with a delicious smoky aftertaste and the yolk was lovely and runny. But then it came…the truffled egg toast. Wow! This is possibly one of the best things I have ever eaten! It is a thick slab of bread, hollowed out in the centre with a truffle infused egg dropped in and then covered in Fontina cheese and grilled! Heaven! The smell alone almost stuns you into submission. Our cutlery kept clashing as we fought to cut into it! There is an explosion of flavours as you eat it – the runny yolk, the melted cheese, all underlined with the earthiness of the truffle oil. My friend and I tend to talk a lot whilst eating. Not this time! We just kept looking at each other in wide-eyed excitement with lots of “Oooohs” and “Mmmmmmmm!”s. Once we finished, we were feeling quite full but not uncomfortably so. We decided on our next round of food – mac & cheese, steak and egg and shoestring fries.

The shoestring fries were lovely. Really crispy and tasty but my friend had to remind me that we had macaroni coming so I stopped shoving them down my throat! The steak was beautifully cooked, juicy and full of flavour and the fried eggs that came with it worked perfectly. The mac & cheese arrived just as I was beginning to think that I should probably stop eating soon! I loved this, although my friend wasn’t as taken with it as I was. It was creamy, cheesy (fontina, mozzarella & parmesan), and topped with crispy breadcrumbs – everything you could want from mac & cheese. But even better….there were leeks through it and wholegrain mustard had been stirred through as well. It tasted sublime. And it would probably taste even better if you hadn’t just stuffed your face beforehand! Just as I was deciding that there was no way I could eat dessert, the three men next to me had their desserts delivered. One of them had ordered the ‘peanut butter and jam sandwich’ but this was so much better than it sounded – the ‘bread’ is made from peanut butter ice cream cut into thick triangles, with thick raspberry jam in the middle and crunchy bits and pieces sprinkled all over. He was eating it with his eyes closed so I took that as a good sign! One of his friends had the brown sugar cheesecake and the other had the chocolate, pecan and whisky cake. Each of them raved that theirs was the best.

I decided I could probably squeeze some dessert in so I opted for the brown sugar cheesecake. I didn’t think that I would particularly enjoy this as I was so stuffed, but enjoy it I did! Sometimes you get cheesecake and its like a brick but this was nice and light yet rich. You could taste the caramelised sugar but it didn’t taste too sweet. It was really well rounded and came with ‘drunken’ cherries soaked in Bourbon. In conclusion, Spuntino is a proper treat. The staff are knowledgeable and friendly, the atmosphere is buzzing and the food was incredible. (The bill was very good too!). I could have stayed there all night but I would have kept eating and that really won’t do when I’m supposed to be squeezing myself into a bikini in 3 weeks time! As we were walking/waddling back to the train station, my friend and I decided that the best things we ate were the eggplant chips, the pulled pork slider and the truffled egg toast. Actually, who am I kidding? It’s all about the truffled egg toast! I would go back for that time and time again.

Please go and try this if you are in London but remember – there is no telephone number and they do not take reservations. You need to turn up and wait. But believe me, it’s worth the wait!