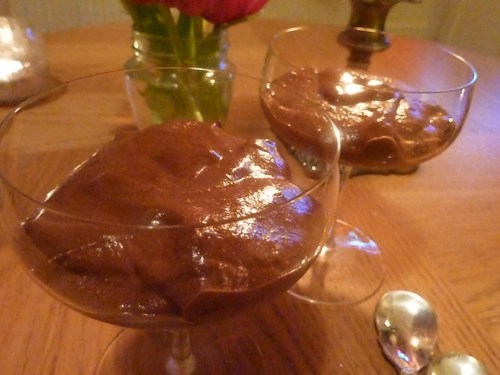 I recently bought The Skinny French Kitchen, a cookery book by Harry Eastwood. In it, she takes on the challenge of marrying her love of classic French cookery with a desire to maintain her waistline. Every recipe has been slimmed down to a fraction of its usual calorie count, without robbing it of flavour. I had friends round for dinner at the weekend so I decided to make her Mousse au Chocolat for pudding. I just wanted something easy and quick to make, which would satisfy my chocolate cravings, and my God, this did it!

Using 85% chocolate means that you’re stretching the chocolate flavour without adding to the quantity of chocolate used. The full chocolate hit in this mousse means that you don’t need to add cream, butter or egg yolks, all of which pack on extra calories.

Please try out this recipe if you can. I was amazed by how good is tasted and my friends would never have believed it was low in calories if I hadn’t told them. It is very moreish and because it tastes so light, you don’t feel like you’re eating anything, hence you can get through quite a lot of it! And yes, I do realise this defeats the point of having a calorie-light pudding!

The book says this recipe serves 6 people. I’d probably say 4 people though. I halved the ingredients as there were only 3 of us eating. I thought there would be enough for 3 helpings but instead, I found there was only enough for 2. But maybe that’s my portion sizes!

Method
Heat the chocolate in a large heatproof bowl over simmering water, making sure that the base of the bowl doesn’t touch the water, until the chocolate has completely melted. Set aside to cool. Using a spatula, beat one-third of the egg-white mixture into the cool chocolate mixture. You don’t have to be delicate here: it’s just a case of introducing the egg whites to the chocolate roughly. Next, delicately fold the second third of the egg white into the bubbly chocolate mixture until it is well incorporated and is getting yet more bubbly and light. Finally, when all the white air pockets have gone, fold the remaining egg white delicately into the chocolate mixture until the mixture is a uniform texture and colour.

(If you want to, you can add a little flavouring to the mixture at the stage when you’re folding the last of the egg white into the chocolate. You could add peppermint extract (¼ tsp is enough), or Grand Marnier (1 tsp is good) for a little bit of boozy orange flavouring. You could then use a garnish of mint leaves or grated orange zest.) Carefully pour or ladle the mixture into six pretty glasses and chill in the fridge for at least 30 minutes. If you wish, you can shave a little dark chocolate over the mousses using a potato peeler, for decoration before serving.

This pudding really was melt-in-the-mouth delicious. It was light, fluffy and gave you a proper hit of chocolate. I think it needs the 85% chocolate in order to do this.

You can buy The Skinny French Kitchen on Amazon –http://www.amazon.co.uk/Skinny-French-Kitchen-Harry-Eastwood/dp/0593066464