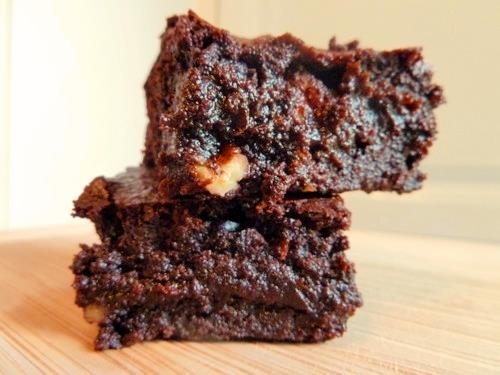 Over the last couple of weeks I’ve been very lazy in terms of cooking. For some reason I’ve been feeling really tired and lethargic and not in the mood to spend time cooking or baking and instead I’ve been relying on take aways or fast food (probably why I’m feeling so tired and lethargic!).

Anyway, this morning I woke up early with an urge to bake something. Hooray! I decided on brownies. I have tried loads of different recipes for chocolate brownies…Nigella’s, Marcus Wareing’s, Bill Granger’s, Delia’s…but today I fancied trying Jamie’s.

I was initially quite surprised by the amount of sugar and butter that was required (especially coming from Jamie), but I figured I should follow the recipe to the letter the first time I tried it, then I can modify it the next time.

In a large bowl over some simmering water, melt the butter and the chocolate and mix until smooth. Add the nuts, if you’re using them, and stir together. In a separate bowl, mix together the cocoa powder, flour, baking powder and sugar. Combine this with the chocolate and nut mixture. Stir together well. Beat the eggs and mix in until you have a silky consistency. Pour your brownie mix into the baking tray, and place in the oven for around 25 minutes. The brownies should be slightly springy on the outside but still gooey in the middle. Allow to cool in the tray, then carefully transfer to a large chopping board and cut into chunky squares. Verdict: These taste amazing! I like my brownies to be nice and gooey in the middle and these were perfect. Although I think I will reduce the amount of butter the next time. The mixture was really quite greasy before it went into the oven and again, when they came out of the oven. They are also incredibly rich, which isn’t a problem for me personally. The next time I make them I think I will reduce the butter from 250g down to 180g and I think I could also afford to reduce the sugar from 360g to 300g.